The part of the country lies on the south side of the Alps and is largely surrounded by Italy ; in the north and northeast it borders on the Swiss cantons of Valais and Uri . Campione d'Italia forms an enclave in the canton of Ticino. The area of ​​the canton of Ticino is 2812 square kilometers, which corresponds to seven percent of the total area of ​​Switzerland. About a quarter of the area is considered unproductive and a third of it is forested. The two large lakes Langensee and Luganersee set important accents .

In terms of vegetation, the extensive forests of sweet chestnuts are particularly rich in flora . Otherwise they only exist in a few areas of the world in this purity and area. In addition, countless palm trees, cypresses and other Mediterranean plants thrive in the canton of Ticino. This is why the canton is known as the “sunny corner of Switzerland”. The Italian-speaking Graubünden regions, on the other hand, are decidedly mountainous in both flora and fauna. 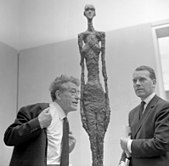 The Locarno Festival on the Piazza Grande in Locarno

The region's cultural life is primarily oriented towards northern Italy , although there is also a lively exchange with the other three language regions of Switzerland. Historically, the identity of this part of the country has always been shaped by a certain dualism, between the clear political affiliation to Switzerland and the important cultural bridge to the neighboring state of Italy.

As representatives of the Italian culture of Switzerland, the members of the Giacometti family, especially Alberto Giacometti , should be mentioned, who come from the municipality of Stampa in Grisons. The Mendrisio- born architect Mario Botta also achieved international fame and worked in Basel (the second seat of the Bank for International Settlements ), in Tel Aviv / Ramat Aviv (Cymbalista Synagogue, Tel Aviv University campus ) or in San Francisco ( San Francisco) Museum of Modern Art ) completed buildings of international renown. With regard to cultural exchange with other-lingual areas of Europe, for example, the poet and writer Hermann Hesse found in Montagnola (where there is also a museum set up in honor of the poet), the psychoanalyst Erich Fromm , the painter Paul Klee and the writer Erich Maria Remarque in Locarno a new home.

At the beginning of the 20th century, on the hill Le Monesce near Ascona , the so-called "Monte Verità" ("Hill of Truth"), an artist colony developed in the midst of nature and supposedly away from industry and the urban centers of northern Europe was looking for new forms of coexistence and made the place in southern Ticino a new home for so-called "alternative thinking".

The city of Lugano also houses the “LAC” (Lugano arte e cultura) cultural center, which was inaugurated in 2015, while the renowned Locarno Film Festival has been held in Locarno every year since 1946 . Since 1985 the ten-day New Orleans Jazz Festival has also been taking place in Ascona at the end of June, which is called JazzAscona .

So far, all federal councilors in Italian-speaking Switzerland have come from the canton of Ticino:

At the national level, the canton of Ticino delegated to the legislative period 2015-2019 eight members in the National Council , while from the canton of Grisons from Poschiavo coming politician Silva Semadeni represents the Italian-speaking population of the region. In the Senate , only the canton Ticino sends two Italian-speaking members each.

The Swiss Federal Criminal Court is also located in Bellinzona .

From 1512 to 1797, as a subject area of ​​the Drei Bünde , the Valtellina also belonged to the area of ​​influence of the Confederation . With its detachment in the context of the Napoleonic Wars , the Italian-speaking areas of the Confederation and its associated places lost a large part of their area and population as well as spatial cohesion, so that today's Italian Switzerland is made up of three non-contiguous areas. Through the Agnelli printing house in Lugano and the newspaper "Gazzetta di Lugano" (from 1798) distributed from there, Italian Switzerland received an important regional mouthpiece in the 18th century for the dissemination of ideas and debates of the European Enlightenment . Because the freedom of the press was more strongly protected in Ticino than in the neighboring Italian regions, it also developed into an important place of printing up to the Risorgimento in the 19th century.

In 1803, Ticino was upgraded to a fully fledged canton and Italian was declared the official national language alongside German and French. For decades, the so-called capital question as an expression of the struggle between the various political forces of the region, i.e. between the liberals and clericals, would shape the canton of Ticino. It was not until 1878 that, after switching between Lugano , Locarno and Bellinzona , an agreement was finally reached on the latter as the sole canton capital. The Gotthard Tunnel , which opened in 1880, was also influential in this part of the country , but was driven primarily by the industrialist Alfred Escher and the Schweizerische Kreditanstalt in Zurich , which he founded. The opening of the Gotthard tunnel promoted the industrialization of Ticino and also made the part of the country an important traffic hub between northern and southern Europe, but expectations of a rapid economic upswing, which was often evoked at the start of construction, were mostly disappointed in the years that followed. 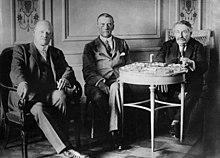 Italian Switzerland as an international platform for dialogue: the Locarno treaties of 1925 (from left to right: Gustav Stresemann , Neville Chamberlain and Aristide Briand )

In 1925, the city of Locarno temporarily became the center of European diplomacy during the Locarno Treaties . The treaty, which negotiated Germany's admission to the League of Nations in Geneva , was about breaking the isolation of Germany after the First World War and normalizing relations with the young republic in the European structure. The decision of the venue was therefore firstly in favor of neutral Switzerland, and secondly, due to its proximity to Italy and because Germany, as a non-member of the League of Nations, did not want to negotiate in Geneva, the city in Ticino. The street of the "Palazzo del Pretorio", the venue of the conference, was changed to the name "Via della Pace" ("Friedensstrasse") after the conference.

When the Ticino Federal Councilor Giuseppe Motta died in the middle of the Second World War , they again wanted to elect an Italian-speaking Federal Councilor as his successor in order to meet the irredentist claims of fascist Italy . The electoral body, the United Federal Assembly , finally found a candidate in the Ticino State Councilor Enrico Celio , who was previously completely unknown in Swiss federal politics .

In terms of economic history, Italian Switzerland developed primarily due to the steadily growing importance of the banking center in Lugano, which in the second half of the 20th century advanced to the third largest in the country after Zurich and Geneva due to high capital influences from Italy . In 1938 a regional airport was established in Lugano , which in 2016 had a passenger number of 176,000.

Lake promenade in Lugano, the largest city in Italian-speaking Switzerland

The city of Lugano in southern Ticino is historically the cultural and economic center of Italian-speaking Switzerland. As the largest Italian-speaking city outside Italy, it also has a certain international significance. Since the 21st century, around 40 percent of the total population of Ticino have lived in the city's agglomeration. Thanks to numerous community amalgamations since the beginning of the 21st century, the city is now the ninth largest city in Switzerland after St. Gallen . Since 1996, the city, together with Mendrisio, has been the seat of the University of Italian Switzerland and numerous cantonal museums. Due to its geographical proximity to Milan, Lugano is also the Swiss city that is closest to a large European metropolis and forms a common metropolitan area with it.

The Ticino canton capital Bellinzona historically forms the center of the northern part of the canton. After long conflicts and disputes, it was definitely determined as the canton's capital in 1878, which makes the municipality an important administrative center for the region. At the beginning of the 19th century the city became one of the most important transport hubs in Switzerland, but the social and economic face of the city did not change until the Gotthard Railway opened in the middle of the century.

The city of Locarno, located on Lake Maggiore , is distinguished on a national level primarily by its cultural institutions. The third largest city in the region developed in the 19th century primarily as an internationally popular tourist platform. The international film festival on the “Piazza Grande”, initiated in 1946, is generally considered to be the most important organ of its kind in the country (since 2017 it has also featured on the back of the 20 franc note from Switzerland).

The town of Mendrisio, located in the southern part of the canton of Ticino, represents an important cultural bridge between Switzerland and Northern Italy. The community developed particularly strongly in the second half of the 19th century, when magnificent villas and buildings on the main traffic route southwards of the local service sector. In addition to Lugano, the city has been the university location of the local university (Faculty of Architecture) since 1996.