The National Council (abbreviated NR ; French Conseil national , CN ; Italian Consiglio nazionale ; Rhaeto-Romanic Cussegl naziunal ? / I ) is the large chamber of the parliament of the Swiss Confederation with 200 members. It is chaired by Isabelle Moret ( FDP ).

The Council of States (small chamber) represents the cantons with 46 members.

Both chambers of parliament together form the Federal Assembly with its headquarters in Bern Federal Palace .

With 200 members, the National Council forms the largest chamber of the parliamentary system.

When the federal state was founded in 1848, this number was not yet fixed, but was based on the population of the individual cantons. According to the requirements of the Federal Constitution at the time, a member of the National Council should represent 20,000 residents. Therefore, the first National Council, which met in 1848, had 111 members.

In 1963 the number of members of the National Council was finally set at 200. Since then, the allocation to the individual cantons has been based on the respective census results (including foreigners) using the Hare-Niemeyer method . A change in the distribution took place in 2003 following the results of the federal census from 2000. Even after that, changes in the allocation of seats were made from time to time. Each canton is entitled to at least one national councilor. A detailed table on the development of the number of seats per canton can be found below .

The national councils are elected by the people every four years for a legislative period of four years; the last election took place on Sunday, October 20, 2019.

Elections have been made since 1919 after a corresponding popular initiative has been adopted by proportional representation , with each canton forming an electoral district. Each constituency forms a self-contained electoral area. There is no threshold clause, such as the so-called five percent hurdle that is common in Germany, for example , because in Switzerland the clearest possible parliamentary group strengths are not elementary in favor of forming governments. Since 1971 women can vote and be elected in national elections. Election day is every four years on the penultimate Sunday in October.

Since the modernization of the census and the use of administrative data to collect population figures (2007), the distribution of the number of seats across the cantons has been based on the permanent resident population (including those not entitled to vote) in the year following the last general election. The principle applies that every canton is entitled to at least one seat. The seats within the cantons with the right to more than one seat are allocated to Hare-Niemeyer . Cantons that can only send one representative to the National Council vote by majority vote , with the relative majority deciding.

It is possible to list one or more candidates twice. In addition, each party can run with several lists per canton (for example, men and women, youth and senior citizens, in larger cantons also city and country lists). A list connection between several different parties is also possible. The voters have the option of submitting the lists unchanged or of changing them by cumulating or variegating them. On the one hand, the voter can vote for a single candidate and leave the rest to his party. On the other hand, it is possible that the voter distributes the votes due to him to candidates from several parties.

Work of the National Council

The antechamber of the National Council hall

National Council Chamber during a session

The work and competencies of the National Council are regulated by the Federal Act on the Federal Assembly (Parliament Act) and the fifth title of the Federal Constitution of the Swiss Confederation . The National Council and the Council of States form the Federal Assembly and exercise supreme power in Switzerland, subject to the rights of the people and the cantons. Both chambers are called councils. The National Council and the Council of States do not meet constantly, but meet regularly for sessions. As a rule, there are four sessions of three weeks each, with two to five meeting days per week. The spring session begins on the first Monday in March, the summer session on the first Monday in June, the autumn session after the Federal Prayer Day and the winter session on the last Monday in November. During the sessions the legislative proposals are debated; if the sessions are insufficient, a council can convene a special session for itself. In the case of special events (political crises, wars, etc.), a quarter of the members of a council or the Federal Council can request that an extraordinary session be called; both councils then meet at the same time. So far, the councils have met eight times for extraordinary sessions, which were usually requested by the social democratic group.

In 1995, after a long phase of party political stability, polarization began in the Swiss party system. Above all, it brought the SVP more votes. At the same time, various parties disappeared at the national level with the Freedom Party or the Landesring. Since the parties at the poles were strengthened, one often speaks of polarization or bipolarization.

See also : Proportion of women in the National Council from 1971 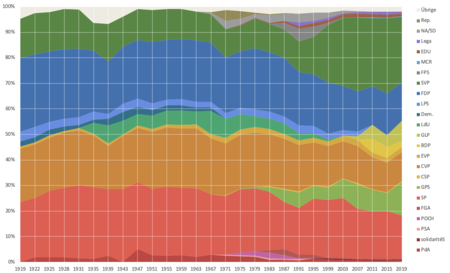 Development of the number of seats
The table below shows how many seats the cantons have been entitled to over the years. Up to and including 2011, the results of the censuses , which take place every ten years, were decisive; from 2015 the population registers will be used for distribution.

Population represented by a seat Based on
the distribution key according to permanent resident population, a National Council represents an average of 0.5% of the resident population in Switzerland. In 2012, the decisive year for the 2015 elections, this value was 40,195 (permanent resident population 8,039,060 as of December 31, 2012). Due to the discreet distribution among cantons and the clause that each canton is entitled to at least one seat, this number varies from canton to canton, between 15,717 (Appenzell Innerrhoden) and 53,438 (Appenzell Ausserrhoden). With the exception of the extreme values ​​in Appenzell, the population represented per seat is between 35,471 and 43,638 inhabitants, i.e. H. from −11.8% below to + 8.6% above average. The number of persons entitled to vote per National Council seat (with 5,124,034 people in the 2011 election, an average of 25,620) in the 2011 elections (with the exception of Appenzell) was between 21,830 (Geneva with an above-average proportion of foreigners) and 27 ' 459 (Bern) people, or –14.8% to + 7.2% deviation from the average.

From a constitutional point of view, the two chambers of the National Council and the Council of States have completely equal rights - a decision is only valid if it is passed in the same version by both chambers. All matters are dealt with in turn by both councils. The council chairpersons jointly determine which council deals with a business first («first council»).

If the National Council and the Council of States cannot agree on a common text after the first discussion, a difference adjustment procedure takes place, whereby the business shuttles back and forth between the two councils. After three unsuccessful rounds, the unification conference must come on the scene. Further explanations on this procedure: Legislative procedure (Switzerland) .

A member of the National Council receives an annual income of CHF 26,000 plus daily allowances of CHF 440 per meeting day. The reimbursement of expenses amounts to CHF 33,000 per year plus meal allowances of CHF 115 per day and accommodation allowances of CHF 180 per day. There are also various remuneration. For example, each parliamentarian is entitled to a general ticket of the first class of the Swiss Federal Railways (SBB), or the value thereof as lump-sum compensation for traveling locally. If you arrive by car, the parking fee will be reimbursed. Damage to these vehicles that occurs while driving to Bern and back to the place of residence is also paid for by the federal government.

→ Main article : List of members of the Swiss National Council

Workplaces for recording speeches in the National Council and Council of States; Due to the renovation of the Bundeshaus, the workplaces were relocated from the Parliament building to the East Bundeshaus.

Cover of a printed copy of the bulletin

The verbatim minutes of the National Council are published in the Official Bulletin of the Federal Assembly. From 1891, plenary debates on decrees capable of referendums were written down on paper and published as "Official stenographic bulletin". From 1960 onwards, council negotiations were taped and stenographers were replaced by editors. In 1963 the verbatim protocols were renamed "Official Bulletin". From the 1990s, electronic aids were increasingly used. The protocols have been published on the Internet since 1995 and on CD-ROM since 1997.

The National Council Chamber serves not only for the Assembly of the National Council but also for the Assembly of the United Federal Assembly . The Council of States take their places, which are under their cantonal coats of arms on the back wall of the hall. In addition to the parliamentary sessions, the annual meetings of the Federal Youth Session have also taken place in the National Council Chamber since 1991 . The administrative delegation is responsible for the use of the parliament building, which can be made available for events “of national or international importance”. Organizations with a parliamentary character can be allowed to hold an extraordinary meeting in a council chamber of the Federal Palace. Non-political organizations must not be given a “prestigious” platform. In 2019, a panel discussion on social issues took place in the hall as part of Women's Day.

During the anniversary session in 1991, the play Hercules and the Stable of Augiah by Friedrich Dürrenmatt was performed in the National Council Chamber.