Uri is a redirect to this article. Further meanings are listed under Uri (disambiguation) .

Uri ( abbreviation UR ; Urnerdeutsch [ (fo) ˈʉːɾi ], French , Italian and Rhaeto-Romanic Uri ? / I , Middle Latin Uronia / Urania ) is a canton in German-speaking Switzerland and belongs to the greater region of Central Switzerland ( Central Switzerland). The main town and at the same time the most populous place is Altdorf .

The canton of Uri is located in central Switzerland between Lake Lucerne in the north and the Gotthard Pass in the south. Uri is one of the three original cantons (founding members) of the Swiss Confederation . The other two are Schwyz and Unterwalden . Due to the topography with a proportion of mountainous, unproductive areas of around 56 percent, three quarters of the inhabitants live in the lowest part of the canton, in the Reuss plain .

In 2012, 94.1 percent of the population stated German as their main language. Information on French , Italian , Romansh and English was not given.

Both regional churches are corporations under cantonal public law.

The cantonal constitution dates from 1984 (with changes).

The legislative body ( legislature ) is the Urner District Administrator . It has 64 members. The term of office is four years. The constituencies form the twenty municipalities. While in those municipalities to which three or more seats are entitled, the election is based on proportional representation, in the smaller municipalities the district administrators are elected according to the majority system. As a rule, the Uri District Administrator is convened for six two-day sessions per year. The meetings are open to the public and take place in the administrative hall of the Uri town hall.

Constitutional and legislative changes are subject to a referendum. 300 eligible voters can take a referendum against district ordinances and thus lead them to the referendum. By means of a popular initiative, 600 eligible voters can also propose the enactment, amendment or repeal of constitutional, legal or ordinance provisions, which are then to be submitted to the referendum. The recall of an authority can also be requested by means of a popular initiative.

See also : List of cantonal referendums in the Canton of Uri
1 Established on December 5, 1998
2 1 independent

Federal Assembly: Like every full canton, Uri sends two members to the Council of States and, due to its number of inhabitants, one representative to the National Council .

Fully withdrawing authority ( executive ) is the seven-member Executive Council , which according to direct popular majority vote for four years is chosen. The chairperson is called Landammann , his or her deputy state governor and is elected for a two-year term.

All judges in the canton of Uri are directly elected by the people.

Since the canton of Uri has to bear high costs for the infrastructure (motorway, Gotthard tunnel, five pass roads, etc.), it is dependent on financial support from other cantons, which partly finance these costs. Uri benefits most from financial equalization .

Economic development in the canton of Uri

The canton does not collect any cantonal gross domestic product , so the assessment is often made indirectly. It is a synthetic indicator based on the following parameters: reported vacancies, new vehicle registrations, imports, exports, overnight stays as well as work in hand and incoming orders in the construction industry. Economic activity in the canton had developed asynchronously to that in Switzerland since around mid-2000.

Since 2006, taxes for legal and natural persons have been reduced in several steps. A " flat rate tax " was introduced. The most important changes to the legal revision can be found in the following table:

From Lake Lucerne to the alpine peaks in the Gotthard region, more gentle tourism has been implemented in Uri. According to the Federal Statistical Office (FSO) in 2006, the canton of Uri had a total of around 100 hotels that generate 220,000 overnight stays (2005) every year. In addition, the canton has a high density of cable cars, around 39 mountain railways lead to the mountains.

The Egyptian investor Samih Sawiris has been developing the large Andermatt Swiss Alps tourist resort near Andermatt since 2011 , which will consist of many hotels, holiday apartments and an 18-hole golf course. Andermatt is easy to reach in the middle between Zurich and Milan , only a few minutes by car from the Göschenen motorway exit. Andermatt is also the home of the Olympic and world champion Bernhard Russi .

Since one of the most important Alpine crossings runs through the canton of Uri, the canton has had a high volume of traffic for centuries, with all its advantages and disadvantages. The Gotthard Pass as the shortest north-south crossing in the Alps has been of great importance to people on both sides of the Alpine arc , especially since the Schöllenen Gorge was expanded from around 1220 and the first Devil's Bridge was built in 1230. The Gotthard railway tunnel was opened in 1882 . The Gotthard road tunnel followed in 1980 . In December 2016, the world's longest railway tunnel, at around 57 kilometers, was put into operation. The tunnel is part of the New Railway Alpine Transversal (NEAT). In 2019, the degree of motorization (passenger cars per 1000 inhabitants) was 554.

School time begins with a two-year kindergarten , one year of which is compulsory. Then you enter the six-year primary school .

The compulsory schooling now amounts to a total of ten years and usually comprises one year of kindergarten, six years of primary school and three years of upper school or the first three years of grammar school .

The canton of Uri has no university or technical colleges .

Borrowing from the Uri district dated December 31, 1879
→ Main article : History of the Canton of Uri

The name of today's canton Uri is in its Latin form since the 8th / 9th. Century attested; the oldest surviving original document, which mentions the pagellum uroniae , comes from the year 853. From the 13th century the form Ure (n) is documented, which soon appears in German-language documents, at the latest since the early 16th century the current one Form Uri . The name, which initially applies to the area around Altdorf , may be derived from the Latin ora / orum ‹Rand› or the Indo-European root outer ‹water, rain, river› with an n -containing suffix , which is probably still in that Affiliation adjective Urner is visible. In both cases, the location on the banks of the Reuss or the Urnersee would be the motif for the naming.

→ Main article : Municipalities of the Canton of Uri 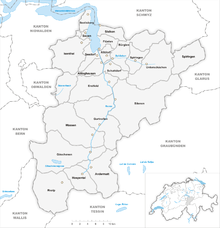 Municipalities of the Canton of Uri

Uri knows resident communities ( political communities ), parishes as well as the corporation citizen communities Uri and Ursern , which are the largest landowners in the canton. The community is responsible for local self-government.

The canton of Uri has no division into districts. However, the Federal Statistical Office (FSO) lists the entire canton as one district under FSO no. : 0400. Since Uri does not know any districts, the two corporations Uri (Seelisberg to Göschenen with 17 communities) and Ursern (Andermatt, Hospental and Realp) are much more important. Practically the entire area (water, soil, Alps, etc.) belongs to the corporations. The areas of the two judicial districts are identical to the areas of the two corporations.