This article is very similar to: Three Sector Hypothesis 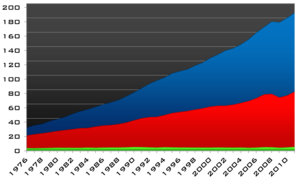 Primary production , industry / trade and services are summarized as economic sectors in economics .

After the three-sector theory of economics , there is in addition to the primary production nor the secondary sector , the intermediate goods of primary production further processed ( industry and manufacturing industry , crafts ) and the tertiary sector , which as a service all services provides that in companies or by the State as well as in other public institutions . Sometimes the division is expanded to include the quaternary sector and quintary sector .

The secondary sector comprises the manufacturing industry of an economy , i. H. the sector responsible for processing raw materials. These include, for example, manufacturing , industry , handicrafts (manual production), the energy industry , energy and water supply , and mostly also the construction industry . The term industrial sector is used as a synonym . The mining is also assigned in part to the secondary sector.

The processing of goods from the primary sector is characteristic of the sector , which makes it material-intensive. Because of the production process using capital goods , it is capital-intensive.

The tertiary or service sector includes all services that are provided in independent companies or by the state and other public institutions.

Due to their economically important activity, certain branches of the tertiary sector are often listed separately. This usually affects the areas of trade, transport and public budgets. This breakdown is particularly useful for service-intensive locations : Cities such as Frankfurt am Main , London or Paris generate around 90% of their gross value added in the service sector.

There are different definitions for the Quaternary sector (also Quaternary sector or information sector ), but mostly the economy is only divided into three sectors. In 1961, Jean Gottmann defined the activities falling into this sector as activities from the area of ​​the tertiary sector that have particularly high intellectual demands and require a pronounced willingness to take responsibility.

This includes in particular:

A further definition for the Quaternary sector is services that are provided in the area of leisure and entertainment and thus it takes the rapidly growing economic sector into account.

Hans Linde understood the Quaternary Sector 1977 to mean services that are not guided by market economy principles, but rather politically regulated ( state services ).

In rare cases, the specialist literature also mentions the quintary sector , which includes the areas of waste management , tourism , leisure activities , wellness and health care . It is a large sector, because the waste management industry already consists of garbage collection, scrap yards, sewage treatment plants and recycling plants, which according to NACE are otherwise assigned to the secondary sector. Tourism, recreational activities, wellness and health care are sometimes also listed as a quintary sector. This group is otherwise assigned to the service sector (tertiary sector).

Selected figures from the Fischer World Almanacs 2008 and 2012.