The term service society is aimed at the social structural change that took place in different ways in all western industrialized countries beginning in the 1970s . In fact, it is a euphemism for the dismantling of infrastructures in the coal and steel industry , rather than a general de-industrialization . All in all , the change is associated with a considerable decline in the number of jobs .

First shifted in the basic materials industry, many production quantities to countries with more favorable extraction methods for coal and ores and mineral oil and natural gas . Then fewer and fewer jobs remained in the manufacturing industry due to automation and increased productivity , and at the same time the demand for industrial products could be satisfied more and more cheaply by transporting new manufacturers to consumers , so that the service sector (in the sense of the three-sector hypothesis of Jean Fourastié ) on the one hand was able to bind more and more workers and on the other hand more and more purchasing power.

The process of transforming an industrial society into a service society is known as tertiaryization .

In addition to the changed material basis, a service society is also associated with a change in social values ​​and norms.

A number of hypotheses attempt to justify the phenomenon of tertiaryization. These include u. a. the outsourcing thesis and the interaction thesis . In fact, the structure of demand in society does not change; rather, as a result of precarization , the proportion of people with low incomes increases and the previous full employment ends.

The increase in productivity in the first two sectors freed up workers and the service sector served as a “catch basin” for the laid-off workers . In addition, as part of outsourcing, companies part with activities that are not part of their core competencies and purchase these services from specialized providers of company-related services . Examples: maintenance , IT, security service .

There is a considerable private, affluent demand for services , possibly reinforced by changes in living conditions (falling working hours leads to demand for leisure activities) and in the population structure.

In addition, with constant demand in the planning and implementation of goods production, there is an increased need for services in the storage and distribution of goods within the manufacturing industry and to consumers. In this context, one speaks of an “industrial service society” in the industrialized countries.

One consequence is the growing complexity of social and economic systems. The general spread of modern information technology and faster communication paths are a prerequisite for the adaptation . The need for mediation and control increases, but the system of regulation and the required capitalization do not meet the same extent. Overall, the development therefore leads to a further increased division of labor. At the same time there is increased bureaucratisation of society. In addition, defaults are increasing due to bankruptcies and fluctuations in demand. The requirements for more flexible methods of operational management and organizational forms are only slowly developing.

If one uses the employment relationships in the respective economic sectors or the share of the sectors in the gross national product (GNP) as a measure, it can be concluded that Germany was an agricultural society until the end of the 19th century and an industrial society until the 1970s . In this reading, the expansive tertiary sector overtook the secondary sector in the 1970s and one can speak of a service society in the Federal Republic of Germany ever since .

If one interprets the classic three-sector theory from the demand side and one considers the consumption of classic personal services (tertiary products) such as B. hairdresser, concert or restaurant / café visits or the use of cleaning or renovation services, one can come to different conclusions. As Jonathan Gershuny has shown for Great Britain and Boris Loheide for Germany, contrary to expectations, this consumption did not increase significantly, at least in the 1970s, 1980s and 1990s. Instead, people increasingly bought secondary-sector products that replace such services or can be provided by oneself, e.g. B. washing machine, home cinema or espresso machines. At the same time, many companies pass on services to consumers by letting them collect their food or coffee themselves from the counter (system catering), draw their money themselves (ATM) or assemble their furniture themselves (IKEA). As a result, we live less in a service society than in a self-service society . 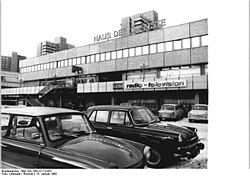 Facilities such as the House of Services in Halle-Neustadt offered housekeeping services, service workshops such as bespoke tailoring , a photo studio and optics .

The GDR had at the time of the Wall case (1989) the same socio-economic structure as the Federal Republic of Germany around 1965. The reasons are for the low productivity and the neglect of the service sector by the socialist economic planning . Too many people were employed in the first two sectors. The use and scope of services is difficult to plan in advance. After reunification , the new federal states quickly developed into a service society.

“Overall labor market”: The professions with the highest employment growth are, for example: office workers, nursing professions and data processing specialists. The demands on employees are increasing, especially in the area of ​​technical and content-related qualifications and social skills (e.g. teamwork and independence).

The layer of "farmers" that had been important for centuries lost more and more of its importance. Today they are a negligible figure in the EU with less than 1 percent of the total workforce. The farmers have substantial assets, but their financial situation is often very tight. With an average weekly working time of 59 hours, the average net household income per capita is even lower than that of a worker.

From the industrial revolution in the 18th century, the “working class” was a dominant class until it was replaced by civil servants and employees in the late 1970s. In the wake of the economic miracle , the numerically shrinking workforce has risen socially. She achieved a higher standard of living and better social security, but her heavy physical strain remained.

Children from working-class families still have poorer educational opportunities and the working class environment remains to itself. People who belong to the working class generally have lower social standing. The risk of becoming unemployed is higher for people from this class of society.

“Employees and officials”: ​​Today the largest group in the middle of society is that of the employees. This social class first appeared at the turn of the 19th and 20th centuries. To date, their share of the workforce has risen to 50 percent.

Their activities can be divided into three classic areas: commercial activities, technical activities and office and administrative activities. Many employees can also be found in the professional fields of transport, communication and information. Most of the employees are in the tertiary sector. Since the tertiaryisation of the secondary sector there has also been an increasing number of employees in industry.

The typical professions in the service society are considered to be resistant to rationalization, since the quality of the work often depends on its quantity.