The gross national income ( GNI ), until 1999 also gross national product ( GNP ) ( English Gross National Income (GNI) or Gross National Product (GNP) ), is a central term from the national accounts (VGR) and an economic indicator that represents the value measures all goods and services that are produced in a billing period with the help of production factors that are owned by residents (all income generated by residents, regardless of whether they are generated domestically or abroad).

This is equivalent to the income from employment and property ownership ( interest and other investment income , but not income from sales transactions ) flowed to residents , which is why gross national income is the central income indicator of an economy .

As a sub-form of national income, the gross national income is the value of the end products and services that are produced in a certain period by production factors that are owned by residents.

It includes (in each case to the proportion in which the goods have been produced in the period under review by factors of production owned by residents):

Hence, Gross National Income (GNI) can be thought of as the total value of current production that residents have made. Thus, it is an important indicator of national accounts ( VGR is). 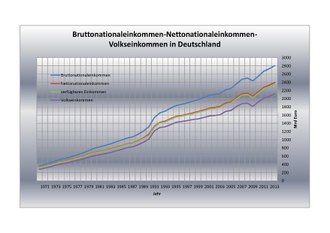 The gross national income at market prices is the sum of the values ​​of the income from work ( compensation of employees ) and capital ( corporate and property income ) drawn by all residents of a country within a certain period (one year ) plus production and import taxes, minus subsidies (taxes on goods minus subsidies on products) and plus depreciation . In connection with other economic indicators, this is as follows:

In 1999, when the ESA was introduced in 1995 , the term “gross national product” (GNP) was replaced by the term “gross national income” in the EU. The only difference in the calculation of the GNI from the GNP is that it takes account of the netted production and import taxes (e.g. customs duties) and subsidies from the EU. If the GNI is derived from the GDP at market prices, the following calculation results:

For other economic areas, ESD and GNP are identical.

The relationship between gross national income and the other national accounts

Differentiation from the gross domestic product

For large economies, gross domestic product and gross national income are almost identical, while for small economies it can differ significantly. The ratio of gross national income to gross domestic product for Germany in 2009 was 1.014 and for the United States 0.998. San Marino, on the other hand, has a ratio of 0.85, and Luxembourg only 0.526.

“Too much and for too long, we seemed to have surrendered personal excellence and community values ​​in the mere accumulation of material things.

Yet the gross national product does not allow for the health of our children, the quality of their education or the joy of their play. It does not include the beauty of our poetry or the strength of our marriages, the intelligence of our public debate or the integrity of our public officials. It measures neither our wit nor our courage, neither our wisdom nor our learning, neither our compassion nor our devotion to our country, it measures everything in short, except that which makes life worthwhile.

And it can tell us everything about America except why we are proud that we are Americans. "

“It seems we have given up too much, for too long, personal improvement and community values ​​in favor of the sheer accumulation of material values.

Our Gross National Income is now over $ 800 billion a year, but that Gross National Income - if we measure the US by that - includes air pollution and cigarette advertising, and ambulances cleaning up the bloodbath of our highways. It includes special locks for our doors and prisons for the people who break them. It takes into account the destruction of the sequoia tree and the loss of our natural wonders through chaotic urban sprawl . It includes napalm , nuclear warheads and armored cars for the police in the fight against rioting in our cities. It includes Whitman's rifle [note: Charles Whitman was a gunman] and Speck's knife [note: Richard Speck was a serial killer]. And the television programs that glorify violence to sell toys to our children.

But gross national income has no place for the health of our children, the quality of their upbringing or their enjoyment of play. It does not include the beauty of our poetry, the strength of our marriages, the intelligence of our public debate, or the integrity of our public officials.

It does not measure our quick-wittedness or our courage, our wisdom or our learning, our compassion or our devotion to our country. In short: it measures everything, except what makes life worth living.

And it can tell us anything about America - except why we are proud to be Americans. "

In order to develop more accurate indicators of actual wealth , the following indicators, among others, were developed:

All of these indicators aggregate a large amount of data that are not included in gross national income (see aggregation (economy) ).

Amartya Sen formed the welfare function as an alternative, for example, to the median of the product of gross national income and the relative equal distribution of this income.

In Germany, from January 2011 to June 2013, the Enquete Commission on Growth, Prosperity, Quality of Life of the Bundestag looked for a possible new measure of prosperity and progress beyond the growth fixation of the previously dominant gross national product.

Andrew Oswald , Professor of Economics at the University of Warwick, believes that ESD as a measure of "prosperity" is out of date. He suggests developing a benchmark to measure the “happiness and emotional well-being of citizens”.