Depreciation ( English depreciation / amortization ) is in accounting the detection and accounting of impairments , the at assets of the investment and working capital occur. The opposite is the ascription .

Section 253, Paragraph 1, Clause 1 of the German Commercial Code( HGB ) standardizes thedepreciation requirement under commercial law . In assets of assets whose useful life is limited in time, which are acquisition or manufacturing costs to reduce depreciation. The depreciation expense ispostedagainst the (residual) book value of the asset. Among the depreciable assets, in particular: buildings , equipment and machinery, fleet , office furniture and equipment such as office furniture or storage and workshop facilities and tools , including the accessories of this property as well as intangible resources including derivative goodwill are subject to wear or age impairment . This reduction in value must betaken into accountin the balance sheet and the income statement so that the annual financial statements give a true and fair view of the assets, financial and earnings position . Depreciation leads to a reduction in the book value of an asset in the balance sheet; In the income statement, they reduce the annual surplus as an expenseor increase the annual deficit.

Section 253 (4) sentence 1 of the German Commercial Code( HGB ) stipulates that the strict lower-of-cost-or-market principle is to be implemented through unscheduled depreciation. In the case of current assets , write-downs are to be made in order to apply them at a lower value resulting from a stock exchange or market price on the reporting date. In the case of fixed assets, there is a right to depreciate ; Unless these are permanently impaired, an unscheduled write-down to the lower stock exchange or market price can be omitted (moderate lower value principle). Unlike scheduled depreciation, unscheduled depreciation is reversible and subject to reversal. According to Section 253 (5) sentence 1 of the German Commercial Code (HGB), the book value reduced by the unscheduled depreciation may not be retained if the reasons for this no longer apply; A write-up affecting net incomemust be madeon the reduced book value(write-up requirement). There is an express prohibition of write-ups for impaired goodwill.

Depreciation in the balance sheet theories

When defining depreciation, the author's scientific location also plays an important role. For the static balance sheet theory , the main focus of the balance sheet is the determination of assets and debts . Accordingly, depreciation has the task of recording usage-related impairments. One of its founders, Heinrich Nicklisch , described depreciation in 1922 as “generally an amount by which the value of the assets is reduced by some method”. In the dynamic balance sheet approach of Eugen Schmalenbach , however, the profit and loss account is in the foreground, so that the acquisition or production costs of assets are distributed in the form of depreciation over the period of their expected operational use. Erich Gutenberg took this dynamic view; For him, depreciation represents "a method of determining and distributing the expenditure on assets, the use of which extends over several business periods".

While every decrease in value is referred to as depreciation under commercial law , tax law distinguishes between the following variants:

The causes of the loss of value can be of a general or specific nature. Come into question

The cause of unscheduled depreciation are stock exchange or market prices on the balance sheet date that are below the book value of the asset.

The following arithmetic variables must be included in determining the depreciation:

The depreciation is first made at the time of operational readiness (and not at the beginning of actual use). In the case of a purchase, this is usually the day of purchase or delivery. This is calculated to the exact month ( pro rata temporis ). For example, if the acquisition is made on a date between May 1 and May 31, eight months - provided that the fiscal year corresponds to the calendar year - must be written off.

Depreciation must be carried out until the asset leaves the company through sale, loss or scrapping. Scheduled depreciation usually means that the asset is reduced to a book value of 0 monetary units (MU) in the last year of use  . If the asset continues to be used in the company after it has been fully written off, a reminder value of 1.00 GE can be continued in the books.

In commercial law, a distinction is generally made between direct and indirect, paid and imputed, and between scheduled and unscheduled depreciation .

The depreciation amount per year does not always have to be the same. Various types of depreciation can arise due to various reasons for the loss of value:

The following types derived from this are generally permitted under commercial law, but they must comply with the GoB and must not contradict the actual wear and tear and depreciation of the asset.

It can be seen from this that all depreciation methods are permitted under commercial law (optional method).

The acquisition or production costs of the asset to be depreciated (WG) are divided equally over the years of the useful life . The same amount is written off every year and the flat share is completely written off at the end of its useful life. The depreciation value is calculated using the following formula:

In general, the value of an asset with acquisition cost c and useful life n after x years is:

A machine is purchased for 21,000.00 euros (net, without VAT ). With a normal useful life of seven years and the use of straight-line depreciation, 1/7 of the acquisition costs per year, i.e. 3,000.00 euros, must be calculated as an expense for seven years.

The deduction for wear and tear is measured in decreasing annual amounts with a constant multiplication factor.

A machine is purchased for 21,000.00 monetary units (MU) (net, without VAT ). Using declining balance depreciation, 20% of the reported value per year can be deducted as an expense for about seven years.

To ensure that the asset is fully depreciated at the end of its useful life, it is permitted in some countries to switch from geometric-degressive depreciation to straight-line depreciation. In the year of the change, the residual book value is divided by the number of remaining years of depreciation, so that from the change there are constant, i.e. linear, depreciation amounts that are all greater than those that would have resulted from continued declining balance depreciation. Under the condition

it follows that the optimal time for menopause is out

In the year of the change, the residual book value is divided by the number of remaining years of depreciation, so that from the change there are constant, i.e. linear, depreciation amounts that are all greater than those that would have resulted from continued declining balance depreciation. In the example of the geometric degressive depreciation , a change in the 4th year would be advisable. The remaining book value of 10,752.00 MU at the end of the 3rd year (= after the 3rd straight-line depreciation) would result in a depreciation of 2,688.00 MU per year over the remaining useful life of 4 years. With the degressive method, on the other hand, only 2,150.40 MU would be written off in the 4th year.

According to the digital depreciation, the value of an asset, with the acquisition costs and the useful life , after years:

In contrast to declining balance depreciation, progressive depreciation makes increasing annual depreciation as the useful life increases. The economic justification for this type of depreciation is a higher loss of value at the end of the useful life. Coal mines or similar plants are an example, because the longer they are used, the mining of the material becomes more and more complicated, technically demanding and therefore more expensive. It is also appropriate for fixed assets that only slowly reach their full use over time ( orchards , wineries ). The progression amount is the quotient of acquisition costs and the sum of the planned years of use (for example, with three years of use: 1 + 2 + 3 = 6). This means that the asset is completely written off at the end of its useful life.

In general, the value of an asset, with acquisition costs and useful life , after years:

The amount to be written off annually is determined by the specific use of the asset in the respective year. In order for it to be fully written off in a specified time, an anticipated total performance must be assumed.

Which method is the best?

Abolition of the reversal rule

You are subject to the risk of being exposed to underutilized capacities with fluctuations in the level of employment, resulting in idle costs . In particular, fixed costs such as depreciation and interest expenses are wholly or partially no longer generated by the sales process in the event of underemployment and can lead to losses (so-called operating leverage ). These fixed costs constantly force the company to fully utilize its capacity so that the fixed costs of fixed assets are distributed over the largest possible number of products and therefore kept as low as possible for each product ( unit costs ) ( fixed cost degression ).

The intensity of depreciation increases when particularly valuable equipment with a long useful life is required and a lengthy production process ensures a slow throughput of the material and vice versa. High depreciation intensity and at the same time low personnel intensity can indicate a high degree of rationalization .

The tax depreciation for residential property ("residential purposes") is regulated in Section 7, Paragraphs 4 and 5 of the Income Tax Act. The amount of the depreciation rates is made dependent on the completion , submission of the building application or the conclusion of a property purchase agreement.

Further variants in Section 7 (5) No. 3b and c EStG relate to later periods in which a building application or purchase was made. 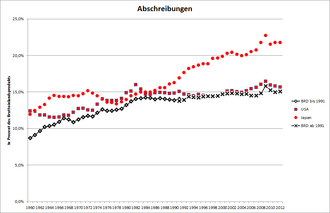 In the national accounts , depreciation is defined as a measure of the depreciation of fixed assets during a period (year) due to normal wear and tear, economic behavior (see moral wear and tear ) and including the risk of losses due to insurable claims.

In the figure on the right , gross national income (GNI) has been set at 100% since 1960. The economic depreciation is the top (purple) size. The trend towards an increasing share of depreciation in GNI is remarkable, which makes distribution conflicts more difficult.