The following important information is missing from this article or section:
Duration of mining, regulations, environment, recultivation, etc.
Help Wikipedia by researching and pasting it .

Rhyolite quarry in Löbejün in Saxony-Anhalt

A quarry is used for extraction of solid rock from a rock - deposit . In the case of loose rock , on the other hand, one speaks of sand or gravel pit .

Rock mining can be done in depth and width or on a mountain in the horizontal direction. The majority are above ground referred -Steinbrüche, also known as open quarries. In special cases, the rock is extracted in underground quarries.

Most quarries are used to mine bulk materials and bulk raw materials for industry. Quarries for ashlar stones (path surfaces, interior decoration, facades, tombstones, garden design, etc.) only come far after that .

The Egyptians mainly quarried soft rock, such as limestone and sandstone, in quarries that were located in the immediate vicinity of the structures. Limestone was for all great pyramids of the Old Kingdom as the Cheops pyramid , the Pyramid of Chephren and Menkaure in Giza used. Quarries for hard rock were at Mons Claudianus and Mons Porphyrites in Egypt . A notable example of an ancient Egyptian quarry operation is the Aswan Unfinished Obelisk . The great rock temple of Ramses II in Abu Simbel was carved out of sandstone.

In ancient times, the Greeks mainly broke off marbles and rarely sandstone or limestone. For example, they built the Acropolis with Penteline marble , whose quarry was not far from Athens. But they also transported large individual items such as the kouroi on ships.

The Romans mainly quarried soft rock , such as the Roman travertine from Tivoli and volcanic tuffs from the Orvieto area ; until the 2nd century they mainly obtained marble from the Greek island of Paros and only later used Carrara marble for more valuable work . But they also began to quarry marble and limestone for the purpose of lime production ( lime burning ).

Quarries in the German area were only operated on a larger scale since Roman times . Important Roman quarries were the Felsenmeer in the Odenwald and the Kriemhildenstuhl in the Palatinate . It was not until the Romanesque period that a quarry began to operate in Germany for the construction of church buildings from sandstone and limestone on a larger scale.

In Austria, the Roman quarry St. Margarethen is one of the oldest quarries that was already in operation when Carnuntum was built. 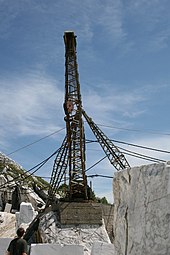 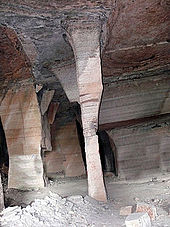 In the case of a deposit approved for mining, the process chain initially consists of removing any overburden that may be present , followed by extraction, usually by blasting . Subsequently, the usable rock is transported to the processing plant, in which the feed means of crusher or mill crushed and sieves or optionally classifier classified is. A modern quarry is a capital-intensive and largely automated operation. The final products are exceptions materials that are classified according to their grain size: crushed sand , gravel , crushed stone , ballast and water components . Multiple broken chippings are referred to as high-grade chippings, which are used in particular in qualified asphalt road construction, but also in concrete production.

A special form of quarry are companies for the extraction of natural stones shaped in line with the market, such as B. slabs or paving stones. In this type of quarry, the most popular rocks are marble , limestone , granite , basalt and slate . Ideally, these are deposits whose rock layers are already structured according to the desired shape. Otherwise, the desired shapes must be made by sawing or splitting .

Natural stone used in Germany increasingly no longer come from local or regional quarries, also because local extraction costs far exceed those of z. B. in Asia. The operation of a quarry is subject to very extensive official approval procedures and far-reaching requirements. The reclamation after completion of the stone quarrying is regulated in detail. In Indian and Chinese quarries, for example, costs are kept low by different working conditions, safety precautions, generally inhumane forms of accommodation and child labor .

The type of rock mined is very diverse. They are primarily differentiated according to their geological origin. Examples are limestone , dolomite , granite , basalt or greywacke . The main quality-determining factors are strength and wear behavior . These criteria are also essential for the end product to be marketed. In addition, there are criteria that result from the processing technology of the processing, these are above all the purity of the sorted fractions and the cubicity of the grain shape .

The salable materials produced in a quarry are predominantly bulk goods with a relatively low tonnage value. When it comes to marketing, therefore, transport costs are often very competitive; they largely define the regional marketing boundaries to competition.

Truck transport is predominant, and rail transport is also widespread in Switzerland. If there is a siding at the quarry, the radius of the marketing area can be extended for rail transport, as the costs for the route are lower. However, with rail transport there are often costs for reloading to trucks shortly before the construction site where the ballast is used. Track construction is an exception, as the ballast can be transported directly to the construction site by rail without being handled. According to an ARD documentation, z. Currently (as of May 2016) Rail connections at quarries have been severely dismantled by Deutsche Bahn.

Significantly larger delivery radii can only be realized economically with the appropriate conditions by shipping.

Dust is diffusely emitted from quarries, especially during operation . Driving on unpaved roads on the quarry also raises dust. However, what is decisive for the emissions situation is the drop from the conveyor belts . Dust-reducing measures include the use of dust-binding machines , automatic adjustments to the discharge heights of the conveyor belts and the encapsulation of selected units.

In 2004, 144 million tons of natural stone were mined in Germany. The highest level was in 1994 with 189 million t (source: Stat. Federal Office). According to the association, the number of quarries in Germany is around 2000, employing around 25,000 people. Quarries in particular, in which rocks can be extracted for use as natural stone , have been reporting declining operating figures for years, since rocks from India and China in particular are imported as bulk goods and cheap products.