The title of this article is ambiguous. For other meanings, see Sieve (disambiguation) . 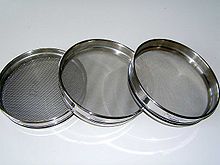 The sieve (from Middle High German / Old High German sip / sib , as Strain dating back to Indo seip- * "pour, strain " or as a sieve to the Germanic root sib , "seven", in relation to the drying of the West Germans) is a tool for separating or separating solid materials ( bulk goods ) according to grain size. As a result, at least two fractions are obtained, which differ significantly from one another in terms of their minimum and maximum grain sizes. In mechanical process engineering that counts seven of the classification process .

The feed material is mostly a solid mixture of different grain sizes (e.g. bulk material , heap ), but it can also be a solid mixture together with liquid. The separation takes place through the sieve bottom or sieve lining , a finer or coarser mesh , wire mesh, perforated plate or the like , depending on requirements . Braided screens made of z. B. wicker or horsehair have been known for a very long time, they were mainly used to select and clean grain , flour and the like.

Certain sieves with large openings that are used in the coarse grain area are also referred to as grates or, in some cases, as rakes.

In a figurative sense, the term sieve also describes logical processes that work with comparison operators, such as B. in mathematics the sieve of Eratosthenes for the determination of prime numbers .

In electrical engineering , sieving is the reduction of the alternating voltage component of a pulsating direct voltage . Here, low-pass filters are used, which in the simplest case consist of a capacitor . The term is often used for power supplies .

In a figurative sense, but with a derogatory meaning, one speaks of sieve processes when groups of people (e.g. schoolchildren, students, athletes, applicants) are classified in a selection process according to performance criteria .

The sieve lining or sieve bottom as the actual separating medium contains a large number of openings of the same size. It consists either of metal ( perforated sheet metal , wire mesh , metal mesh or metal rods), plastic, rubber of various hardnesses or silk gauze. The size of the openings is called the mesh size and defines the screen section . In most countries the opening is defined in "mm" or "µm", in the USA however in "mesh" (number of meshes per inch , sometimes also number of openings per square inch ). The larger grain stays at the top (sieve overflow), the smaller grain falls down (sieve passage). A grain of roughly the same size is called a border grain. A sieve can consist of one or more sieve linings lying one above the other, whereby the sieve with the largest mesh size is on top of the sieve stack. The cleanliness of the screen lining is of great importance for the efficiency of a screen. In particular, the clogging of the sieve openings by boundary grain must be carried out by suitable measures (e.g. brushes, balls, chains, rubber cubes that “run” on or under the sieve or by increasing the diameter of the holes downwards, as in, for example, conical or double cylindrical holes) can be avoided.

In large-scale applications, screen linings are driven to make certain movements to improve the screening performance (screening machine). The movement of the screen lining serves to transport the feed material further in the longitudinal direction of the screen, to eject the boundary grain from the mesh openings and to ensure the sustainability of the separation ( screen efficiency ).

In power plants , sieves are used to remove sponge rubber balls that are inserted into the cooling water flow of a condenser for pipe cleaning . The sieves required for this can have a nominal width of over 3000 millimeters within the pipeline and are considered fittings . They have no mesh, but longitudinal bars with a gap of five to ten millimeters. The sieve surfaces are movably mounted so that they can be rinsed from the back by turning them if they are dirty.

In the manufacture of paper , fibers are skimmed off from the pulp.

Sieves are used in laboratories to determine particle size distributions according to criteria that are as objective as possible. Such test or test sieves are in DIN set 3310 to 3310-3.

A sieve analysis is used to determine the distribution of grain sizes in a solid mixture. The result is shown graphically in a grading curve.

Sieving machine in a processing plant in a quarry

Sieving machines are used to process bulk materials such as sand , gravel , coal , crushed stone , powders, color pigments , recycling materials , etc. They are predominantly excited by an oscillating movement , a distinction is made between the following types:

Drum screening machines and moving grids (e.g. roller grates) work according to different movement principles. A sensible technical design of a screening machine can only be made with detailed knowledge of the given conditions and the desired goals. Basically, the throughput increases with the width of the sieve and the quality of separation improves with the length of the sieve. The sieving performance is generally worsened with a high proportion of sieve passage, with a relatively low separating grain size, with higher moisture content of the feed material or with fibrous materials.

Sieving machines in the food sector

In a mill , with the help of stacks of sieves with different mesh sizes (from 125–1000 µ), the grain parts resulting from the grinding of grain are separated into intermediate ( meal ) and end products ( flour , semolina , haze and bran ). The machine used for this is called a sifter , usually a plansifter . The term plansifter is also used in the sugar industry, although it is actually a screening machine.

Both corrosion-free metals and plastics are used as materials. A distinction is made between the curved kitchen sieve ( Passoire ) and the pointed sieve ( Chinois ). Screens with very coarse perforation, which also often have handles and a stand or a floor plan are as a colander, strainer or with the old concept Strain referred; They are used to pour off the cooking water from pasta, potatoes, vegetables and the like. used. The strainer and hair strainer, which are mainly used for straining , are particularly fine-meshed sieves . Very small strainers are called tea strainers. A special, flat screen shape for the straining of cocktails , the bar sieve ( strainer ). Single-handed sieves are mechanical sieves for flour or powdered sugar .

The principle of the sieve is also used by some special kitchen appliances. The spice sachets or the spice ball, the tea infuser , the press ram jug ( cafetière ) and the sieve shaker (for powdered sugar or cocoa powder) should be mentioned here.

Related kitchen utensils are the straining cloth , the press sack and the filter bag , in a broader sense also various straining devices (" Flotte Lotte ", potato press ) as well as the spaetzle press and spaetzle slicer or the garlic press .

A flat Lay- splatter guard keeps liquid drops (fat splashes) back in the pan, but allows water vapor and oxygen from the air to pass.