The title of this article is ambiguous. Further meanings are listed under fitting (definition of terms ) .

A valve ( Latin armare "equip") in sanitary engineering and plant engineering designates a component for changing and controlling material flows , which is used in particular on pipelines and containers ( boilers ) for gases and liquids.

A mixing valve usually has three or four inputs and outputs (three or four-way valve) and is used for the controlled mixing of material flows. 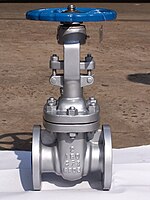 Gate valve in the heating circuit

Valves cause a cross-section reduction or the closure of a pipeline by a closure body moving axially towards a correspondingly shaped sealing seat. This movement is either controlled externally or it happens automatically, as is the case with a check valve , which prevents flow when the direction of flow is reversed.

In the domestic sector, poppet valves have traditionally been used as outlet valves , in which the flow opening is closed by a flat or conical valve disk. Modern single-lever mixers regulate the flow through sliding ceramic discs.

Butterfly valves control the flow through flaps that are rotatably mounted on an axis lying in the flap plane.

Ball valves have a pierced ball instead of a cylinder or cone.

The manually operated shut-off and control valves include:

Fittings under a spherical gas container

In contrast, non-return valves , check valves , backflow preventer , ball valves and KFR valves automatically operate and allow the medium to pass in one direction only.

In a broader sense, other internals in pipelines are also referred to as fittings. For example:

Each valve has its area of ​​application according to the prevailing pressure and temperature in the pipeline , the size of the pipeline, the tightness requirements of the valve, the throttling and the direction of the fluid flow as well as the medium itself.

Safety fittings according to DIN EN 806-1 or DIN 3211 are control devices to prevent dangerous physical operating conditions such as excessively high pressures or temperatures:

A safety fitting in accordance with DIN EN 806-1 protects the quality of the drinking water by preventing process water from flowing back into the pipe network. They include non-return valve , pipe separator , vacuum breaker , backflow preventer and pipe ventilator .

An initial shut-off is a valve that enables the separation of a branching pipe line in a pipeline network. The main shut-off device (HAE) of the house connection is located near the house entry for the supply lines .

Line regulating valves help with the hydraulic balancing of pipe systems with several lines, all of which are to be supplied with a defined volume flow. In order to generate the lowest possible pressure drop, (shut-off) valves , piston valves , (shut-off) flaps and angle seat valves are ideal for this task . Ball and plug valves would be suitable, but do not allow precise regulation of the volume flow.

Differential pressure relief valves protect uncontrolled pumps and boilers from insufficient flow by opening a bypass line if the pressure in the main pipe increases too much.

Can fittings manually by hand , as with domestic tap , through the use of air pressure ( pneumatic ), or fluid pressure ( hydraulic ) and electrically via magnets or motors are operated. In the case of check valves , the fluid flow in the pipeline causes the valve to close automatically.

The valve body is often designed as a cast construction and made of gunmetal , as this material is easy to process and largely corrosion-resistant, does not promote bacterial growth and does not become brittle at low temperatures. Gunmetal is similar in its alloy composition to bronze .

Simple valve bodies can be manufactured as a machining construction and are often made of brass . Brass is stronger than gunmetal, but less resistant.

In the home, fittings made of brass or gunmetal are often chrome-plated or nickel-plated.

Larger fittings for industrial use are also made of cast steel and are protected against corrosion with a coating of epoxy resin or enamel .

Valves made of stainless steel and plastics (e.g. hard PVC ) are also used with corrosive media .

The nominal size is marked with the abbreviation "DN". In the case of fittings with an imperial thread connection , the imperial dimensions that were customary in the past are also given.

The flow  resistance of the valve cannot necessarily be deduced from the nominal size . Fittings of the same size that look similar can also have free cross-sections that differ greatly from one another. The exact values ​​can only be found in the manufacturer's documentation. With taps and gate valves, the free cross-section can often be assessed and measured in the open position. Due to the diversion of the material flow, this is not possible with valves.