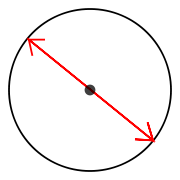 The length of the red line is called the diameter

Half of a diameter is called a radius . The ratio of the circumference of a circle to the diameter is the number of circles and therefore applies to a circle

Inside and outside diameter 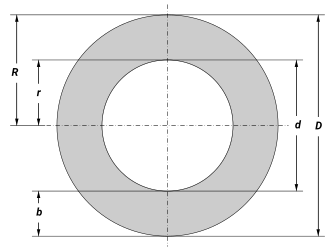 Different symbols are usually used to differentiate, e.g. B. , or for the inner and , or for the outer diameter.

The inner and outer radius are referred to analogously . The difference between the outer and inner radius is called the ring width for circular rings and the wall thickness for hollow bodies .

A mathematical generalization is the diameter of a set in a metric space . It is defined as the supremum of all distances between two points in space,

For circles and spheres in Euclidean spaces , this definition agrees with the geometrical term mentioned above.

Technical formulas are preferably structured in such a way that the diameter and not the radius is included as a variable, since the diameter can be determined directly with the measuring equipment customary in the workshop (e.g. caliper ) and then used in the formula.

In technical drawings and texts, the diameter symbol ⌀ (U + 2300) is placed in front of the dimensions of circular shapes. In the past, this symbol was only used when the circular shape was not immediately recognizable, i.e. H. for example in the sectional representation of holes or through holes . According to DIN 406-11 from 1992, the diameter symbol must always be put in front since then.

Examples of hollow bodies with inner and outer diameters are washers , hoses , tubes , hollow shafts and roller bearings . In the case of pipes and hoses, the standardized inside diameter is called the nominal width . The term nominal diameter is used for inside or outside diameter depending on the industry.

Various measuring methods are suitable for measuring and testing diameters, depending on the size . Both inside and outside diameters can be measured with micrometers and calipers .

Larger diameters can also be measured using coordinate measuring machines. Optical measuring methods such as laser micrometers are suitable for small diameters in the micrometer range .

Limit gauges can be used to check the diameters of a workpiece .