The volume and the surface are calculated using the so-called Guldin's rules (named after the mathematician and astronomer Paul Guldin ). Already in ancient times these were known as barycentric rules or centrobaric rules and were described by the Greek mathematician Pappos of Alexandria .

Representation of the rotation of a sine curve

Calculation of the volume of a solid of revolution

If the generating curve intersects the axis of rotation, it must be considered whether the corresponding partial volumes should be counted as positive or negative contributions to the total volume.

Rotation around the x axis

For a solid of revolution that results from the rotation of the area bounded by the graph of the function in the interval , the -axis and the two straight lines and around the -axis, the formula for calculating the volume is:

Rotation around the y- axis 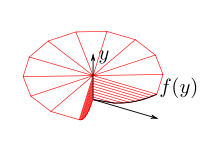 When rotating (around the -axis) the area, which is limited by the graph of the function in the interval , the -axis and the two straight lines and , one has to transform to the inverse function . This exists when is continuous and strictly monotonic . If not (as e.g. in the picture above right), it can perhaps be broken down into sections, each of which is continuous and strictly monotonic. The volumes belonging to these sections must then be calculated and added separately.

If you substitute here , you get the volume around the axis

The absolute value of and the min / max functions in the integral limits ensure a positive integral.

For rotation (around the -axis) of the area, which is limited by the graph of the function in the interval , the -axis and the two straight lines and , the formula applies:

The two Guldinian rules, named after the Swiss mathematician Paul Guldin , enormously shorten the surface and volume calculations of bodies of revolution , if the center of gravity of the lines or areas of the rotating objects can be easily identified using the symmetries of the respective task (see examples below).

= Area of ​​the generating area

= Radius of the center of gravity circle

When rotating around the x axis

what the above result represents if the interval limits are still used.

When rotating around the y- axis

As with the volume calculation above, the calculation for the continuous and strictly monotonous sections of in which the inverse function exists must also be carried out separately.

Example: Surface of a rotational torus :

The volume of a solid of revolution is equal to the product of the area of ​​the generating surface and the circumference of the circle, which is generated by the rotation of the center of gravity of this surface:

Example: Volume of a rotational torus:

If a curve is defined by its parametric shape in an interval , the volumes of the bodies created by rotating the curve about the x-axis or the y-axis are given by

The surface area of these bodies is given by

as an approximation for the volume of a body whose cross-sectional area is known in three places. If the body is a body of revolution, the following applies for rotation around the axis:

For certain rotational body like sphere , cone , truncated cone , cylinder , paraboloid , hyperboloid of revolution and spheroid these are Formula , the exact volume of.