The Internet Archive in San Francisco is a non-profit project that was founded by Brewster Kahle in 1996 and has had official library status since 2007. It was started as a pure web archive , where you can view archived websites with the so-called Wayback Machine . As early as 1999, it was expanded to include additional archives, so that it is now a digital library that contains a significant collection of texts and books, audio files, videos, images and software. The Internet Archive has set itself the task of long-term archiving of digital data in freely accessible form and attaches great importance to access options for blind or otherwise restricted users.

In addition to its function as an archive, the Internet Archive also sees itself as an activist for an open and free Internet and the preservation and distribution of works in the public domain .

Brewster Kahle , founder of Alexa Internet and the Internet Archives (2015)

Brewster Kahle founded the Internet Archive in May 1996 as a non-profit organization under Section 501 (c) (3) of US Income Tax Law . Right from the start, it received a large amount of data from Alexa Internet . As part of web archiving, it saves so-called mementos , i. H. Snapshots of websites and Usenet posts.

From 1999 onwards, the aim was expanded to include a comprehensive, freely accessible library with the addition of the Prelinger Archives and later other collections. Today the Internet Archive comprises a collection of over ten million books and texts, almost three million videos and films, over three million audio files, 150,000 computer programs and more than one million image files. The Wayback Machine web archive now contains more than 431 billion web pages.

The data is stored on 20,000 hard drives in four data centers . A mirror server of the data from San Francisco is located in the Egyptian Bibliotheca Alexandrina . In August 2014, the collection reached a size of 18.5  petabytes .

The archive has been officially recognized as a library by the US state of California since the beginning of May 2007.

According to a statement on its website, since the elections on November 8, 2016 , the Internet archive plans to keep a permanently updated copy in Canada .

The Wayback Machine (“Take Me Back”) is an online service with which you can call up the saved websites in different versions. The pages to be saved are selected via the Alexa Internet service . All URLs stored there are called up and archived regularly. An Internet resource that has not yet been saved can also be recorded manually by searching for the page and then confirming the recording (file contents, e.g. JPG images, are saved without prior request). The total volume was around 150 billion pages in November 2009 and grew to over 273 billion pages by October 2016.

In 2006, Archive-It was another web archive service for individual web archiving. Institutions and individuals have the opportunity to create digital backups of their collections and to determine the release of the data themselves. Archive-It has over 400 partners from 16 countries around the world, mainly from universities, state archives, museums and art libraries, public libraries and other public institutions and NGOs . Archive-It offers participating partners a full-text search for their content, but also the option of exporting structured data sets enriched with metadata for researchers.

The inclusion of the Prelinger Archives in 1999 was the first expansion of the Internet Archive beyond web archiving. Today it contains a good three million videos and films that are under free license or public domain. An archive for television programs is also being worked on here .

In the Million Book Project will be through the Internet Archive books that by the expiry of the copyright (US copyright law ) or otherwise in the public domain have become digitized and made available for download. The digital copies are part of the Open Library . More than ten million books and texts have now been archived.

There are several scan centers (twelve in 2009), for example in Richmond . Scanning is carried out per order, ten US cents per page (as of 2009). The clients, mostly libraries, receive the digitized material, a text file generated by OCR , a persistent Internet address and the option to save the digitalized material on the association's servers. There are also cooperation agreements with self-digitizing libraries for individual services such as OCR and redundant hosting.

The Library of Congress granted six exceptions to the Digital Millennium Copyright Act in December 2006 . The Internet Archive may therefore save computer software or games that have become abandonware with the intention of preserving them if the original hardware, formats or technology are out of date. In 2013, the Internet Archive began offering classic games as playable web browsers - streaming via MESS emulation, e.g. B. the Atari-2600 video game ET the Extra-Terrestrial . From December 23, 2014, thousands of classic DOS computer games will be presented for teaching and research purposes using DOSBox emulation in the browser . 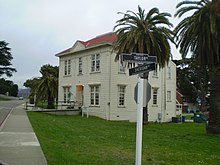 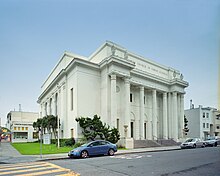 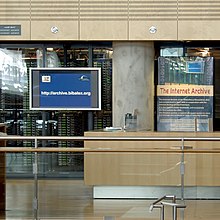 Internet Archive in the Bibliotheca Alexandrina . Behind the glass panes are the racks with the archive computers.

The audio archive has contained over three million sound recordings since 2017 . These range from radio broadcasts and radio features to audio books , poetry readings , live concert recordings and music that has been uploaded by users. The archive can also be used to publish podcasts .

More than 1¼ million image files are already available in the image archive. These are images of works of art ; there is a collection of images from the Metropolitan Museum of Art with over 100,000 entries, images of historical maps, astronomical recordings from NASA , record covers and also freely available recordings from private individuals .

In order to improve the credibility of quoted quotations from books on Wikipedia , there has been a cooperation between Wikipedia and the Internet Archive since 2019 . A start was made on adding digital scans of the cited books to the references in Wikipedia articles. The passage in question is shown on two pages. An example of this is quote number 104 (as of November 14, 2019) in the English-language article about Martin Luther King .