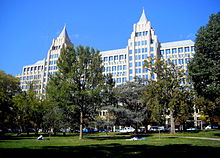 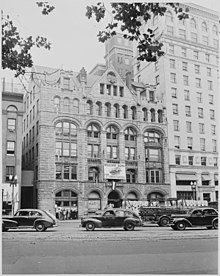 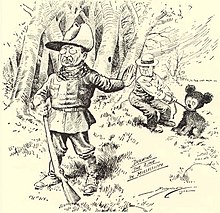 The Washington Post is the largest daily newspaper in Washington, DC , the capital and seat of government of the United States . The "Post" was founded in 1877; it is thus the oldest newspaper still published in Washington, a metropolitan area with over 8 million inhabitants. She was part of the Washington Post Company until 2013 . On August 5, 2013, the sale of the newspaper to Amazon founder Jeff Bezos was announced. The editor-in-chief is Martin Baron (as of July 2020). The Washington Post's motto for its online presence is: Democracy Dies in Darkness (English for "Democracy dies in the dark") 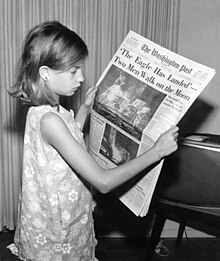 The Washington Post first appeared on December 6, 1877 with an edition of ten thousand copies and had a total of four pages. The founder of the newspaper was the journalist Stilson Hutchins (1838–1912); he had been a member of the Missouri House of Representatives for the Democratic Party since 1866 .

The newspaper was sold to Republican Frank Hatton in 1889 and took a more conservative course. In 1905 John Roll McLean bought the post office , who like founder Hutchins was close to the Democrats. With McLean, the newspaper experienced an upswing in circulation and advertising revenues. This only changed when after his death in 1916 the son Edward Beale McLean, known as Ned, took over the newspaper, who led the life of a playboy. The deteriorating financial situation finally found its nadir in the auction of the sheet 1933 (1929 had global economic crisis started; it was followed in the US, the Great Depression that lasted until the late 1930s).

At the auction of the newspaper, the Californian banker Eugene Meyer got the chance; under his aegis, the Post developed into a profitable company again. After the Second World War, over 160,000 copies appeared daily. His son-in-law Philip Graham eventually took over the management of the newspaper with his wife Katharine Graham ; he was able to build on a grown team of good journalists. Katharine Graham began her career in the group as a journalist in 1939 and, after her husband's suicide in 1963, built it up into a media empire that included radio and TV stations as well as daily newspapers and magazines . In 1954, she acquired the Washington Times-Herald, which appeared in a larger circulation in Washington as the morning paper (emerged from the merger of the Washington newspapers Times and Herald). After the merger, the newspaper initially appeared under both names; the Times-Herald title shrank and eventually disappeared entirely. In 1960, the Washington Post Company also took over the New York magazine News-Week (later: Newsweek ).

The Post's reputation as a national newspaper with experience in investigative journalism dates back to the early 1970s. In 1971 the Post published the Pentagon Papers , which documented deceptions and misjudgments in the Vietnam War . The Post supported the New York Times , which had started printing a few days earlier, in its fight against US President Richard Nixon . The New York Times had previously been banned by a federal judge at the efforts of the federal government from printing further parts of the Pentagon papers, which was the first time in the history of the United States that a newspaper was banned from publication. Both newspapers took the case to the United States Supreme Court and won a landmark ruling on freedom of the press .

The following year, the Watergate scandal was uncovered from June 1972 by the two Post reporters Bob Woodward and Carl Bernstein . Based on a series of smaller articles about conspicuous connections in the presidential election campaign, Woodward and Bernstein were able to gain the trust of a whistleblower known as Deep Throat . He provided them with information from the FBI and thus supported their research, according to which Nixon and his team, among other things, illegally used government agencies, manipulated campaign finances, used illegal methods in the election campaign and obstructed the investigations of the judiciary. The following year the newspaper was awarded the Pulitzer Prize in the category of public service for investigative research by Woodward and Bernstein .

In 1973, investor Warren Buffett took a 10% stake in the post and took over the management of the supervisory board until his retirement in 2011. The newspaper continued to do well.

Together with the New York Times, the “Post” published the worldwide “ International Herald Tribune ”. On December 30, 2002, the New York Times Company took over the shares in "Post"; since then she has edited the “Tribune” alone.

From 2006 to 2007 the newspaper was involved in the Washington radio market. The Washington Post Radio (WPR) as a radio program from Bonneville Broadcasting and the Washington Post was intended to form a commercial version of National Public Radio . The program was transmitted on MW 1500 kHz from WTOP . However, the attempt lasted only one year, then WPR was replaced by other program formats.

In 2010, the Post gave Newsweek for a symbolic dollar.

The economic development of the Washington Post suffers from the fact that it has a national distribution, but that its long-term majority owners are regionally oriented. Maintaining offices around the world was primarily a service for the regional readership that the newspaper could afford until, with the increasing spread of the Internet, its circulation fell into the six-figure range within a few years. The newspaper has laid off employees and closed off-site offices several times since 2003. At the end of 2009 , 700 editors remained in the newsroom (six years earlier there had been 900); Besides the headquarters there are only offices abroad. In Europe, the Washington Post office remained in London. The need for radical cuts was initially reduced because the Post acquired Kaplan, a company that operates private and for-profit colleges , in 1984 as part of a diversification strategy . Kaplan experienced a huge boom in the 1990s; For a long time it was possible to compensate for the losses of the Post in the company as a whole by profits of other parts of the company.

Change of ownership in 2013

Bezos wrote a letter to the employees on the day of purchase in which he stated: “The values ​​of 'Post' do not need any change. The newspaper will remain committed to its readers and not to the private interests of its owners ”and he“ has no intention of interfering with day-to-day business ”.

In an interview a few days later, he announced that he wanted to apply the same three approaches to the paper that had made Amazon great: customers first, innovation and patience. He would give the Washington Post the money it needed over a longer period of time so that management could try out how news spreading could be profitable.

Since the takeover by Bezos, Swiss Post has greatly expanded its team of software developers and optimized its offering specifically for mobile access. The company licenses the software written for this purpose to other media companies, thereby generating a completely new form of income. In a partner program, Swiss Post licenses its online edition free of charge to subscribers of 270 other newspapers (as of May 2015). This enables Swiss Post to obtain data on readers outside of its own subscribers and can also sell individualized online advertisements for these readers.

In the summer of 2015, the post office moved to Franklin Square on K Street.

The Washington Post received numerous awards as one of the most prestigious newspapers in the United States in its history. The most important journalism prize in the country, the Pulitzer Prize , which has been awarded since 1917 , she or journalists working for her received eight times in the category of foreign reporting and five times for a " service to the public ", including 1973 for the exposure of the Watergate affair and in 2014 collaborated with the Guardian for reporting on the NSA surveillance scandal .

The activities of the Washington Post provided the template for lavish cinema productions several times:

In 1889, the newspaper hired United States Marine Band leader John Philip Sousa to compose a march. The Washington Post march premiered on June 15, 1889, as part of a children's essay contest sponsored by the newspaper.