Supreme Court Building in Washington, DC , in 1935 under the architect Cass Gilbert built

Federal courts handle cases that involve constitutional, federal law, federal treaties, and maritime law, or that involve foreign citizens or governments, or the American federal government itself. With a few exceptions, only appeals against decisions of the lower courts are dealt with by the Supreme Court, whereby the American legal system does not have a strict demarcation between appeal and revision . Most of these cases concern the constitutionality of acts of the executive branch and of laws passed by Congress or the state.

The Supreme Court consists of nine judges who are appointed by the Senate on the proposal of the President and serve for life. Most recently, on October 26, 2020 , Amy Coney Barrett, proposed by Donald Trump , was appointed as the successor to long-time judge Ruth Bader Ginsburg , who died on September 18, 2020 .

The Supreme Court is the only American court specifically provided for in the United States Constitution. According to the Judiciary Act of 1789 , the court should consist of six members, namely a presiding judge and five associate judges. Although the number of judges has been nine for most of its history, that number is set by Congress , not the Constitution, and is therefore subject to change at any time. The court met for the first time on February 2, 1790.

The Supreme Court has final appeals jurisdiction, largely at its own discretion, in all federal and state court cases relating to any point of federal law, and has jurisdiction over a limited number of cases, particularly “in all cases, the ambassadors, envoys and consuls concern, and in those in which a single state is a party ”. The Court of Justice has the power of judicial review and the ability to invalidate a law for violating any provision of the Constitution. He can also overturn executive orders of the president for violating the constitution or a federal law. However, he may only act in a legal area for which he is responsible.

Decisions of the Supreme Court can be explicitly overturned through constitutional amendments and in some cases also through legislation. In addition, Congress can pass laws that limit the jurisdiction of the Supreme Court and other federal courts over certain issues and cases. This corresponds to Article 3, Section 2 of the Constitution , in which the jurisdiction of appeal can be restricted "with such exceptions and under such provisions as Congress should make them". The Supreme Court approved such a measure of Congress in the Reconstruction Decision ex parte McCardle (1869), but rejected it in the United States v. Klein (1871) removed the power of Congress to determine how certain cases should be resolved. 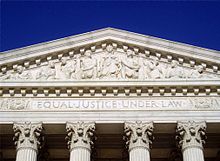 Press conference of a plaintiff's attorney in front of the courthouse

The procedure before the Supreme Court is always the same. Appeal requests are submitted by attorneys who must have a special license, but which only consists of having the right to appear before the state Supreme Court in their own state for at least three years. These lawyers are often represented at the hearing by experienced specialists who are very familiar with the temperament and legal philosophy of the individual judges, as they are better able to parry questions.

In the process innocent people or communities who have the starting interest may voluntarily so-called amici briefs enter, with amici of amicus curiae ( lat. Friend of the Court , English. Friend of the Court derives), and these applications their own opinion and the Support one of the parties to the dispute. Lawyers who file amici are otherwise not allowed to participate in the process and will not be heard during the hearing in front of the court.

All applications are then examined by the judges, who then decide in a free acceptance procedure whether they should hear the case in court. The only important thing is the directional significance of the matter or whether it raises an unresolved legal question, but a possibly incorrect application of the law by the lower court in individual cases is irrelevant. If the judges decide not to hear the case, the proceedings are over. Most of the applications already fail here. Oral hearings will be held for the approved applications .

The oral hearing follows strict rules. The judges enter the room in a ceremonial manner. When the trial begins, the bailiff (Marshall) taps the table twice with his gavel and announces:

“The Honorable, the Presiding Judge, and the Associate Judges of the United States Supreme Court. Hear, hear, hear [French]: All persons who have a matter to hear before the Honorable, the Supreme Court, are invited to stand before the Court and turn their attention to the Tribunal, because its session is now open. God save the United States and this honorable judgment. "

The Chief Justice then opens the session and calls the first case. Now the lawyers take action. Each lawyer is given 30 minutes to present their arguments at the lectern and to defend them against the judges' questions (so-called oral arguments ).

The focus is on questions from the judges. The lawyers are not given the opportunity to make a comprehensive pleading, but are constantly interrupted with questions .

Witnesses will not be heard. The Chief Justice closes the session with the words The Case is submitted ("The case is accepted for decision ").

After the decision and any dissenting opinions (dissenting votes) written down are, they are either read out at a public meeting or set down in writing. Although the College of the Supreme Court knows several deliberations and votes and the position of both parliamentary groups is regularly presented, the judges are not exactly frugal with special votes. This legal culture, which is characterized by individuality, differs, for example, from that of the German Federal Constitutional Court , which acts more consensually ; Special opinions in the case of serious differences or a dogmatically demanding dispute are only published there much less frequently.

The President of the United States nominates candidate judges - usually proven federal judges - who are then appointed to office after questioning by the Senate Judiciary Committee and approval by the Senate . The court consists of eight Deputy Judges (Associate Justices) and a chairman (Chief Justice) together. The constitution states that judges should remain in office during good behavior . In fact, this results in an appointment for life, there is no age limit. However, resignations due to ill health occur regularly. As well as they can all the other judges and other holders of high federal offices by impeachment ( impeachment ) of the House of Representatives be discontinued by a resolution of the Senate.

Appointment directly by the President without the consent of the Senate is only possible when the Senate is not in session (so-called Recess Appointment ) and has recently been rare, as this does not guarantee an appointment for life. It is noteworthy that three members of the Supreme Court were appointed by President Dwight D. Eisenhower by way of a Recess Appointment, namely William Joseph Brennan , Potter Stewart and even Chief Justice Earl Warren .

Especially by nominating relatively young judge candidates, a president can influence the political direction of the USA well beyond his own term of office. As a result, these appointments have often been highly controversial politically in the last few decades.

The first four women who were or are members of the court are: (from left) Sandra O'Connor (ret.), Sonia Sotomayor , Ruth Ginsburg , Elena Kagan . October 1, 2010

In keeping with the ethnic and religious composition of the early USA, the members of the court were predominantly Protestants from various churches until well into the 20th century . The first Catholic was Roger B. Taney in 1836, the first Jew Louis Brandeis in 1916. At present, however, not a single judge is Protestant, although around 40 percent of the American population is ascribed to the Protestant faith. Of the current chief judges, seven formally belong to the Roman Catholic Church and two to Judaism. Neil Gorsuch, who was raised a Catholic, also attends Episcopal church services.

There is currently an African American with Clarence Thomas , the first was Thurgood Marshall in 1967. Samuel Alito is Italian-American , the first was Antonin Scalia in 1986. The first member of the Supreme Court with a Hispanic American background has been Sonia Sotomayor since 2009.

The following table lists some significant cases. In addition to the case name, the reference is given in the official collection of decisions, the United States Reports .

Since 1935 the court has been protected by its own police unit, the Supreme Court Police . Outside the courthouse, the United States Marshals Service is available to the court for all other police functions.