Plessy v. Ferguson is a case ruled by the United States Supreme Court in 1896 and considered a landmark decision in the history of the court. The court had to decide whether an Act of Louisiana , the separate compartments for citizens of white and black color in trains prescribed, contrary to the Constitution of the United States. It denied this with seven to a judge's vote, thereby declaring the provision of separate facilities for whites and blacks to be permissible under certain conditions. Through this judgment, the principle of separate but equal was de facto established as the basis of racial segregation in the southern states .

The decision of Plessy v. Ferguson was founded in 1954 by the Brown v. Board of Education , which only affected the public school system, and later other judgments effectively, but never formally, overturned. In US historiography, Plessy and Dred Scott v. Sandford and Korematsu v. United States widely regarded as one of the worst Supreme Court rulings.

The name of the event, it follows the Anglo-Saxon legal traditions according to the name of the two people involved as litigants, the shoemaker Homer Plessy and the judge John Howard Ferguson, and the abbreviation for the from the Latin taken legal term of art "versus" (German: "against ").

Facts of the case

The reason for the legal dispute in Plessy v. Ferguson was a law passed by the state of Louisiana on July 19, 1890 under the name Separate Car Act . This stipulated separate wagons for whites and blacks for railway trains and a fine of 25 US dollars or 20 days in prison for violations. Some Louisiana citizens decided to challenge this law. They founded a Citizens' Committee to Test the Constitutionality of the Separate Car Act and convinced the then 30-year-old shoemaker Homer Plessy (1862-1925) to deliberately violate the law. According to the one-drop rule, Plessy was legally considered to be black due to a black great-grandmother, but was not externally recognizable as such. The East Louisiana Railroad Company also supported the legal proceedings against this law, albeit for purely economic considerations. Albion Tourgée (1838-1905), a well-known white civil rights attorney from New York, agreed to try the case in court for free.

Homer Plessy purchased a first class ticket on June 7, 1892 for a train on the East Louisiana Railway from New Orleans to Covington , both cities in the state of Louisiana. After taking a seat in a compartment for whites, he informed the train attendant of his parentage. He was then told to vacate the space and instead sit in a black compartment. After refusing, he was arrested but released a day later on $ 500 bail. The entire incident had been coordinated in advance with the East Louisiana Railway .

Judgments of the lower courts

Homer Plessy was found guilty of violating the law by the New Orleans District Criminal Court a month after the incident ( State of Louisiana v. Plessy , 1892). The presiding judge in that court was John Howard Ferguson. In previous decisions, he had declared the application of the law in trains that crossed the borders of the state of Louisiana and thus also in other states to be unconstitutional. In the case of Homer Plessy, however, he ruled the opposite on the grounds that the state could enact appropriate laws for railway operators that would only operate on Louisiana territory. He condemned Plessy according to the law and declared it to be constitutional under the aforementioned restriction.

That same year, the Louisiana State Supreme Court rejected Plessy's appeal against Ferguson's judgment ( Ex parte Plessy , 1892). Two years later, the Separate Car Act was expanded to include provisions on separate waiting areas at train stations. On April 13, 1896, Plessy's renewed appeal was heard before the United States Supreme Court. His reasoning was based on an improper interference with his rights as an American citizen by the Separate Car Act and on the denial of the equality guaranteed by the 14th Amendment . According to his lawyer Albion Tourgée, the law implies an inferiority of black citizens. 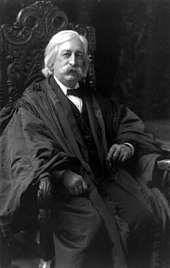 On May 18, 1896, the court, chaired by Melville W. Fuller , ruled 7-1 in a judgment drafted by Judge Henry Billings Brown to dismiss Plessy's action on the grounds that the provisions of the law were constitutional. In explaining this decision, Brown wrote, among other things:

"[...] That the Separate Car Act does not violate the 13th Amendment, which abolished slavery and forced labor except as a punishment for a crime, is too clear to justify. [...] A law that only contains a legal distinction between the white and black races - a distinction based on the skin color of the two races, and which will always exist as long as white people can be distinguished from those of the other race on the basis of their skin color are - has no intention of undermining the legal equality of both races. […] The aim of the 14th Amendment to the Constitution was without a doubt to enforce the absolute equality of both races before the law, but it is in the nature of things that the aim could not be to abolish differences based on skin color, or, im Difference to enforcing political, social equality or a mixture of the two races on conditions that are unsatisfactory for both. [...] "

The court rejected Plessy's view of a violation of the 13th Amendment, as well as the view that the law would imply the inferiority of blacks and thus violate the 14th Amendment . In the opinion of the court, the Separate Car Act merely enforced the usual social principles in the form of a neutral division between whites and blacks. Any asserted evaluation of blacks as inferior in this regard would not result from the law, but solely from the interpretation of this law by the blacks themselves. In the eyes of the majority of the courts, the 14th amendment only referred to legal and political equality, but not to social treatment Equality.

John Marshall Harlan was the only minority judge who rejected this ruling. He predicted that this judgment would in future be just as shameful as the judgment in the Dred Scott v. Sandford would be considered, and justified his decision with the following statements among others:

“[…] The white race sees itself as the dominant race in this country. And it is in terms of reputation, achievement, education, wealth, and power. It will be forever, I have no doubt, if it remains true to its great heritage and adheres to the principles of constitutional freedoms. But in the view of this constitution and in the eyes of the law, there is no superior, dominant, ruling class of citizens in this country. There are no boxes here. Our constitution is blind to skin color, neither knows nor tolerates classes between citizens. In terms of civil rights, all people are equal before the law. The weakest is equal to the strongest. The law sees people as human beings and does not take into account their environment or skin color when it comes to their rights guaranteed by the highest law of this country. It is therefore regrettable that this High Court, the highest instance of the constitution of this country, has come to the conclusion that a federal state may regulate the use of civil rights by its citizens on the basis of race alone. [...] "

Effects of the judgment

Initially, the judgment had no significant immediate consequences. There was no widespread indignation in the media or the public that could be expected, nor were there any noteworthy protests. Homer Plessy pleaded guilty to violating the law in January 1897 and paid the $ 25 fine provided for by the Separate Car Act. He later led a life without further incident and died in 1925.

In terms of its wider implications, however, the decision had dramatic consequences for public life in the southern states. The judgment established the doctrine of Separate but Equal de facto , although this formulation was only included in Harlan's statements in the judgment text. Even in the majority opinion, the reverse phrase "Equal but separate" from the Louisiana law in question was only quoted at one point. The decision, together with the judgment in the Cumming v. Richmond County's Board of Education three years later, the legal basis for legitimizing pre-existing and passing more than Jim Crow racial segregation laws in the southern states. Together with the “Atlanta Compromise Speech”, in which the black civil rights activist Booker T. Washington accepted the social isolation of blacks at the time and suggested a peaceful coexistence with the whites with the aim of gradual improvement, the people in Plessy v. Ferguson contained statements of the court majority also the ideal basis for the racial segregation.

The decision of Plessy v. Ferguson was founded in 1954 by the Brown v. Board of Education , which only concerned the public school system, and later other judgments effectively, but never formally repealed. Together with the Civil Rights Act of 1957 and the Civil Rights Act of 1964 , this marked the official end of the principle of Separate but Equal and thus of legally sanctioned racial segregation in the United States.