Separate but equal ( Engl. For "separate but equal") was in the United States as a social and legal principle, which from 1896 to 1964 in the southern states to the segregation dealing designated by the African-American minority defined and the relationship between the two main population groups . According to this principle, comparable facilities or services were made available for white and black Americans in many areas of life, but their use was strictly separated according to skin color, which is considered to be a manifestation of a policy of segregation . 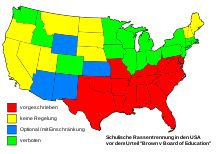 Racial Segregation in School Education in the United States before 1954

Subsequently, the provision of separate facilities for whites and blacks affected large areas of public life in the southern United States, such as schools and universities , hospitals , public transport or hygienic facilities such as water dispensers and public toilets . Although the principle of “separate but equal” officially stipulated that the services for whites and blacks should be the same in terms of scope and quality, in reality they were usually not. Schools for black children, for example, received significantly less state funding than schools for white children. The original court order did not provide for penalties in the event that the separate facilities were not equivalent, and neither did any guidelines on who should review this condition.

The campaign against separate but equal was a central part of the civil rights movement of the 1950s and 1960s. Through the rulings of the Supreme Court in the Brown v. Board of Education and Bolling v. Sharpe was finally ruled unconstitutional in public school segregation in all states including Washington, DC , in 1954 . This meant that the principle of separate but equal was at least officially abolished, even if implementation in practice still took some time.

Racial segregation was finally abolished in the USA by the Civil Rights Act of 1964 , signed by US President Lyndon B. Johnson in July 1964 .

Commons : Segregation in the United States  - Collection of Pictures, Videos, and Audio Files