States by proportion of African American population in 2010:

As African American ( English African Americans ) are about 40 million citizens of the United States of America referred whose ancestors mostly from the south of the Sahara located part of Africa come. The vast majority of them are the descendants of the approximately 6.5 million people during the Atlantic slave trade from 1619 to 1808 of European traffickers to America abducted and especially in the Caribbean and North America as slaveswere exploited. Almost 160 years after slavery was abolished in the United States , the country's African American population continues to grapple with racially motivated discrimination.

In the times of slavery and segregation , anyone with "a drop of black blood" was considered black; In other words, regardless of their external appearance, those people were considered black if they had a "black African" ancestor. At that time these were called "Negroes" or "Colored". However, due to the success of the anti-discrimination and civil rights movement, this racial attribution of the so-called “one-drop rule” has been increasingly questioned as racist since the late 1960s and has lost its importance.

The demarcation of African-Americans from US citizens of European or Latin American descent ( whites and Latinos ) is often difficult today, as there have been strong ethnic mixes over the centuries . There is no generally accepted definition of how many ancestors people are considered to be “European” / “white” or “Afro-American” / “black”. African-Americans often use this term to refer critically to the history of slavery in the United States , thereby differentiating themselves from ethnicizing and racist terms such as “ negro ” or “ colored ”. Another self-designation is "Black" ( black ), which is often very important for political considerations.

The question of who is African American has recently become a common one with the immigration of people from the Caribbean and Sub-Saharan Africa to the US and the increase in the number of people who consider themselves “multiracial” (in English usage) put differently. The election of Barack Obama as President of the United States also contributed to this discussion. Since the 1980s there has also been a strong immigration of sub-Saharan Africans (especially from Nigeria , Ghana and Ethiopia ) to the USA. The children of these immigrants grow up as Americans, but their family biographies are not shaped by the historical experiences of African Americans.

In African American studies , the term African American in the Melville J. Herskovits tradition generally refers to ethnic groups on the American double continent who have ancestors from sub-Saharan Africa.

History of the African American

Africans have been deported as slaves to what would later become the United States' territory since the early colonial days . Most of them did not come directly from Africa to the North American mainland at that time , but were sold to the sugar cane plantations in the Caribbean. The first black slaves on the American continent were Atlantic Creoles . In large numbers, enslaved Africans have been brought directly to the 13 British colonies in America since the 18th century when plantation economies emerged in the southern colonies . 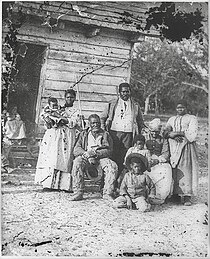 A family of slaves on a South Carolina plantation , 1862

The Declaration of Independence of the United States in 1776 did not lead directly to the abolition of slavery, despite its highly regarded preamble, in which all human beings were granted the inalienable right to life, liberty and the pursuit of happiness. Even the northern states , whose economy relied only to a small extent on the labor of slaves, only gradually passed laws for their gradual release. In the southern states , slavery not only continued, but expanded after the invention of the Egrenier machine from around 1800 made the massive use of slaves on cotton plantations particularly profitable. Abolitionists began to gain influence in the north in the 1830s , and in 1860, with their support, Abraham Lincoln was elected president, who advocated the gradual abolition of slavery. After his election in 1861, eleven southern states left the Union and formed the Confederate States of America . This secession led to the Civil War , which the northern states won. After the Union was restored, Congress passed the 13th Amendment to the Constitution in 1865 , which finally abolished slavery throughout the United States.

The civil war was followed by the brief era of Reconstruction until 1877 , during which the southern states remained occupied by Union troops. At that time, the military administration ensured compliance with the laws that granted former slaves the right to vote and stand for election. After the end of the occupation, however, the southern states immediately set about reversing the emancipation of African Americans as much as possible, for example with the help of the discriminatory " Jim Crow laws ". Also immediately after the civil war, supporters of the former confederation founded the Ku Klux Klan , a racist organization. Its members used terror, violence and lynching against African Americans in order to intimidate and suppress them. The Ku Klux Klan was and is the most striking exponent of a white supremacy ideology that is widespread in the USA to this day. He also counts Jews , Catholics and members of other non- Protestant faiths among his opponents . 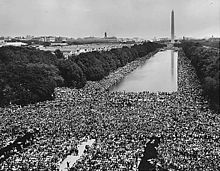 Civil Rights Movement: Closing rally of the March on Washington 1963

The ongoing confrontation with poverty and racial discrimination led from 1910 to 1970 as a comprehensive and long-lasting migration movement, the Great Migration , millions of African Americans from the southern states in the in the course of the Midwest , the Mid-Atlantic States and southern New England , but also to California attracted . As a reaction to the very hesitant legal equality and racial segregation , which had already been legalized under the motto separate but equal since 1896, the Afro-American civil rights movement was formed in the mid-1950s , which included such unequal personalities as Martin Luther King , Malcolm X and later Stokely Carmichael from the Black Panther Party . It tried out a variety of political methods of struggle - such as boycott , civil disobedience and nonviolent resistance - and thereby enforced the abolition of segregation and the at least formal, complete equality of African Americans.

Nevertheless, American society is still characterized by a structural racism up to the present day . The African American population sees itself disadvantaged in a number of ways. Their relatives have fewer educational opportunities and are generally poorer than their white fellow citizens. Their per capita income is only 62% of the median income of a non-Hispanic white, their children grow up disproportionately often in incomplete families, and their husbands are also disproportionately often in prison: around 8 percent of African-Americans are permanently incarcerated . To counteract discrimination and its consequences, organizations such as the National Association for the Advancement of Colored People (NAACP) and programs such as Affirmative Action (“positive discrimination”) were created. The latter is criticized or rejected entirely by conservative whites in particular. Another point of criticism is that support programs for the benefit of African Americans disproportionately often benefit children of African and Caribbean immigrants. The question of whether the descendants of black slaves are entitled to reparation payments has recently been discussed in the USA. After the killing of George Floyd by white police officers in May 2020, which led to nationwide protests and serious unrest , the discrimination against African Americans also returned to international public awareness.

Situation in the United States today

Since the abolition of any kind of segregation in the USA in the post-war period, African-American or Afro-American is now the most common term used to describe membership of an African diaspora . It is used in a similar context to Black . The term Negro , which was still considered "neutral" in the middle of the 20th century and was also used by Afro-Americans themselves, is now considered derogatory and is no longer used.

The term Colored was used in the United States only to refer to people of (partially) sub-Saharan African descent because of their dark / black skin color. People with a different skin color were not included in the term. At the time of segregation there were many separate facilities just for them, for example schools, bus compartments, toilets and waiting rooms at transport hubs. Coloreds belonged to the "non- white people " along with other population groups . As a euphemism , the term has appeared again and again in official texts since the colonial times in the USA. In contrast to the free people of color, colored people were largely equated with slaves. The Colored Soldiers Monument in Frankfort , Kentucky is one of the few war memorials dedicated to the African American United States Colored Troops . The name of the civil rights organization National Association for the Advancement of Colored People can be traced back to the older language usage, today mostly only the abbreviation NAACP is used.

Development of the African American population