The states concerned are also referred to as the southern states or "slave-owning states ". More precisely, however, some of these states remained in the Union. Slavery was economically viable only in the southern states; their legal regulation was a matter for the individual member states. The Union did not abolish slavery until 1865, and this also applied to the southern states after the end of the Civil War.

The reason for the split was the election of Abraham Lincoln as US President in 1860. This election showed that someone could be elected US President even without the support of the South. Many southern states feared falling behind in the long run, as new US states were slave-free and immigration mostly took place in the slave-free states of the north and west.

The Confederate States had a constitution similar to that of the United States; in some respects the constituent states had more rights, in others fewer. The CSA president was elected for six years instead of four, but could not be re-elected. The sole president from 1861 to 1865 was Jefferson Davis .

Shortly after the split, there was a civil war between the Union and the Confederation. The Union had scattered troops in forts across the country, some of them in the south. The reason for the war was the bombardment of one of these forts - Fort Sumter  - by the Confederation.

Without outside support, the confederation had little chance against the industrially more advanced and more populous Union. The war was partially devastating for the civilian population.

The time of the civil war and the reconstruction have left a lasting mark on the regional feeling of the southerners. The regional ties and identification with the values ​​of the Confederation is sometimes controversial because of the slavery at the time.

The background to the secession of the southern states can be found in the different demographic, economic, political and religious developments in the northern and southern states. While the north profited to a large extent from the increasing immigration of white people from Europe, this was less in the south. In the north, industrialization prevailed, while the south remained predominantly an agricultural country whose plantation economy ( peanuts , sugar cane , tobacco , cotton ) was based on the supposed necessity of using slaves . The number of slaves in the north slowly declined as a result of industrialization, while the owners of the plantations in the southern states continued to practice slavery on an increasing scale.

Slavery can be seen as the main reason for secession. With it was connected the issue of what powers the federal government should have over the member states. The southern states feared the loss of their rights in the long term. Until their secession they fought for the maintenance of a strong federalism and thus for a weak union.

Other reasons for the war were of an economic nature. The north wanted to sell its finished products in the south, and the Republicans preferred a protective tariff policy to develop their own industry. However, the south resorted to English finished products, since the ships that brought England with cotton from the south were not supposed to return empty. Likewise, the almost feudal systems in the south - with an economically and politically dominant small layer of landlords and slave owners at the top and everyone below - were seen as a threat to democracy.

As the states in the north gradually officially abolished slavery and the movement towards the complete abolition of slavery ( abolitionism ) grew stronger, the conflict with the south, which mostly clung to slavery, intensified. When with Abraham Lincoln a Republican was elected president (1861-1865), South Carolina declared on December 20, 1860 its exit from the Union . Lincoln rejected the principle of slavery, but was ready to uphold it before and at the beginning of the Civil War, as he wanted to prevent further states from seceding in this way. In general, he could only have abolished slavery through a constitutional amendment that would have required a two-thirds majority in both chambers of Congress .

The secession of South Carolina was soon followed by the states of Mississippi (January 9, 1861), Florida (January 10, 1861), Alabama (January 11, 1861), Georgia (January 19, 1861) and Louisiana (January 26, 1861). On February 4, 1861, a Provisional Congress was constituted in Montgomery from representatives of these states, which united to form the Confederate States of America . The capital was first Montgomery, which was replaced by Richmond after Virginia joined. Texas , whose exit was decided at a convention in Austin , Texas on February 1, 1861 and approved by referendum on February 23, was the last state to end on March 2, 1861, before Abraham Lincoln took office and the start of the Civil War left the Union and joined the Confederate States.

It is true that the Confederate states laid claim to Missouri and Kentucky (hence the 13 stars in the flag of the Confederation instead of just 11), and regiments from these states fought on both sides; a political detachment from the federal state of the United States was never clearly regulated (in Missouri two parties fought against each other from two different "state capitals").

The Union refused to recognize the South. The southern states were also denied international recognition. Although the CSA diplomats tried to gain recognition from Great Britain and France, the British government in particular was only prepared to take this step once the South had won the Civil War.

Course of the civil war 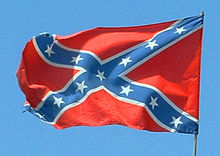 War flag of the CSA in the version of the Confederate naval forces , the so-called "Confederated Navy Jack"

On April 12, 1861, the Confederates attacked the still of federal troops of the Union occupied Fort Sumter in Charleston in South Carolina. The following day the Union troops surrendered there.

In the ensuing Civil War, the Confederate troops achieved several victories, some of which were lossy, such as the Battle of Bull Run . The Northern Virginia Army in particular, under the command of Robert Edward Lee , showed itself to be a match for the troops of the northern states, even if the federal troops penetrated deeply into Confederation territory. The year 1863 can be seen as the turning point of the war, when in July of that year both the strategically important Vicksburg fell to the west and General Lee was defeated at the Battle of Gettysburg .

The south, which was now finally on the defensive, was finally defeated by the north, which was far superior in terms of human and armament potential. General Lee surrendered to Northern General Ulysses Simpson Grant on April 9, 1865 at Appomattox Court House , Virginia ; the remaining Confederate troops, which had been pushed far into the hinterland of the Confederation by the superior Union units, followed in the following weeks.

With this defeat, the confederation broke up, whereupon the secessionist southern states were reintegrated into the union between 1866 and 1870. 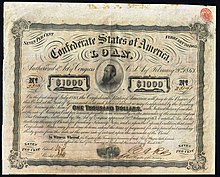 Railway traffic was only intended for short train runs and not for the transport of soldiers and goods over long distances, which played an important role in the war. Jefferson Davis's journey from Mississippi to neighboring Alabama on his departure in 1861 can be used as an example of the serious logistical problem facing the Confederate . From his plantation on the Mississippi , he first took the steamboat downstream to Vicksburg , Mississippi, boarded the train to Jackson , Mississippi, where he took another train to Grand Junction , Tennessee. There he changed trains for the third time, going to Chattanooga , Tennessee. In Chattanooga, he boarded a fourth to Atlanta , Georgia. There Davis got on a train that took him to the Alabama border, where he eventually got on the train to Montgomery, the provisional capital of the Confederate. When the Northern States took control of the Mississippi in 1863, their troops burned down scaffolding and bridges and tore out railroad tracks. The vulnerable Confederate railroad system collapsed and was beyond repair.

The military of the southern states was divided into three branches :