This article deals with the President of the Confederate States of America; for other meanings of the same name, see Jefferson Davis (disambiguation) . 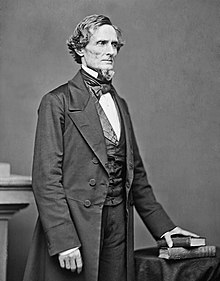 Beauvoir, the 1848 home and library of President Jefferson Davis in Biloxi, Mississippi , before it was destroyed by Hurricane Katrina

Jefferson Finis Davis (* 3. June 1808 in Fairview , Kentucky ; † 6. December 1889 in New Orleans , Louisiana ) was an American politician , from 1861 to 1865, the only president of the Confederate States of America and leader of the southern states in Civil War . He previously served in the United States as Senator for Mississippi and Secretary of War from 1853 to 1857. Davis was a member of the Democratic Party .

Davis studied from 1824 to 1828 at the US Military Academy in West Point and was employed as an officer in the US Army in the Midwest for the following years , where he gained his first combat experience. On June 17, 1835 he married Sarah Knox Taylor , a daughter of the future US President Zachary Taylor , and resigned. However, his wife died of malaria just three months later, on September 15, 1835 . Newly elected member of the US House of Representatives for the Democratic Party , Davis married his second wife on February 26, 1845, Varina Banks Howell , 18 years his junior , with whom he would have six children.

In 1846 he gave up his seat in the House of Representatives to return to serve as an officer in the war against Mexico . He took part in several battles, including the Battle of Monterrey , and achieved the rank of Colonel . After being wounded, he was offered the post of brigadier general in the militia . He rejected this with the argument that only the states had the right to set up militias, not the Union.

In 1847 he took over a vacant seat in the US Senate , in 1851 he was re-elected (by the Mississippi Parliament, direct election of the senators was not yet common at that time). A few months later he gave up the Senate seat and ran unsuccessfully for governor of Mississippi . He then supported Franklin Pierce's candidacy for the presidency. This appointed Davis Secretary of War, which he remained until 1857, only to then successfully apply again for a seat in the Senate.

The Confederation White House, Richmond : Official residence and residence of Jefferson Davis (including his wife and children) 1861–1865

As a moderate southern nationalist, Davis initially spoke out against secession and advocated strengthening the rights of individual states within the Union. After the election of Abraham Lincoln to the 16th President of the United States of America and the secession of South Carolina , however, he declared Mississippi to leave the Union on January 21, 1861 and left the Senate.

After five other southern states split off from the union, Davis was elected provisional president on February 9, 1861 by the Provisional Confederate Congress and sworn in as the first and only President of the Confederate States of America on February 18, 1861 in the State House of Alabama in Montgomery . The election was confirmed by the people on November 6, 1861 (took office: February 22, 1862). Due to the defeat of the Confederate Army in the American Civil War , Davis could not end his six-year term.

On the way abroad to form a government in exile , Davis and his family and other companions were captured on May 10, 1865 near Irvinville , Georgia , by Union forces under James H. Wilson . He was charged with treason on May 24, 1865, and was remanded in custody at Fort Monroe , Virginia until May 14, 1867 , after which he was released on bail. The proceedings were discontinued in 1869. However, his US citizenship was revoked.

After his release in 1867, Davis first left the United States, traveled to Europe with his family and did not return to the United States until 1869, where he took over an insurance company in Memphis that went bankrupt in 1873. Up until 1878 he made numerous business trips to Europe, but his business was not very successful. He also visited Karlsruhe several times , where his youngest daughter Varina Anne Davis , known as "Winnie", spent her school days. An affair with Virginia Clay, the wife of Clement Claiborne Clay , became public and strained the marriage with Davis' wife Varina, who was mostly in England at this time.

In 1878 Davis, meanwhile ill and bankrupt, accepted an invitation from the wealthy widow Sarah Dorsey to retire to her estate at Beauvoir near Biloxi . In 1879 Davis reconciled with his wife there; Ms. Dorsey donated the property to Davis before her death that same year. Jefferson Davis published his memoirs of his tenure as president ( The Rise and Fall of the Confederate Government ) in 1881, and daughter Winnie returned to the United States in the same year. The Davis family's regained reputation and fame resulted in frequent visits from former Confederates, veterans, journalists, and the curious. As he got older, Jefferson Davis placed his representation duties in Winnie's hands, which - despite its German accent - went down in US history as the “daughter of the Confederation”. Four years after Davis' death in 1889, his grave was moved from Atlanta to Richmond , Virginia. His daughter Winnie Davis in 1898 and his wife Varina Davis in 1906 were both buried there with military honors.

On October 17, 1978, Jefferson Davis was posthumously restored to US citizenship .

As for Davis's attitude towards slavery , he wrote in his own memoir:

“As a mere historical fact, we have seen that African servitude among us - confessedly the mildest and most humane of all institutions to which the name 'slavery' has ever been applied - existed in all the original states, and that it was recognized and protected in the fourth article of the Constitution. That persons of the African race were not, and could not be, acknowledged as 'part of the people', or citizens, under the Constitution of the United States. We may well leave it to the instinct of that common humanity, which a beneficent Creator has implanted in the breasts of our fellow-men of all countries, to pass judgment on a measure by which several millions of human beings of an inferior race - peaceful , contented laborers in their sphere - are doomed to extermination. "

“As purely historical facts, we have seen that African bondage among us - admittedly the mildest and most humane of all institutions ever to be called 'slavery' - existed earlier in all the original states and that it is recognized and recognized in Article Four of the Constitution was protected by this. That individuals of the African race cannot, now and in the future, be recognized as 'part of the people', or citizens, under the United States Constitution. Let us confidently leave it to the instinct of that common humanity, which a benevolent Creator has planted in the hearts of our fellow men of all countries, to pass judgment on a measure by which several million human creatures of an inferior race - peaceful, content workers in their own lifeworld - be condemned to be exterminated. "

The Davis couple had a total of six children, the first four of whom were born in Washington during Davis' tenure as Secretary of the United States.

A great-grandniece of Jefferson Davis was Helene von Bothmer (1908–1996), German museum curator and former US model.

The Rise and Fall of the Confederate Government. New York 1881.

Members of the United States House of Representatives for Mississippi