This article covers the state of the United States of America, other meanings under Georgia (disambiguation) .

The north of the state is in the Blue Ridge Mountains . The highest point in the state is Brasstown Bald (1,458 m). The coastline on the Atlantic is 161 km.

In the northeasternmost county, Rabun County , the border begins with North Carolina, which runs from there strictly westward along the 35th parallel. About half of this northern border of the state of Georgia is formed by the border with North Carolina, the other half by the border with Tennessee , which was a territory of North Carolina until it became independent. Georgia borders Chattanooga to the northwest . A little further west, the border makes a sharp turn to the south. Alabama is west of the border. In the northern half, the border runs in a straight line south-southeast until it reaches the Chattahoochee River at West Point , which henceforth forms the border in the southern half. This is also the border between two time zones: Eastern Time in Georgia and Central Time in Alabama .

The southern border with Florida extends from the confluence of the Flint River and Chattahoochee River (which flows further south on the Florida side as the Apalachicola River ) in an easterly direction. At first the border is straight, in the east it follows the course of the St. Mary's River into the Atlantic.

Georgia is divided into 159 counties . This makes Georgia the state with the second highest number of counties after Texas with 254 counties.

The ruins of Dungeness in the Cumberland Island National Seashore (2005)

There are also eleven National Natural Landmarks (as of September 30, 2017).

In addition, there are 49 National Historic Landmarks and 2,141 buildings and sites that are registered on the National Register of Historic Places (as of September 30, 2017). 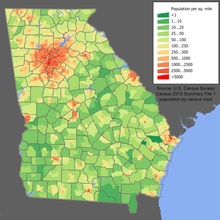 The most important religious communities in 2000 were the Southern Baptist Convention with 1,719,484 members, the United Methodist Church with 570,674 members and the Catholic Church with 374,185 members.

There are many other denominations , mainly Protestant ones .

The first Europeans were the Spaniard Lucas Vázquez de Ayllón , who founded the first colony near the island of St. Catherine's Island in 1526 , and Hernando de Soto , who came to the coast of Georgia in 1540 and explored the region. At that time, the indigenous peoples of the Hitchiti , Muskogee (or Creek) and Yamasee had long lived in Georgia .

In 1566 the Spaniards founded Santa Catalina . The conflict between Spain and England broke out around 1670 when the English from North Carolina and the Spanish from South Florida met. The British named the country Georgia in honor of their King George II . In 1680 they were able to occupy Santa Catalina, Spain.

On November 17, 1732, the English adventurer James Oglethorpe drove to Georgia with 120 comrades to found the first British settlement in Georgia. He and 114 colonists reached Yamacraw Bluff on February 12, 1733 and founded the city of Savannah and thus Georgia. Later other people joined the settlement, such as Salzburger and Schotten. After bloody battles with the Spaniards and internal disputes, the colony received a royal governor in 1752 and a provincial legislature in 1755. In 1776 Georgia was able to break away from the British and became autonomous.

Georgia was one of the 13 colonies that revolted against British rule in North America ( War of Independence ). It joined the United States on January 2, 1788 as the fourth state. In 1798, Georgia became the last of the US states to ban the slave trade , but not the use of slaves . In 1802, it left its claims to the land beyond today's western border to the Union in return for compensation. Conflicts over land settlement for the Creek and Cherokee , which were shipped west into Indian Territory, arose between the federal and state governments in 1838 but were peacefully resolved.

During the Civil War (1861-1865) Georgia was a member of the Confederate States of America and suffered badly from the effects of the war. The Union General Sherman had made a campaign of conquest through Georgia (from Atlanta to Savannah) at the end of 1864, devastating most of the cities and regions that lay on his way.

At the end of 1946 / beginning of 1947 Georgia went through a constitutional crisis and for a short time had three governors: Melvin Thompson, lieutenant governor of Georgia, election winner Herman Talmadge and the outgoing governor Ellis Arnall fought over the office, Talmadge even resorted to military means. The Georgia Supreme Court finally ended the bizarre conflict. In the 1960s and 1970s there were protests by supporters of the civil rights movement , which fought against the racial segregation that was prevalent at the time . From the point of view of the fighters for equality, Georgia was one of the most backward states in the United States. It was not until June 1967 that the state was forced by the Supreme Court to become one of the last states in the USA to lift the ban on mixed marriages . Until then, non-whites were forbidden to marry whites.

Atlanta has experienced an economic and demographic boom in the past few decades. After the airport was expanded in 1980, Hartsfield – Jackson Airport developed into one of the world's largest airports; in terms of the number of passengers (as of 2012), it is the world's largest and has contributed to the boom. UPS has been based in Atlanta since 1991 . An external sign of the economic upswing was the completion of the Bank of America Plaza in 1992 , the tallest building in Atlanta and the tallest in the USA outside of New York City or Chicago . The International Olympic Committee awarded the 1996 Summer Olympics to the city in 1990 .

The state only developed into the Red State at the end of the 20th century . It therefore stands out from most of the other southern states , who made this development an average of ten years earlier. In the first hundred years since the Republican Party was founded in 1854, it did not win a single presidential election in Georgia. It did so for the first time in 1964 , when, in the south, despite the overwhelming victory of Democrat Lyndon B. Johnson , the rise of the Republicans began. After that, the Democrats were able to win the elections in Georgia in 1976 and 1980 , when Jimmy Carter, the former governor of Georgia, and most recently in 1992 with Bill Clinton from the southern state of Arkansas . Since the 1990s, the Republicans have also provided the US Senators of Georgia, who were otherwise traditionally Democrats; Senator Zell Miller also appeared as a Democrat in the Republican nominating convention in 2004 on to John Kerry politically embarrass. The current senators are David Perdue and Kelly Loeffler . Georgia's delegation to the 116th Congress House of Representatives consists of nine Republicans and five Democrats.

With the liberalization of the Democratic Party at federal level, it is becoming increasingly difficult for it to achieve success in the conservative area of ​​the Deep South . In the Electoral College Georgia in 1988 twelve presented, in 1992 then 13 and 2004 15 electors. In 2012 there were 16 for the first time.

In Georgia, the death penalty is part of the law. It is imposed and continues to be carried out. Georgia ranks sixth among the most executed death sentences in the United States. (To Texas, Oklahoma, Virginia, Florida, and Missouri). During Governor Nathan Deal's tenure, a relatively large number (19 of 65 [as of May 2016]) death sentences were carried out. In 2015 and 2016, only Texas carried out more death sentences.

Since April 24, 1979, the official anthem of the state is " Georgia on My Mind " by Hoagy Carmichael and Stuart Gorrell .

In 1892 the Coca-Cola Company was founded in Georgia. Atlanta is also the headquarters of the airlines Delta Air Lines and AirTran , as well as the news channel CNN . At the end of the 1990s and at the beginning of the new millennium, many companies were drawn to Georgia because of the low tax rate.

In "Peach State" Georgia cotton , rice , tobacco , sugar cane , peanuts and various kinds of fruits are grown. In the cities there are predominantly textile , wood and food industries . 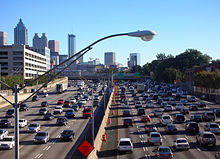 Public transportation is handled by the state's Department of Transportation , the Georgia Department of Transportation . Several interstate highways run through Georgia . I-75 , which runs from the Great Lakes to Florida , runs north-south . On March 18, 1998, the Georgia House of Representatives passed a resolution to name a northern section of I-75 after Larry McDonald ( Larry McDonald Memorial Highway ). McDonald was a Democratic member of the US House of Representatives and was killed when the Soviet Union shot down a Korean Airlines plane on September 1, 1983 . Other interstates in Georgia include Interstate 85 from Virginia to Alabama and Interstate 20 from Texas to South Carolina. I-20, I-75 and I-85 intersect in Atlanta and partially form a city ring. In addition, Interstate 95 , which runs from Maine to Florida along the east coast of the USA, and Interstate 16 from Savannah to Mason through Georgia. The latter connection is located exclusively in the state and ultimately connects the seaport of Savannah via Mason and the I-75 with Atlanta. Smaller feeders make up the rest of the interstate network in Georgia. 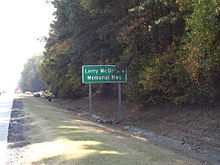 A section of Interstate 75 north of Atlanta, GA is named for Democratic Representative Larry McDonald.

Hartsfield – Jackson Atlanta International Airport (ATL) is by far not only the largest airport on the American east coast, but also one of the world's largest airports in terms of passengers . More than 90 million passengers are handled there every year. Besides Hartsfield-Jackson, only the Savannah / Hilton Head International Airport is of international importance. Other commercial domestic airports are located in Augusta , Columbus , Albany , Macon , Brunswick , Valdosta and Athens .

The Georgia Ports Authority is responsible for port operations in the two larger seaports of Georgia, the port of Savannah and the one in Brunswick. The Port of Savannah is a deep water port and one of the largest on the US east coast. The port of Brunswick is one of the leading ports in the USA for handling automobiles (both import and export).

The Metropolitan Atlanta Rapid Transit Authority (MARTA for short) is the state's most important local transit system. Initially founded as a bus network in 1971, it now also has a 77-kilometer-long rapid transit network with 38 stations. MARTA operates almost exclusively in the two counties of Fulton and DeKalb . The Hartsfield-Jackson Atlanta International Airport is also connected. In 2009 around 482,000 passengers used the bus and train network every day.

The CNN Center in Atlanta

According to calculations by Nielsen Media Research, the Atlanta metropolitan area is the ninth-largest media market in the United States. The other larger media markets, on the other hand, fall significantly in size: Savannah (rank 95), Augusta (rank 115) and Columbus (rank 127).

The Springer Opera House , which opened in 1871, has been the State Theater of Georgia with the appointment of Jimmy Carter since 1971/72, confirmed by legislation in 1992.

The rich cultural heritage of the Antebellum period, ie the period before the Civil War , has inspired a number of famous novels, including Margaret Mitchell's Gone with the Wind , Alice Walker 's The Color Purple and Cold Sassy Tree by Olive Ann Burns .

A number of writers, poets, and screenwriters have lived in Georgia, including James Dickey , Flannery O'Connor , Sidney Lanier , Frank Yerby, and Lewis Grizzard .

Georgia is one of the most popular filming locations in the United States thanks to 30% tax breaks. In 2012 Georgia shot 76 television series, specials, and films. Only in California in 2012 more television productions (215) were shot. Series like The Walking Dead , Drop Dead Diva and the BET series are filmed in Georgia.

Counties in the US state of Georgia