The title of this article is ambiguous. See Iowa (disambiguation) for other meanings .

Iowa ( English pronunciation  [ ˈaɪ̯əwə ] ) has been the 29th state of the United States of America since joining the Union on December 28, 1846  . The state is located in the Midwest and is known for growing corn and its wide open spaces. The only exceptions to the village and small town structure are the large regions around Des Moines , Cedar Rapids , Davenport and Sioux City .

Iowa is located in the American Midwest. The state is bordered by Minnesota to the north, Nebraska and South Dakota to the west, Missouri to the south, and Wisconsin and Illinois to the east .

The Mississippi River forms the state's eastern border. In the west, rivers also form the state border - south of Sioux City it is the Missouri River , north of it the Big Sioux River . The topography of the state is characterized by hilly plains. Loess elevations can be found along the western border, some are several hundred meters thick. The so-called Iowa Great Lakes are among the few naturally formed lakes - including Big Spirit Lake , East Okoboji Lake and West Okoboji Lake . You are in the northwestern part of the state near the Minnesota border.

The annual rainfall in Iowa decreases towards the northwest. The more forested areas of the south and east merge into the high grass prairies of the Great Plains in the north and west .

The lowest point is the Mississippi River at Keokuk in southeast Iowa (175 m); the highest point is Hawkeye Point (509 m). In relation to the area, the height differences are small.

Most of the residents of Iowa have European ancestry. With around 36 percent (2014), people of German origin form by far the largest group. The Amana Colonies on the Iowa River are still German today.

The largest religious community in Iowa is the Roman Catholic Church, which makes up around 23 percent of the population. The individual Protestant denominations are much less strongly represented. However, if the various Protestant groups are added together, Iowa is more Protestant. The religious communities with the largest number of members in 2000 were the Catholic Church with 558,092, the Evangelical Lutheran Church in America with 268,543 and the United Methodist Church with 248,211 followers.

The building "Trinity Church" in Manning became famous . Because of the reduced community, it was laboriously transported on a low-loader to a place 10 km away.

When asked "What is your religion?", Iowa residents replied in 2001:

In the northeast of the state on the banks of the Mississippi River lies the Effigy Mounds National Monument , a memorial and archaeological reserve for artificial mounds called mounds, which were created by an early indigenous culture in the Woodland period between 500 BC. BC and around the year 1200 were built.

The state was named after the Iowa nation and in 1846 the 29th state. Iowa is also known as Hawkeye State as a tribute to Chief Black Hawk .

With its fertile prairies and predominance of agriculture , Iowa is one of the typical states of the Midwest , as 90 percent of the area is used for agriculture. Iowa is also called Corn State because of the growing of corn . Hunting and fishing are popular. There are also many parks, often of historical importance.

Iowa's first capital was Iowa City . When the population center moved westward due to increasing settlement, it was decided to move the capital closer to the geographic center of the state. In 1857 Des Moines was designated the capital. Iowa supported the Union during the American Civil War . No battles took place within the national territory. The closest battle was that of Athens, Missouri (1861). Governor Samuel J. Kirkwood sent 116,000 men from Iowa to the Union Army (out of a total population of 675,000).

Iowa has always pioneered civil rights. In 1839 the Iowa Supreme Court , the highest court in the state, declared slavery unlawful decades before the civil war resolved the matter nationally. In 1868, the court ruled that forms of segregation , such as racial segregation in schools, were not permitted in Iowa, while the US Supreme Court did not do so until 1954 in the Brown v. Board of Education passed a judgment to this effect. In 1873, the Iowa Supreme Court ruled that racial discrimination in public institutions was against the law, nearly a hundred years before the national court ruled.

In 1869, Iowa became the first state to allow women access to legal professions.

In 2009, the Iowa Supreme Court unanimously ruled that state law prohibiting homosexual marriage violates the constitutional principle of equality and is therefore void. This made Iowa the third state after Massachusetts and Connecticut in which same-sex partners are allowed to marry.

The state is of particular importance in the election campaigns for the US presidency : Iowa is traditionally the state in which the first party primaries are held. They give the people of Iowa great political weight in election years.

Iowa is also a swing state , where it is difficult to predict election results. Although Iowa was democratic from the late 1980s to the turn of the millennium, Iowa fell to the Republicans for the first time since 1984 in the 2004 presidential election , with a very slim result . In 2008 the Democrats won the majority again; This succeeded again in 2012 . In the 2016 election, however, the Republicans won again significantly. Iowa currently has six electors in Electoral College since 2012 . In 1988 there were eight.

Members of the 117th Congress

Iowa abolished the death penalty for the first time in 1872 , but reintroduced it in 1878. It was abolished again in 1965. Efforts to introduce the death penalty for cases of kidnapping, sexually assaulting and killing children failed in the Iowa Senate in 2006 . Still, the previous year the Sioux City Federal District Court sentenced two defendants to death in the state's first death sentence in 40 years.

The metal band Slipknot hails from Des Moines , Iowa. In addition, their second album was named after the state.

There are also seven National Natural Landmarks (as of September 30, 2017). 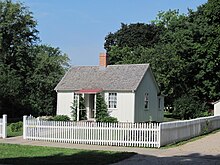 The NPS maintains a National Historic Site and a National Monument for Iowa :

Iowa also has 26 National Historic Landmarks and 2,365 structures and sites that are on the National Register of Historic Places (as of September 30, 2017).

Iowa's main products are pork , corn , soybeans , potatoes , beef and dairy products . Other products are goods for food production, machines, electronics, chemical products, as well as products of the printing trade and the metal industry. The tractor was invented in the small village of Froehlich in northeast Iowa . Today the tractor manufacturer John Deere produces a considerable part of its products in the factories in Davenport and Waterloo. The state of Iowa is part of the Corn Belt .

States , federal district and exterior areas of the United States

Counties in the US state of Iowa