The title of this article is ambiguous. Additional meanings are listed under Indiana (disambiguation) .

Indiana ( English Indiana ? / I [ ˌɪndiˈænə ]) is a federal state of the United States of America , the capital is Indianapolis . The postal abbreviation of the state is IN . With an area almost twice as large as the German state of Lower Saxony , it is one of the medium-sized US states. The residents of Indiana are called Hoosier , hence the nickname The Hoosier State . Indiana means "land of the Indians".

Indiana is bounded in the north by Lake Michigan and the state of Michigan , in the east by Ohio , in the south Indiana shares the Ohio River with Kentucky as a border river, in the west is Illinois . The highest point in Indiana is Hoosier Hill in Wayne County in central east Indiana (1,257 ft (approx. 380 m)), the lowest point at 320 ft (approx. 100 m) is the confluence of the Wabash River with the Ohio River in southwest Posey County . With an average height of 700 ft (approx. 210 m), Indiana's profile is one of the flattest in all of the US states.

For a breakdown, see the list of counties in Indiana .

Indiana was one of three US states that did not initially switch to daylight saving time . Exceptions to this were the counties on the western border with Illinois (LaPorte, Porter, and Lake Counties in the metropolitan area of Chicago , as well as Spencer, Warrick, Vanderburgh, Posey and Gibson counties in the southwestern tip of the state in the area of ​​Evansville), which the Central Time incl Daylight saving time (UTC − 6 Central Standard Time / UTC − 5 Central Daylight Savings Time) followed.

The rest of the state stayed on Eastern Standard Time (UTC − 5) year round . Unofficially, however, some residents in the border areas of Cincinnati , Ohio and Louisville , Kentucky set their clocks to UTC − 4 (Eastern Daylight Savings Time) in the summer, especially when commuting to these states for work. On April 28, 2005, the Indian State Legislature resolved that daylight saving time would apply to all counties from 2006 onwards.

Before the first Europeans came to Indiana, Delaware , Miami , Potawatomi , Shawnee , and Wea Indians lived there .

French explorers from the north entered the country in 1679 . From 1763 the country was occupied by the British , who initially hardly used it. In 1787 Indiana became part of the Northwest Territory . In 1800 the Northwest Territory was reduced to the size of the future state of Ohio, the rest (including the future state of Indiana) became a separate territory called the "Indiana Territory". With the creation of the Michigan Territory in 1805 and the Illinois Territory in 1809, the Indiana Territory was reduced to the area of ​​the present state. In the Battle of Tippecanoe in 1811, troops of the United States of America led by then Governor William Henry Harrison fought against Tecumseh's Indian Confederation in front of Prophetstown , the main camp of the Indian Confederation near what is now the Battle Ground , Indiana. Indiana became the 19th state to join the union in 1816. The Indiana Colonization Society was established as early as 1829, modeled on the American Colonization Society . Both organizations had the goal of creating a new home for Afro-Americans; in this case the Indiana Territory was chosen because it was expected that the costly repatriation to Liberia in West Africa would only be possible for a limited time and group of people. For this reason, today's US state of Indiana maintains particularly close relationships with Liberia.

Indiana stayed in the Union during the Civil War . Indian regiments participated in all major battles of the civil war. The state provided 208,367 men for the Union Army in 126 infantry regiments , 26 artillery batteries and 13 cavalry regiments . In the 1920s, several Indian residents joined the racist terrorist organization Ku Klux Klan . The revelations of the former Grand Dragons DC Stephenson revealed that approximately a third of the male whites were members of the clan in the mid-1920s. After the revelations, there was a wave of withdrawals from which the Klan never recovered.

As part of the industrial revolution, parts of India were also industrialized. In this context, unions were formed and the women's suffrage movement spread their ideas. The natural gas and oil boom in central and middle east Indiana, centered in Trenton , led to further industrial development since 1880. However, a large part of the natural gas escaped unused, so that production had been declining since around 1910. In the early 20th century, Indiana also became a steel producing state; the north and center of the state became part of the Manufacturing Belt . Haynes Automobile Company , the first nationally successful automobile manufacturing company, operated in Kokomo until 1925. The Indianapolis Motor Speedway was completed in 1909.

During the 1930s, like the rest of the nation, Indiana was hit by the Great Depression . Urbanization declined and the effects of the Dust Bowl hit Indiana. Governor Paul V. McNutts administration took care of the development of a welfare system. McNutt ended prohibition and introduced the income tax. He declared martial law several times to suppress strikes. The Second World War brought back an economic recovery in Indiana. Steel, food and other goods were produced. About ten percent of the population served in the armed forces. Indiana accounted for 4.5 percent of the goods used by the Army (8th out of 48 states). This upswing in production ended the effects of the Great Depression.

With the end of the Second World War, the level of production before the Great Depression was reached again. Industrial companies became the main employer. In the 1950s and 1960s, urbanization increased and cities grew. Auto, steel and pharmaceutical industries were the most important sectors. Indiana's population grew steadily until it exceeded five million in 1970.

In Indiana's schools in 1949 segregationist canceled. In 1950 the population was 95.5% white and 4.4% black . The 1973 oil crisis led to a decline in orders and production in the automotive and automotive supplier industries. Delco Electronics and Delphi have been cutting jobs over a long period of time. This affected the locations in Anderson , Muncie and Kokomo . This trend continued until the 1980s when the economy temporarily recovered through diversification. The north and parts of central Indiana are now part of the US Rust Belt . 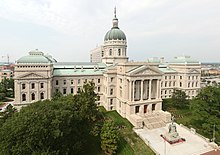 Indiana is one of the strongholds of the Republicans : a typical Red State in the American Midwest , characterized by agriculture and rural and small-town settlement structures. The population share of white is high at 86 percent and corresponds roughly to the neighboring states of Ohio (83) and Wisconsin (88), but the population of the state is characterized by a certain cultural isolation. Instead of like most states of the Midwest, Indiana was not settled from the east, but mainly from the southern states , which influences the political and social orientation to this day. The Democrats have stronger centers only in the industrial towns on Lake Michigan and in Indianapolis . The Republicans are particularly in the populous suburbs of Indianapolis

strong in the center of the state, which are located in so-called donut counties such as Hamilton County . The northeast of the state is dominated by the Christian right . Among the state's Republicans, there is a more moderate sociopolitical tendency, for which former Governor Mitch Daniels and former Senator Richard Lugar stand, and a conservative tendency, shaped by the tea party movement and a political confrontation, whose leader Mike Pence is. In the underdeveloped, rural southern part of Indiana, the Democrats had long had another stronghold, where they had been regarded as the advocate of the common people; In the course of aligning regional party strongholds with national trends in Barack Obama's presidency , this conservative area was given republican preponderance.

Republican dominance is particularly evident in presidential elections. Even Franklin D. Roosevelt could only win in Indiana in 1932 and 1936. After him, only Lyndon B. Johnson in 1964 and Barack Obama in 2008, who won the neighboring state of his native Illinois with a 0.9% advantage of the vote, managed to do this as the Democratic presidential candidate . In the Electoral College of the presidential election Indiana currently has 11 votes.

In the United States Senate , Indiana is represented by Republicans Todd Young and Mike Braun . The state sends seven Republican and two Democratic MPs to the House of Representatives of the 116th Congress .

Mike Pence , who was in office from 2013 to 2017 , has served as Vice President of the United States since 2017. He is succeeded by his former lieutenant governor, Republican Eric Holcomb . 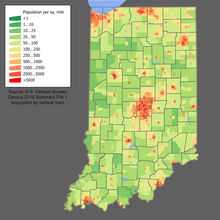 Indiana is a low-urbanization state and therefore predominantly small towns and medium-sized centers. The largest city and capital at the same time is Indianapolis, where one of the most famous car races in the world, the so-called Indy 500 , takes place every year.

The religious communities with the largest number of members in 2000 were the Catholic Church with 836,009 and the United Methodist Church with 288,308. 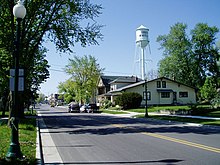 Typical of the Midwest: The small town of South Whitley with Main Street and water tower (2005)

The Indianapolis Motor Speedway is located in Indiana . The Indianapolis 500 or Indy 500 race has been held there since May 30, 1911, making it one of the oldest and most traditional circuit car races in the world. It has been the highlight of the IndyCar Series racing calendar since 1996 . Three professional sports teams from the top leagues come from Indiana. These are the Indianapolis Colts (Football - NFL ), the Indiana Pacers (basketball - NBA ) and the Women of Indiana Fever (basketball - WNBA ). In ice hockey, the Indiana Ice team is represented in the USHL junior league . Well-known among college sports teams are the Indiana Hoosiers men's basketball teams and the Notre Dame Fighting Irish .

There are also 30 National Natural Landmarks , 42 National Historic Landmarks, and 1903 structures and sites that are listed on the National Register of Historic Places (as of September 30, 2017).

In art and culture

In addition to the state song, Back Home Again in Indiana is the most famous song associated with Indiana. It was used in the Indianapolis 500 auto race and became a well-known jazz standard through recordings by the Original Dixieland Jass Band , later by Red Nichols , Lester Young and others.

Counties in the US state of Indiana