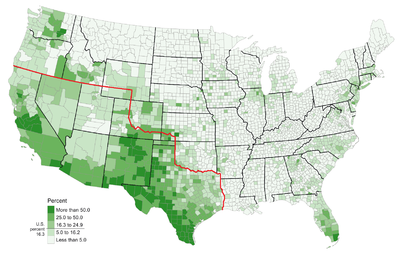 Hispanic population in the United States in 2010. In red, the northern border of the Republic of Mexico (until 1848).

The Hispanics are an ethnic group in America that all residents with Hispanic American or Spanish includes origin. The term was coined by the US government in the 1970s. Due to the mixing of different ethnicities in the USA over the past 400 years, the term has no distinctive character ; membership of the Hispanics is essentially based on a self-assessment that US citizens make every ten years in a census using a questionnaire. For 2014, the US Census Bureau gave their share at 17.4%, they are considered the largest minority .

The color of the skin does not play a role in the assignment to this demographic ethnicity. Non-Hispanic whites, for example German-Americans , are either referred to as white people (also Caucasian ) or simply as "Anglos".

In 1950 there were four million Hispanics in the United States. Their number rose from nine million (1970) to around 15 million (1980) and by 2003 to around 45 million (around 13.4% of the total population of the USA). This strong increase is due to large immigration flows and high birth rates . Hispanics are the fastest growing and youngest age group in the United States. It is estimated that nearly 25% of the US population will be Hispanic by 2050.

The term " Latino " is often used synonymously with that of Hispanic, but in fact the terms are not synonymous. In a scientific sense, Latino only refers to the Hispanics who immigrated from Central and South America, but not Spanish immigrants from Europe and their descendants. These are therefore Hispanics, but not Latinos. Conversely, Brazilians who immigrated to the USA are Latinos, but not Hispanics.

The following paragraph is not adequately provided with supporting documents ( e.g. individual evidence ). Information without sufficient evidence could be removed soon. Please help Wikipedia by researching the information and including good evidence.

A large proportion of Hispanics speak Spanish better than English , which is particularly true of first generation immigrants or those who immigrated to the United States a few generations ago.

Often it is not "pure" Spanish ( Castellano ), but a Spanish with many anglicisms . Examples: "Quédate cool !" (Keep calm!) Or "El play está full ." (The stadium is full.)

There are certain sub-groups within the Hispanic group:

On the other hand, immigrants from countries in Central and South America , in which predominantly languages ​​other than Spanish are spoken, do not count as Hispanics, e.g. B. Brazilians , Jamaicans , Haitians , Guyaners and Belizeans (although the latter are mostly fluent in Spanish).

Due to often similar social and political interests (promoting bilingual teaching, making it easier to obtain US citizenship , improving medical care and working conditions for the socially disadvantaged, anchoring religious values ​​in politics or combating discrimination ), the trend is towards individual subgroups for increased identification with the entire group of Hispanics, since here one's own cultural identity and interests can be better represented towards the majority of white non-Hispanic US citizens.

Cultural and Political Importance to the United States of America Today

The history of the Spanish settlers, to which the Hispanics go back - expanded by numerous influences, especially from the area of ​​the Central and South American natives - is closely interwoven with that of the USA. The first cities on the territory of today's USA, namely St. Augustine (today's Florida, founded in 1565) and Santa Fe (today's New Mexico, founded 1610), were founded by Spanish settlers and stood before the first Pilgrim Fathers , who in the historical The founding myth of the USA, set foot ashore (1620).

Because of their demographic development as the largest US minority since 2003, which is already the majority in some parts of the southwestern US (especially in California and New Mexico), and their strong political mobilization as a relatively uniform group, their perception has been since the 1980s Years. Several factors contribute to their political importance:

All three factors reinforce the political importance of Hispanics, who are thus the politically most courted minority.

With Bill Richardson , the only Hispanic governor in the USA (state of New Mexico, member of the Democratic Party ), a promising candidate from the ethnic group applied for the presidency for the first time in 2008.

A flag, which is also relatively little known in the USA and is used as a symbol of the Hispanics, bears three crosses as a symbol for the three caravels ( Niña , Pinta and Santa Maria ) with which Christopher Columbus sailed to America. Behind the middle cross is a setting sun, which represents the New World . This flag was first used in 1933 during the Pan American Conference in Montevideo .

In late July 2020, the House of Representatives voted to establish a National Museum of Hispanic Culture on the National Mall under the responsibility of the Smithsonian Institution . A corresponding legislative initiative in Congress had existed since 2011.