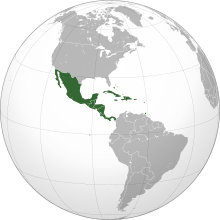 Map of Central America and the neighboring states

Geographically, Central America is a greater region of North America, but historically it can be viewed as an independent cultural area . Mexico is often also counted as Central America (because of its cultural and linguistic history belonging to Latin America or Ibero America).

On the land bridge, in addition to various indigenous languages, mainly Spanish is spoken due to the colonization . Exceptions are the English-speaking Belize and the east coast of Nicaragua , which is inhabited by English-speaking Creoles in addition to the indigenous peoples Miskito , Mayangna , Rama and Garifuna . There are also communities on the Caribbean coast of Guatemala , Honduras , Costa Rica and Panama in which mainly Creole English, similar to the Jamaican patois , is spoken.

English, French , Spanish and Dutch are spoken on the islands of the Caribbean .

The inhabitants of Central America are descended from the native Indians (on the mainland - the Caribbean indigenous people are almost exterminated), the European colonialists and immigrants and black African slaves .