The West Indies (West Indies) consist of several archipelagos off Central America and South America in the Atlantic Ocean . The great arch of islands in the Antilles forms the northern and eastern borders of the Caribbean Sea . Further north are the Bahamas and the Turks and Caicos Islands (which are sometimes referred to as " Lucayen ").

The West Indies in the Caribbean are divided into: 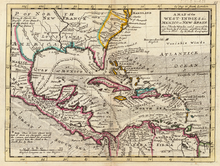 In the historical name West India , the part of the name ... india is derived from the fact that Christopher Columbus actually wanted to find the western sea route to "India" (that is, East Asia) and on his four journeys he was never aware that he had found a new continent .

However, the name is misleading. West Indian usually means "in the west of India," which is not the case in this case. Rather, the naming is based on the fact that the West Indies were discovered on the western route to India - in contrast to the previously known India, which was always associated with the idea of ​​the route to the east (" East India "). That there was a western sea route from Spain to India was an assumption that was also expressed by the English philosopher Roger Bacon , who referred to Seneca, Pliny and Aristotle.