The title of this article is ambiguous. Further meanings are listed under Antilles (disambiguation) .

An archipelago in the Caribbean is called the Antilles . It consists of the Greater and Lesser Antilles . Together with the Turks and Caicos Islands (which are sometimes summarized under the term Lucayen ) they form the West Indies . The Antilles limit the Caribbean Sea to the north and east. 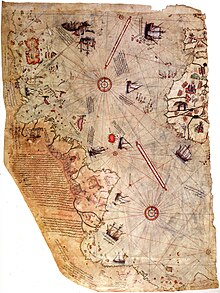 Map of the Piri Reis

The name of the archipelago is said to derive from the mythical island of Antilia , a small island in the Atlantic that is said to have been inhabited by a Christian community.

According to another theory, the name is derived from Latin (or Romance ) ante , which means "in front of" and could refer to the location of the islands "in front of" the continent.

On the Ottoman map of Piri Reis from 1513, an island is marked with antilia in Arabic script , the location behind it is assumed to be the island of Cuba.