This article covers the small state of St. Lucia in the Caribbean; for further meanings see Santa Lucia .

St. Lucia or English Saint Lucia (pronunciation in the local language : [ seɪnt ˈluːʃə ]) is an island state in the West Indies in the Caribbean and a member of the Commonwealth of Nations .

According to tradition, the name used today goes back to French sailors who were shipwrecked on December 13, 1502, the feast of the Blessed Virgin and Martyr Lucia of Syracuse , and named the island after Saint Sainte Alousie . The name was later adopted by French chroniclers with slight variations .

The island state consists of several islands , of which the main island of Saint Lucia is by far the largest. The islands are part of the Leeward Islands , which in turn are part of the Lesser Antilles . St. Lucia is north of St. Vincent and the Grenadines and 33.2 km south of Martinique . 146 km to the southeast is Barbados .

The capital and largest city of the country is Castries in the west of the main island. The highest point on the island is Mount Gimie at 950 meters. The coastline is 158 kilometers long. On the island, south of Soufrière , there are two inactive volcanoes, the Gros Piton and the Petit Piton (also known as Twin Pitons ). The area around the volcanoes is on the list of UNESCO World Natural Heritage . The main rivers on the island are the Cul de Sac and the Canelles . 27.9% of the area is covered by forests.

The majority of today's island population is descended from black Africans who were brought to the island as slaves during the colonial era .

The official language, English, is mainly spoken. In addition, will Antillean Creole (Patois Kwéyòl or called), a French-based creole language spoken. Life expectancy is 76.45 years, the average age 29.8 years. 28% of the population live in cities, the rate of urbanization is 1.4% per year. 82.5% of the population are dark-skinned. Approximately 12% of the population are of mixed and 3% Asian (mainly Indian) ancestry. The rest is made up of whites and other population groups.

The natives of St. Lucia called their island Iouanalao , which according to the Amerindian dictionary of the Dominican missionary Raymond Breton (around 1650) means something like There where the Iguana is found (= "where the iguana lives"). In 1663 the island was sold to Barbados .

St. Lucia was discovered by Christopher Columbus on his third voyage around 1500. After the first attempts to settle in the early 17th century failed, the French finally settled the island around 1650. After disputes between the United Kingdom and France over ownership of the island, in which the island changed a total of 14 times, the British finally obtained the right to the island through the decision of the Congress of Vienna in 1814.

As in many other colonies, the British brought people from Africa to the island to do slave labor on the sugar cane plantations. Even after the British liberation of slaves in 1834, many former slaves continued to work on the plantations as seasonal workers.

While the crown colony was part of the autocratic administrative association of the Islands from 1938 onwards, a parliament developed through general and equal elections as early as 1922 . Since the elections to the National Assembly in 1951, the principles of universal, equal, secret and direct suffrage, including women's suffrage, have applied . The right was first exercised on October 13, 1951. From 1958 to 1962 St. Lucia was part of the West Indian Federation until 1966 when it was given the status of an autonomous state associated with Great Britain.

In 1979, St. Lucia became a parliamentary monarchy and a member of the Commonwealth of Nations , which gave it independence. The active and passive right to vote for women was confirmed.

After the reign of the socialist Saint Lucia Labor Party from 1979 to 1982, the conservative-liberal United Workers Party ruled since 1982 with Prime Minister John Compton , who held the office for a long time. He campaigned for the country to conform to the West.

The Parliament consists of the House of Assembly as the lower house and the Senate as the upper house.

St. Lucia has no military, but there is the Saint Lucia Police Force , which also includes a Special Service Unit and the Coast Guard.

According to the law, schooling is free and compulsory from the age of 5 to the age of 15. Illiterate people are in the minority. Public spending on education was 5.8% of GDP over the period 2002-2005. Part of the University of the West Indies is located in St. Lucia.

The Ministry of Education publishes the Kwéyòl Dictionary , which was developed by the teacher Jones Mondesir and has been used since 2001 in a child-friendly version for the preservation and orthographic standardization of Creole . 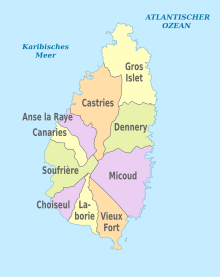 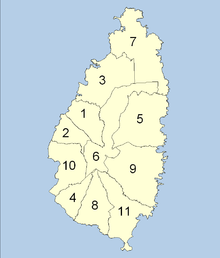 St. Lucia Department of Statistics districts at the 2010 census

In the last census in 2010, the statistical office of St. Lucia divided the country into eleven districts that were not congruent with the administrative units. The population figures in the table below refer to this census.

After fewer and fewer fish were caught in the years after 1990, fishermen, the tourism industry and environmentalists agreed to set up marine protected areas around St. Lucia. About a third of the coral reef around St. Lucia has been under absolute protection since then. Fishing is prohibited in this area. Neither divers nor bathing tourists are allowed to stay here. In some other areas, protection is relaxed. These areas are open to divers and bathers. Since the establishment of these sanctuaries, the number of fish around St. Lucia has multiplied.

Tourism and the export of agricultural products have the largest share of the economy . The ruins of the sugar mill in the Roseau Valley are now a tourist destination. This shows that the days when “King Sugar” dominated the island's economy are long gone.

In the 1950s and 1960s, the banana replaced sugar cane as the most widely grown agricultural product.

The main export goods today are bananas , flour and rice . Processed goods, machines and food are imported . In the service sector , most of the population (53.6%) were employed, followed by the industrial sector (24.7%) and agriculture (21.7%). The unemployment rate in 2003 was an estimated 20%. In 2012, St. Lucia became the last country in the Eastern Caribbean to introduce a 15% VAT .

The tourism sector is the main industry on the island. It accounts for around half of economic output and is the largest employer. In 2014 the island recorded 338,158 overnight guests and 641,452 cruise guests. In the year 3,622 tourists from Germany visited the island.

Despite the hilly nature of the soil, which appears to be a hindrance to the cultivation of agricultural products, St. Lucia rose to become the largest banana exporter in the northern Antilles . The "Banana Protocol" adopted in the Lomé Convention gave the island a competitive advantage over its competition from Africa . If the agreement were terminated, the island's export economy would be severely affected, as banana exports account for more than half of the economic output of total exports. Lately the cultivation of bananas has been hit hard by increased hurricanes . While 274,543 tons of bananas were exported in 2010, the figure was only 11,343 tons in 2011. St. Lucia's economy is extremely sensitive to natural disasters.

There are nine individual unions in St. Lucia of increasing strength and importance.

Public holidays falling on a Sunday are celebrated on the following Monday.

The capital Castries: The city lies in the middle of a bay framed by the Morne Fortune mountain and the promontory of the Vigie peninsula. Several times in the past, fires raged across the city and houses razed to the ground. That is the reason why there are only a few historical buildings left today.

Derek Walcott Square: In 1992, the central square was renamed Derek Walcott Square in honor of the Lucian Nobel Prize for Literature, Derek Walcott . On the east side of the square is the Cathedral of the Immaculate Conception , built in the 19th century . It has wooden pillars and colorful Caribbean ceiling paintings.

Deux Pitons : The peaks of the Deux Pitons are two old volcanic cores ( Gros Piton 770 m; Petit Piton 743 m). They consist of cooled lava and are the most photographed landmarks on the island. You can climb the peaks with the help of guided hikes.