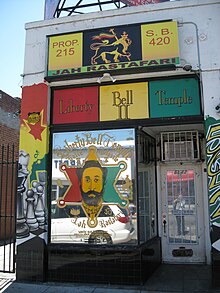 Rastafari (German pronunciation [ ˌʁastaˈfaːʁi ], in Jamaica mostly [ˌɹastafaˈɹaɪ], often abbreviated to Rasta ; also Rastafarianism ) is a belief system that emerged in Jamaica in the 1930s and is widespread worldwide. It originated from Christianity and has many Old Testament references. The movement teaches the divinity of Haile Selassies .

The term Rastafari is derived from the prince name of the Ethiopian Emperor Haile Selassie , namely Lija Ras Täfärí Mäkonnen (ልጅ ራስ ተፈሪ መኰንን). "Ras" means "head" in the Amharic language of Ethiopia and was one of the highest titles at the Ethiopian imperial court. At that time it was only available to the administrators of the largest provinces and was the highest military rank that only the emperor could bestow. Some high dignitaries of the Coptic Church also had the right to use the title of Ras. It was not until the 19th century that the title was used more frequently. A ras had the right to lead 24 ceremonial drums ( negarits ). The meaning of the title is roughly comparable to a duke.

The Rastafari are a typical salvation expectation movement and social movement . Their main features are: the recognition of Haile Selassie as a returned Messiah and living God on earth, the rejection of the western political system (which they call the Babylon system or Babylon and see as corrupt and discriminatory) and the fight for equal rights for the black population. Marcus Garvey , the founder of the Back-to-Africa movement, is related to the founding of the Rastafari movement in Jamaica . Garvey predicted the coronation of a powerful black king in Africa in the 1920s . The coronation of Haile Selassie ( Amharic for “power of the Trinity”) as Emperor of Abyssinia in 1930 was seen as the fulfillment of this prophecy , even if he himself always refused to be the Messiah. Some Rastafaris later dropped the idea of ​​Haile Selassie's divinity and turned to the Christian Ethiopian Orthodox Tewahedo Church .

There are various currents among the Rastafarians, some of which have come together to form so-called "Houses", e.g. B. Nyahbinghi , Bobo Ashanti or the Twelve Tribes ( Twelve Tribes of Israel , founded in 1968 by Vernon Carrington ). Today around 24,000 of the three million Jamaicans profess the Rastafarian faith.

Ethiopian flag at the time of Haile Selassie

They have symbolic meanings for the Rastas:

The colors receive additional symbolism through their use as Pan-African colors since the second half of the 20th century.

The most important sources of the Rastafarian movement are various passages of the Christian Bible , especially the Revelation of John in the New Testament . Some Rastas also appreciate the special books of the Ethiopian Bible and the Kebra Negest . In addition, some texts by the first Rastas, such as The Promised Key by Leonard P. Howell or the Holy Piby by Robert Athlyi Rogers, play an important key role in the development of the Rastafarian movement.

The Rastafari believe that God appeared three times on earth in the form of a human being: the first incarnation in the form of Melchizedek , the second as Jesus Christ and the third and last as Haile Selassie I, who opens the seven seals and that introduces Armageddon (also called Armagideon among Rastas). Haile Selassie is regarded by the Rastas as the return of Jesus Christ announced in the Bible . In contrast to Jews, Christians and Muslims, the Rastas no longer wait for the (possibly renewed) appearance of the Messiah , but see this as fulfilled by the coronation of Haile Selassie. The frequently used expressions “God's chosen” and “Victorious Lion of Judah ” are not, as is often assumed, the coronation titles of Selassies, but part of a creed with which the Ethiopian emperors traditionally introduced their letters.

Another principle is the demand for repatriation, i.e. the return to the African homeland of their ancestors who were brought to America as slaves. In the meantime, the physical return to Africa has been reinterpreted as a “spiritual return”, but some Rastafari have moved to Africa and have founded their own communities there, for example in Shashemene, Ethiopia . However, many Rastafari accept their life in Jamaica or other countries and strive for a “spiritual return” to their African homeland. The aim here is to overcome the cultural rift that arose through the enslavement of their ancestors and to identify positively with their African origins. 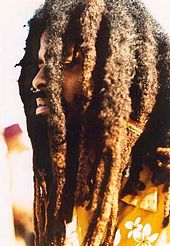 In principle, people are understood as individuals and thus free opinion is also accepted. On the other hand, some groups rely on the strict purity regulations of the Old Testament . There are also patriarchal structures. B. imposed on the woman the duty to cover her head, to look after her husband and to be loyal to him - even if it is not him himself.

Homosexuality is rejected by many Rastafarians with reference to the Bible . The music of some Rastafarian artists has been criticized for homophobic texts, so-called Battyman tunes , since the early 2000s .

Basically the Rastafarians reject alcohol and tobacco and eat without animal products and salt ( I-tal ). They believe that in the beginning of creation man only nourished himself on herbs and fruits. They refer to 1 Mos 1,29  LUT : “And God said: Behold, I have given you all the seed-bearing herbs that are in the whole earth, and every tree on which there is seed-bearing tree fruit: it should be for you Serve food. "

Many of them, but not all, consume cannabis ( ganja ) together in a ritual way , which they use for meditation or for "reasoning", i. H. think about or debate with others, use. Based on the Revelation of John (Apk 22,2 LUT : "[...] and the leaves of the trees serve to heal the peoples"), hemp is also referred to as healing of the nation . It is often consumed with a chalice .

Some Rastafaris wear dreadlocks and untrimmed beards as an expression of their bond with God. The dreadlocks are also a symbol of closeness to nature and are reminiscent of the mane of the Lion of Judah . They were also understood as a symbol of demarcation from the western aesthetics of the “white oppressors” and thus as a sign of resistance. Some Rastafaris have also taken the Nazarite vow, which results in the characteristic dreadlocks and long beards.

Some Rastas refuse to wear body jewelry (piercings and tattoos).

Although the movement originated from the black population, there are also white Rastas. The return to the mother country, which is firmly anchored in the Rastafarian faith - to Ethiopia or Africa in general - can also be seen as a goal for the white Rastafarians, as Ethiopia has long been considered the cradle of humanity; however, older remains of Homo sapiens from Djebel Irhoud in Morocco are now known. A superordinate, comprehensive institution or church that z. B. could establish principles of belief, is absent in the Rastafarian belief, so that the requirements for belonging to the movement are not clearly defined.

The Rastafaris became internationally known from the 1970s onwards mainly through reggae music, for example by Bob Marley , Peter Tosh , Bunny Wailer and Dennis Brown . Also in the popular dancehall reggae there are some musicians who belong to the Rastafarian religion, e.g. B. Capleton . At the same time, however, there are many Rastas, e.g. Until recently, for example, Bobo Ashanti were critical of reggae music or categorically reject it.

Rastas use the term "Jah" (in English pronunciation Jah ) for God , a short form of the Hebrew name of God YHWH .

The Jamaican Rastafari speak the patois common on the island , but with a whole series of Rastafarian-specific words that are not used by other patois speakers. Some of these words are also used in English.

The main feature of these terms is that they were alienated with a mostly capitalized "I", which symbolizes both the English word "I" and the number "one" of the Roman number system , which appears in the title Haile Selassies. The Rastafarian-specific language is called "Iyaric" by Rastafarians themselves.

Well-known examples are “I and I” for “I” and “we”. By avoiding the expression “you” (ie “me and you”), the unity of the individual individuals with one another and with God should be expressed.

Many words or parts of words have also been replaced by their opposite. The most striking example is the word "to understand" - which was replaced by the Rastafarians by "to overstand", as they see the original word as an atavism from slavery and therefore perceive it as degrading. Another example is the word “cigarette”, which in English can be understood as “see-garette”. Since tobacco smoking is considered negative and the view is cloudy, “blindgarette” is used instead. Words are also changed in such a way that they reveal their “true character”. “Television” becomes “tell-lie-vision” or “Israelite” becomes “His-real-light”.

There is no regular spelling for these terms, so different spellings are used.