This article is about the mango plant; for further meanings see Mango (disambiguation)

The Mango ( Mangifera indica ) is a species of the genus Mangos ( Mangifera ) within the Sumac family (Anacardiaceae). It is widely cultivated, provides fruit and oil, and is used as a medicinal plant.

Other mangifera species such as the fragrant mango or the smelly mango and Mangifera caesia are also cultivated in Asia, but they are little known outside of Asia.

Seeds in an opened mango core

Young fruits on the tree

The evergreen and fast-growing mango tree can (in individual cases) reach heights of up to over 35 meters and a corresponding, sweeping and rounded treetop with a diameter of up to 30 meters. It forms deep tap roots. The bark is initially light green, but older trees form a thick, gray-brown bark that has longitudinal cracks and later falls off in rectangular scales. Often traces of a white, rubbery juice appear in the cracks.

The mango tree is quite long-lived and can bear fruit for more than 300 years.

The simple, somewhat stiff and waxy, shiny, leathery, bare and pointed to acuminate leaves are elongated, lanceolate to eilanceolate with a whole, sometimes wavy edge. The spirally or whorled leaves are up to 30 cm long and 7 cm wide. The veins are pinnate with a light green central rib. The light green petiole is thickened at the base ( pulvinus ) and about 2–8 cm long. What is noticeable here is the renewal of leaves, which is referred to as "leaf shedding". Between the old, dark green foliage, individual twigs with fresh, light foliage (shaken leaves) stand out, the new leaves initially hang limply and are initially reddish, salmon-colored, but soon become dark green on the obverse and lighter on the underside.

In terminal or axillary, large, about 20–35 cm or more, long and richly branched panicle , pyramidal inflorescences are very many (up to 6000) short-stalked flowers. The inflorescence stalks are greenish to reddish. Male or hermaphrodite flowers are formed in mixed proportions in the inflorescences. The relatively small, white-yellowish to pink or reddish-colored flowers smell of lilies when they open . The pointed to round-pointed, more or less hairy sepals are greenish and egg-shaped. The flowers have a large, green-whitish, fleshy and multi-lobed disc and, in addition to the one or two fertile stamens, there are also shorter staminodes. The upper ovary of the hermaphrodite flowers is spherical with an offset stylus, in the male it is stunted. After the flowers have wilted, it takes another three to six months for the fruits to ripen.

Pollination is carried out by the wind or by insects (flies, bees, fringed wings, etc.).

The ripe, up to 20 cm long and 6–8 cm wide, irregularly egg-shaped to pear-shaped, sometimes beak-pointed mango fruit hangs from a long stem on the tree and weighs up to two kilograms. The fruits can appear individually or in groups. The stone fruit has a thin, smooth, waxy-leathery skin, including a yellow-orange pulp that is soft to sometimes fibrous, depending on the degree of ripeness, which surrounds a large, flattened, whitish, woody-fibrous and hairy stone core in which the slightly smaller one is located , flat and brownish seeds are located. The stone core adheres well to the pulp and is difficult to remove. The color of the fruit ranges from green to yellow to red, and a combination of all three colors is often found. The peeled fruit has a strongly aromatic, sweet fragrance and taste. The seeds have a thin, papery seed coat and tegmen. The seeds are mono- or polyembryonic and they are not resistant to dehydration (“recalcitrant”; unorthodox), so they cannot be stored for long. 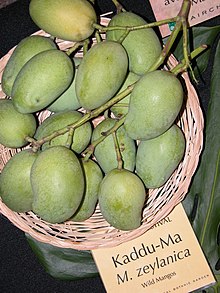 Mangifera indica comes from the area between the Indian Assam and Myanmar ("Indian Mango") or from Borneo (today Filipino Mango ) and is at home in the tropical rainforest . Today it occurs as a cultivated plant in large parts of the world, including in the USA , Mexico and other countries in Central and South America , in the Caribbean , in the tropical belt of Africa (e.g. in Kenya and on the Ivory Coast ), in large parts of Asia (e.g. in Thailand , the Philippines and Pakistan , the third largest exporter in the world) and also in Australia . India is still the main producer of mango fruits with an annual production of 10 to 15 million tons. In Europe , the trees are mainly cultivated in Spain , especially on the Costa del Sol and on the Canary Islands .

It is difficult to grow, but it is becoming increasingly popular among amateur gardeners. As indoor or terrace plants in cooler climates, mango trees usually do not bear fruit, as most species require constant high temperatures and humidity, which cannot be achieved in a normal indoor climate in apartments.

The Indian mango tree provides larger fruits, but is sensitive to large amounts of water. The Filipino mango is used to excess water, but needs significant amounts of light.

On May 1, 2014, a temporary import ban on mango fruits from India came into force in the European Union. The background to this was the fact that non-European fruit flies were repeatedly found in earlier mango deliveries . The responsible European authorities see these insects as a biological threat, as there are fears that they could also spread in Europe.

According to the Food and Agriculture Organization FAO, 55,383,788 t of mangoes, mangosteen and guavas were harvested worldwide in 2018.

The following table gives an overview of the ten largest producers of mangoes, mangosteen and guavas worldwide, who produced a total of 66.8% of the harvest.

The milky sap in the bark and leaves is irritating to the skin and can cause "mango dermatitis ", hives or cheilitis . The irritation similar to that by which the "paint disease" Chinese lacquer caused the juice from the wound, lacquer tree is prepared, a different Sumachgewächses. Other sumac plants such as the climbing poison sumac u. a. contain similar urushiols in their milky sap , which are responsible for the strong irritation. This similarity to the allergens of the Toxicodendron species makes the frequency of cross-allergies understandable. The peel of unripe fruits also contains small amounts of urushiole.

Often, exposure to handling occurs during the picking of the mangoes, when juice dripping or splashing from the tear-off sites, stem ends contaminates them. There is a particular risk if the contaminated mangoes are then sucked out unpeeled. In the countries where fresh fruits are harvested, there is often masses of pronounced perioral (around the mouth) irritation (in Australia also called “mango rash”). The allergenic compounds in the fruit peel can cause sensitization or trigger a reaction in people who are already sensitized. However, peeled fruits are free from these substances and can therefore also be safely eaten by Toxicodendron allergy sufferers.

Also when processing the wood (wood sap, sawdust), through contact with injured, broken branches, if z. B. Climbing trees or smoke from burning plants can cause irritation.

Gradients in mango fruits in a supermarket in Florencia, Colombia

Mangoes are counted as fruit . There are now over 1000 types of mango that differ in shape, size and taste. The fruits are processed into juice, compotes , jam and ice cream and are also used in chutneys and pickles . Mangoes have been offered regularly in Europe for a number of years, although they are sensitive to pressure and are therefore difficult to handle for the trade. The ripeness of a fruit can be recognized by the fact that it is fragrant and that it gives way slightly when pressed. Mangoes are fully ripe when one to four millimeters large black dots can be seen on the fruit.

Among other things, the anti-inflammatory , anti- diabetic and anti-viral properties of the mango are discussed. They are also supposed to calm the intestines because they are easy to digest and low in acid. In India, they are credited with the ability to stop bleeding and strengthen the heart . Due to the high content of vitamin C , mangoes can be used as a preventative against infections and colds.

Use as an oil plant

A vegetable fat is obtained from the seeds of the mango fruits , which is similar in its properties to cocoa butter . It is used to make chocolate and margarine , but also to make skin creams, shampoo and other cosmetics.

In Timor , the leaves of the mango are used to dye traditional woven fabrics ( tais ), resulting in shades of green.

It is mentioned as “food of the gods” in the Hindu Vedas dating from around 1200 BC. Were written. Even today it is offered to the gods as a sign of wealth and divine sweetness.

The word mango is of Dravidian origin (cf. Tamil māṅkāy, Malayalam māṅṅa, "unripe mango"). The fruit reached Europe with the Portuguese travelers to India in the 16th century. The first mention in a European language dates back to 1510 and can be found (in the form of manga ) in the travelogue Itinerario de Ludovico de Varthema Bolognese by the Italian Ludovico de Varthema .

In China, under the dictatorship of Mao Zedong, there was a unique "mango cult". This was brought about by Pakistan's Foreign Minister Mian Arshad , who in 1968 brought a box of mangoes as a gift. Mao had this in turn distributed to loyal working groups who did not know the fruit and who are said to have screamed enthusiastically and sang with wild passion while looking at the fruit, because it was a gift from the great leader ( personality cult ). As a result, there were a number of bizarre excesses of the "mango cult": The original mangoes are said to have been preserved in formaldehyde in order to preserve them for posterity. A large number of propaganda articles were created ( enamel dishes and wash bowls with a mango print, brooches with mango reliefs, mango dressing tables, soap with a mango scent, mango cigarettes and bed linen with mango pictures). A doctor is said to have been executed for a disparaging comparison of a mango with a sweet potato .

The mango is no longer included in the Red List of Endangered Species by the International Union for Conservation of Nature "IUCN" . After it was listed as “Vulnerable” in 1997, it has been listed since 1998 as a species for which insufficient data (“Data Deficient”) are available for a hazard classification.