A medicinal plant is a useful plant that is used for medicinal purposes or as a medicinal plant to alleviate diseases internally or externally. It can be used as a raw material for phytopharmaceuticals in various forms, but also for tea preparations , bath additives and cosmetics .

The term medicinal herb is also common for herbaceous medicinal plants . Many medicinal plants are also poisonous , depending on the concentration of the active ingredients in the plant. Plants with a strong smell and bitter taste in particular have been regarded as effective medicinal plants from the earliest times.

In medicinal plant science (phytopharmacognosy) one differentiates between the following terms:

"Medicinal plant" is a functional term that is only used according to the purpose , regardless of the botanical affiliation or the habit . Every plant for which pharmaceutical biology is known to be used as a drug can be called a medicinal plant. Occasionally, mushrooms, lichens and algae are also counted among the medicinal plants.

There are many forms of drugs from medicinal plants: fresh or dried parts, extracts (with solvent), decoctions (obtained by cooking), maceration (obtained by cold infusion), etc. Originally, the drying in the foreground: The word drug probably derives from Dutch droog "Dry".

Since the medicinal effects of plants also affect animals, such as B. apes , sheep , blue tits and monarch butterflies used instinctively medicinal plants should already at the early representatives of Homo genus have found application.

The man from the Tisenjoch , commonly known as Ötzi , an approximately 5300 year old glacier mummy from the late Neolithic (Neolithic) or the Copper Age (Eneolithic, Chalcolithic), probably brought birch pores with him as a remedy.

All of the tribes of hunters and gatherers discovered and researched or at least described in the last 200 years also use plants for healing in the case of medical problems.

The use of plants with the intention of healing can already be proven in the earliest layers of Babylonian , ancient Egyptian , Indian (hymns of the Rig Veda ) or Chinese texts, but also the express cultivation of medicinal herbs. The best-known evidence of these oldest records of medical efforts with numerous examples of medicinal plants and their use is the Ebers papyrus , which was published in the 16th century BC. Was written in Egypt.

Aristotle (* 384 BC; † 322 BC) and Theophrast (* around 371 BC; † around 287 BC) described medicinal plant applications, and the Hippocrats also listed the therapeutic properties of plants.

In the 1st century, the Greek Dioscurides described numerous medicinal plants and their uses as well as one of the oldest related texts on the collection and storage of medicinal plants. As is still valid today, roots and rhizomes should be in autumn (after all growth processes have been completed), leaves and branch tips before fruit and seeds begin to ripen (when the photosynthesis rate has reached its optimum), flowers shortly before or at the time of pollination, fruits shortly before or after the ripening process and seeds are harvested when they are mature but not yet precipitated. Before that, Diocles of Karystus (4th century BC) and Krateuas (1st century BC) wrote comparable works ( herbal books ). In contrast to the (natural) philosophical considerations of Aristotle, for example, Dioscurides emphasized the use and the exact description of plants, among other things , in his Materia medica, which was written around the year 60 and is the first to survive with around 512 manuscripts Occidental treatise on medicinal plants.

Garden of the Murbach monastery in Alsace

During the Middle Ages, the cultivation took place (see the land estate ordinance of Charlemagne ), the description and use of medicinal plants mainly by monastic monks (see monastery medicine ). The connection between food and medicine was recognized early on, especially in oriental healing arts, and accordingly numerous references can be found in the medicine books of the Orient, for example in Ibn Sina ( Avicenna ) around 1000 AD. The Spanish-Arab doctor and botanist Abu Muhammad Ibn al-Baitar described over 1400 herbal remedies and their recipes in the Kitab al-gami around 1230 .

Paracelsus (1493–1541) recognized: “All things are poison and nothing without poison; the dose alone means that a thing is not poison. ” In 1543, Leonhard Fuchs published the New Kreueter book, one of the most important herbal books in German, which depicts numerous medicinal plants and describes their effects.

The books by the Swiss “herbal priest” Johann Künzle (1857–1945) are among the pioneers of modern phytotherapy . Rudolf Fritz Weiss (1895–1991) is considered the founder of scientific herbal medicine. 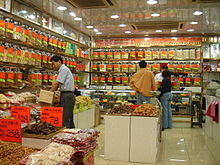 Today medicinal plants are used in phytotherapy, in some European countries and the USA they only play a minor role due to the emergence of chemically synthesized and defined active ingredients . On the other hand, the pharmaceutical industry and pharmacology have come to the conclusion that the variety of secondary plant substances represents an enormous reservoir for new, highly potent drugs . The flora of the tropical rain forests, which has hardly been researched and cataloged, and the plants used in traditional Chinese medicine (TCM) and Indian medicine Ayurveda hold great potential in this regard.

Medicinal plants for pharmaceutical needs in pharmacies are grown under conditions that are as controlled as possible. They are also collected in the wild or planted in the home garden to be used as home remedies as a preventive measure or in the event of illness. The most common form of use is probably the medicinal tea .

Medicinal plants are also counted among the renewable raw materials , as their use takes place outside the food and feed sector. Together with dye plants , the area under cultivation in Germany is around 12,000 hectares (approx. 0.5% of the total area under cultivation for renewable raw materials). About 90% of the medicinal plants used in Germany are imported. However, only 30% of medicinal plants come from cultivation and around 70% from wild collections. Of the approximately 440 domestic medicinal plants, around 75 species are grown in Germany, with 24 species alone accounting for 92% of the supply. The main cultivation areas in Germany are Thuringia (Erfurt Basin), Bavaria (Upper Bavaria, Erdinger Moos, Middle Franconia), Saxony (loess areas in Central Saxony), Saxony-Anhalt (Central German dry area) and East Frisia.

Cardiac glycosides are obtained from the red foxglove ( Digitalis purpurea )

Genuine comfrey ( Symphytum officinale ), as the name suggests, was used in the past, among other things, for bone fractures

The witch hazel ( Hamamelis ) has a hemostatic effect, among other things

A whole range of effective drugs comes from plants or has been further developed from plant substances. These plant ingredients, which have been carefully examined and shown as pure substances, are used by medicine because their medicinal effectiveness has been proven. The plant kingdom has extremely strong poisons, which are used in appropriate dilutions and partly as chemically refined substances, especially for heart problems and as narcotics in evidence-based medicine . Examples are the red foxglove with its cardiac glycosides and the opium poppy or its opiates . To a large extent, plants are also used as supportive therapeutic agents.

Medicinal plants usually contain a large number of substances that can have different, even opposing, effects. Another disadvantage compared to synthetically produced drugs is that the active ingredient content is difficult to standardize due to climatic, regional and processing-related circumstances. There are sometimes strong fluctuations in dose and galenics between different manufacturers and also between individual batches of a product . Drugs that are available in pharmacies must, however, comply with the strict regulations of the respective state pharmacopoeia (e.g. German Pharmacopoeia ). Your content of active ingredients is therefore guaranteed.

Some traditional medicinal plants are e.g. B. has been deleted from the pharmacopoeia because of recognized serious side effects . Many are ineffective, others work, but are superseded by more effective synthetic drugs. In some cases, the herbal variant can be used if there is an individual intolerance to the synthetic drug. The effectiveness of many medicinal plants has not yet been investigated because there is no commercial interest or the state and / or pharmaceutical companies have not provided appropriate research funds.

In the years from 1984 to 1994, Commission E of the Federal Health Office compiled scientific and empirical material on the desired and undesired effects of herbal medicinal products in monographs. At the European level this work since 2004 by the Committee on Herbal Medicinal Products (Committee on Herbal Medicinal Products, HMPC) of the European Medicines Agency continued European Medicines Agency (EMA). There are also at international level and not legally binding, the monographs of the European Scientific Cooperative on Phytotherapy (short ESCOP since 1989) and the World Health Organization (World Health Organization, WHO).

There are also numerous other terms, such as stramentum ( straw ), balsamum ( balsam ), pseudofructus, etc. The pharmaceutical names are sometimes somewhat imprecise from a plant morphological point of view, such as rhizome for rhizome.

Even today, numerous medicinal substances are produced directly from plants or at least synthesized in a nature-identical manner (with the same chemical structure as the active substance found in plants). Some of these are highly effective or, in non-medical applications, highly toxic substances. The plant ingredients that are used as isolated individual substances include, for example, colchicine , paclitaxel and morphine .

In 2010 a petition was sent to the German Bundestag against an allegedly threatened ban on medicinal plants in the EU. It was a misunderstanding. The corresponding guideline THMPD (Traditional Herbal Medical Product Directive) was already passed in 2004 and contains approval rules for natural remedies, which should enable a simple registration process. It does not apply to alternative therapies and does not prohibit any plants or substances. In April 2011, false reports were again spread on the Internet about an allegedly threatened ban.

In August 2013, initiators who were initially unknown, with reference to EU regulation 1924/2006 / CE, called for the signing of a petition addressed to the European Parliament “Basic right to health” and again conveyed the impression that natural remedies were threatened . However, the regulation had been in force since 2006. It also only affects food and no natural remedies or other medicines. The Carstens Foundation (support group for nature and medicine) and the Hufelandgesellschaft (umbrella association of medical associations for naturopathy and complementary medicine) reacted with corrections and criticism of the action. The Hufelandgesellschaft condemned the appeal as "manipulative" and as an abuse of interest in natural remedies.