This article deals with the species basil, for the genus of the same name see basil (genus) .

The basil ( Ocimum basilicum ), including basil , basil or kingsfoil called, is a spice plant from the same genus basil ( Ocimum ) in the family of mint .

The different forms of culture differ in leaf color, size, aroma, type of growth and requirements. In the temperate latitudes, basil is mostly grown as an annual plant . It is an upright, annual to perennial herbaceous plant that reaches heights of 20 to 60 centimeters. All parts of the plant smell aromatic. Stems , bracts and often the leaves are hairy ( indument ). The cross-opposed leaves are divided into a petiole and a leaf blade. The short petioles are 5 to 20 millimeters long. The simple leaf blade is often egg-shaped with a length of 1.5 to 5 centimeters and a width of 0.8 to 3.2 centimeters. The leaf margin is smooth. 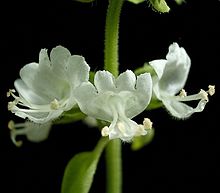 Zygomorphic flowers with the four stamens

The hermaphrodite flower is zygomorphic and five-fold with a double flower envelope . The five sepals are fused bell-shaped and have the same color as the leaves. The calyx is 1.5 to 3 millimeters long during the anthesis and enlarges to about 9 millimeters by the time the fruit is ripe. The five petals are fused to form an 8 to 9 millimeter long crown. The corolla tube has a length of about 3 millimeters. The broad, more or less flat upper lip is four-lobed, about 3 millimeters long and about 4.5 millimeters wide. The lower lip is about 6 millimeters. There are two unequal pairs of stamens that are fused with the crown, but are free from each other. The dust bags open with a longitudinal slit. The ovary is on top. The stylus ends in a two-lobed scar.

The fruit is 1.5 to 2 millimeters long and enveloped by the enlarged calyx.

The content and composition of the essential oil vary greatly depending on the variety, origin and harvest time. The content varies between 0.04 and 0.70%, whereby the German Pharmacopoeia prescribes a minimum content of 0.4% (based on the dry matter). The most important components of the essential oil are linalool with up to 85%, estragole with up to 90% and eugenol with up to 20%. It also contains other monoterpenes such as ocimen and cineole , sesquiterpenes and phenylpropanes such as chavicol . In addition to essential oil, it also contains tannins, flavonoids, caffeic acid and esculoside in significant quantities. The Federal Institute for Risk Assessment warns against the methyleugenol contained in basil , which is considered carcinogenic in high doses.

The natural range of the basil includes the tropical and subtropical Asia.

The species name Ocimum basilicum was first published in 1753 by Carl von Linné in Species Plantarum .

Basil is divided into two subspecies, there are also other subdivisions into different varieties:

There are several varieties (selection): 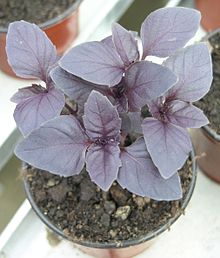 There are a number of varieties that differ in size, leaf shape, leaf color and fragrance. 'Opal' is a red-leaved variety. Commonly grown varieties are 'Großer Grünes', 'Genoveser' and 'Opal'. The 'Cinnamon' variety has a cinnamon-like scent and is also called cinnamon basil. The variety 'Lemon' or lemon basil has a lemon-thyme-like scent.

Ocimum basilicum var. Thyrsiflora is known as Thai basil , but lemon basil and Indian basil are also called that.

Bush or dwarf basil is an ornamental form only 15 cm high.

The specific epithet basilicum goes back to the Greek word for royal and indicates that the basil was regarded as a royal spice. Other German names for basil are basil herb, Königskraut, Josefskraut, soup basil, Braunsilge and German pepper. For the genus name, which goes back to the Greco-Latin plant name ocimum (for Ocimum basilicum ; Greek ὣκιμμονν), see basil (genus) .

The origin of the basil can no longer be determined today. Northwest India is assumed to be the region of origin. In the Middle East, basil was already around 1000 BC. Cultivated as a spice, medicinal and ornamental plant. Finds in pyramids show cultivation in Egypt already in ancient times. The name is Latinized from the Greek , in Greece there are still numerous folk tales about basil and its origin. In addition to the Greek basil, traditionally it is also widely used in Italian cuisine .

The basil probably came to Germany in the 12th century AD.

Most of the cultivation takes place in subtropical areas, but also in the tropics and temperate latitudes. Basil is grown outdoors as well as in a greenhouse . It is grown in pots and bundles. In the open ground , basil needs loose, water-permeable, well-warming soil . The soil pH value is optimally between 6.5 and 7.2. Basil is a plant that needs warmth, there is practically no growth below 12 ° C, but the fungal attack increases significantly. In Germany, outdoor produce comes onto the market between around the end of June and the beginning of October, and greenhouse produce all year round. There are no special regulations for sorting or packaging. Bundles are often 30 to 40 g heavy bundles packed in foil. Pottery is mainly grown in the greenhouse . The culture lasts between 40 days in summer and 80 to 100 days in winter. But it can also be kept well as a potted plant. 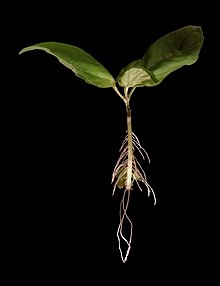 Cut off shoot with developed roots

Cut shoots that are placed in water form new roots after a few weeks. In this way, basil can also be propagated cheaply and without great effort in private households. Basil can be grown outside without any problems from an outside temperature of 12 ° C. With appropriate light, whereby partial shade is preferred in summer, the plant grows herbaceous and is also much more stable than basil as a potted plant in the building. The basil, which is available in retail stores, is a young plant grown in a greenhouse , which is distributed very densely and tightly in a plastic pot with strong roots and is not intended as a houseplant . This basil is only suitable for quick consumption and is weakened during transport due to insufficient light conditions, few nutrients and low temperatures. Therefore, the plants should be repotted individually and with sufficient space for intensive rooting in a new planter, where they can only develop their robustness outdoors. In addition to planting out entire plants, basil can also be sown or grown by forming roots in a container filled with water.

Most important viral disease is transmitted by aphids alfalfa ( alfalfa mosaic virus triggers), the leaf yellowing. Among the fungal diseases, leaf spot disease (triggered by Septoria species) comes first, which occurs during periods of rain. In addition, the Fusarium wilt ( Fusarium oxysporum ) is important in the field as well as in the greenhouse . Of animal pests, those that feed on the leaves are of importance: dwarf cicadas , caterpillars of the horned owl ( Acronycta rumicis ), common meadow bugs ( Lygus pratensis ) and snails. Weak plants can suffer from severe aphid infestation, which particularly affects the young shoots.

The fresh and dried leaves are used as a kitchen spice. Basil is one of the most commonly used spices in southern European, especially Italian, cuisine. However, the aroma is lost during drying. Basil is also used in the meat canning industry. Basil macerate and distillate are part of some herbal liqueurs. The essential oil is used in the cosmetics industry for fragrance mixtures. The fine aroma of the leaves goes well with tomatoes. Basil is almost always a component of pesto and essential for traditional Neapolitan pizza .

Basil seeds, similar to Mexican chia , are used in some fashion drinks.

Basil has been used in medicine since ancient times . The plant was used to treat headaches and tear fistulas.

The pharmaceutical drug is called Basilici herba (Latin: the basil herb ). Basil is used in folk medicine , especially in the Mediterranean region, for loss of appetite ( stomachicum ), for flatulence and bloating ( carminative ) and less often as a diuretic , lactagogue and for gargling for sore throats.

There are no known side effects when taking therapeutic doses, but because of the estragole content, medicinal use is not considered acceptable. The Federal Institute for Risk Assessment presented in 2002 established in animal studies that estragole and carcinogenic effects in in vitro and in vivo studies genotoxic effects show the data situation for a final scientific assessment is inadequate. The Commission E came to the following assessment: As the efficacy has not been established in the claimed applications and due to the risks a therapeutic application can not be represented. There are no concerns about the use as an odor and taste corrector up to 5% in preparations.