Interior view of a greenhouse

In the Temperate House

The Royal Botanic Gardens, Kew (Kew Gardens) are an extensive park area with important greenhouses ; they are located between Richmond upon Thames and Kew in south-west London and are among the oldest botanical gardens in the world. There are many plants to be seen there that are not native to Europe or the northern hemisphere. In addition to the world-famous Victorian greenhouses, there are also large parks with very old rhododendrons in Kew Gardens . The number of visitors today is 1 to 2 million per year. More recently, Kew Gardens has also devoted itself intensively to environmental education, research and nature conservation goals . 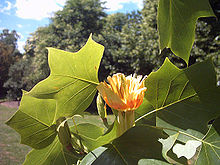 Blossom of the Liriodendron tulipifera tulip tree in Kew Gardens

The Royal Botanic Gardens in Kew owe their origins to the exotic gardens that Henry Capel, Baron Capel of Tewkesbury (1638–1696) created near Kew. They were significantly expanded by Princess Augusta of Saxe-Gotha-Altenburg , widow of Friedrich Ludwig , the Prince of Wales. The gardens were pleasure gardens; under Augusta they also served as botanical gardens for the first time from 1759 . This work was done by William Chambers ; a Chinese pagoda built by him in 1762 still stands today. King George III hired William Aiton and Joseph Banks to further develop the gardens.

One of the garden's botanists, David Nelson , accompanied James Cook and William Bligh to the Pacific .

In 1840 the gardens were rededicated as a national botanical garden and again significantly expanded. As a result, the herbarium and a library were also built . On July 3, 2003, the Royal Botanic Gardens were added to the UNESCO World Heritage List .

Plan of Kew Gardens, location of the greenhouses

According to plans by the English architect Decimus Burton , several greenhouses were built in Kew Gardens in the 19th century.

The Palm House (tropical house) built between 1841 and 1849 is the oldest surviving Victorian greenhouse. It is home to palm trees and other plant species from the humid tropics from Africa, America, Asia, Australia and the Pacific region and is very well visited throughout. The aquariums in the basement, where exotic fish and other aquatic life can be observed, are worth seeing in the Palm House.

The Temperate House ⊙ (German: House of the temperate climates ), built from 1859 to 1863, is 4880 m² and around twice as large as the Palm House and is therefore the largest of the greenhouses in Kew. Plants from South Africa, Australia, America, New Zealand, Asia and Lord Howe Island grow there , and among other things, with a 16 m high honey palm (Jubaea chilensis) grown from a seed, the tallest palm in the world that can be grown in a greenhouse. The bread palm fern Encephalartos woodii, native to Africa, is considered the rarest species of the Temperate House . After the building was closed for renovations for a period of five years, it reopened in early May 2018.

The third large greenhouse is the Princess of Wales Conservatory . It was opened by Princess Diana in 1987 in memory of the garden's founder, Princess Augusta . It is home to plants from all ten tropical climates , from deserts to the ever-humid rainforests. Important tropical crops, orchids and carnivorous plants are united under its roof. Special attractions are the titan arum (Amorphophallus titanum) with the world's largest flower and another basin with Amazon water lilies.

There are also several smaller greenhouses:

The Waterlily House (German: Seerosenhaus), built in 1852, houses the large Amazon water lily ( Victoria amazonica ) named after the English queen and other tropical aquatic plants and is only accessible in summer.

In the southeast of the park is the Davies Alpine House , which opened in 2006 . It offers plants in the high mountains optimal growth conditions.

The small lake in Kew Gardens, like almost all of the landscaping in the gardens, is artificially created. It offers a habitat and breeding ground for many different, also unusual, water bird species and is particularly worth seeing during the mating and nesting season.

The small country house owes its name to its first owner, Queen Charlotte , the wife of King George III . The cottage was a wedding present for Charlotte and was used by the Royal Family as a picnic cottage, but never as a home. The interior is open to visitors on certain days.

Kew Palace is the only one of the former three royal palaces that still stands today. The palace, built in 1631, was owned by King George II . bought as a kind of kindergarten.

The only king who himself lived in the old Kew Palace, the "White House", was George III. This house was partially demolished in 1802. In 1811, when George III. Mentally ill and blind, he moved to the Palace of Windsor Castle and stayed there until his death in 1820.

Because of its Flemish appearance, the palace is called the Dutch House (Dutch House). After ten years of renovation, the palace was reopened to the public on April 27, 2006. The cost of restoring the house in the style of the early 18th century amounted to the equivalent of 9.6 million euros. Queen Elizabeth II celebrated her 80th birthday on the evening of April 21, 2006 with close family members in the newly restored Kew Palace. Behind the building is Queen's Garden , an herb garden that grows medicinal herbs that were used in the 17th century.

The Chokushi-Mon ("The Gate of the Imperial Envoy") is a scaled-down replica of the Karamon ("Chinese Gate"), the main entrance of the Nishi Hongan-ji in Kyoto . It was built in 1910 for the British-Japanese Exhibition in London, then dismantled and rebuilt in Kew Gardens. The gate was built in the style of the Azuchi Momoyama period (late 16th century). The gate made of wood contains a lot of hand-carved parts. These mainly represent flowers and animals, but also an old Chinese legend.

The Chokushi-Mon is surrounded by a Japanese rock garden in the style of the 16th century. This consists of three parts, the “Garden of Peace”, the “Garden of Activity” and the “Garden of Harmony”, in which various aspects of Japanese gardens are represented. 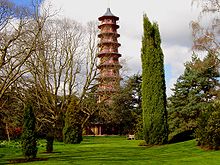 In the southeast of Kew Gardens is the brick pagoda ( The Chinese Pagoda ), built in 1762 based on plans by William Chambers and based on a Chinese model . The building is almost 50 meters high and has a maximum diameter of 15 meters at the bottom. Visitors can climb the pagoda via a staircase with 253 steps. Although Chambers had made his own sketches of pagodas during a trip to China , the pagoda is believed to be inspired by Johan Nieuhof's depictions of the Nanjing Porcelain Pagoda .

About 120 different species grow in Kew's bamboo gardens. In the center of this complex is a small, traditional Japanese house. Around the house, between the plantings, there are some things made of bamboo, such as a greyhound and a xylophone .

Next to the tropical house is a row of ten statues with heraldic animals. They are known as the Queen's Beasts (German: Animals of the Queen). They were originally created for the coronation of Queen Elizabeth II in 1953, the statues currently on display are replicas in Portland stone . The animals are: the lion of England , the griffin of King Edward III. , the Hawk of House Plantagenet , the black bull of Clarence, the white lion of Mortimer, the Yale of Beaufort, the white greyhound of Richmond, the red dragon of Wales , the unicorn of Scotland and the white horse of Hanover .

There is a small museum near the tropical house, Museum No. 1, which shows the permanent exhibition Plants and People (German: plants and people). This shows how mankind has made use of plants.

A second permanent exhibition in the Marianne North Gallery shows pictures by this artist, who has traveled a lot and has painted almost exclusively nature pictures. The special thing about the exhibition is that the building was erected exclusively for this purpose and the pictures are displayed in a “Victorian” way, which means that they adorn the walls without gaps, frame to frame.

In addition to these two permanent exhibitions, there are changing exhibitions of various works of art, mostly sculptures, outdoors and in the glass houses.

Scattered over the entire park area you will find systems in which certain plants are grown. Among other things, behind the tropical house is a rose garden that was laid out in 1923 and in which over ten different types of roses are cultivated. In the vicinity of the bamboo gardens there is a large plantation of rhododendrons , the Rhododendron Dell, which contains over 700 different specimens. There is also a holly avenue (English: Holly Walk). This is more than a kilometer long and consists of fully grown holly , most of which are over 135 years old.

Other thematic planting is the azalea garden (English Azalea Garden), the lilac garden (Lilac Garden), are cultured in the 105 species and the Color Spectrum (German: color spectrum), in which each color of the rainbow is represented by various plants. The Mediterrean Garden (Mediterranean garden) is mainly home to shrubs and herbs from the Mediterranean region . The Waterlily Pond , in which various pond plants bloom in spring , is surrounded by Woodland Glade, where sequoia trees grow alongside other conifer species .

In the water lily house

Kew, as the gardens are called among botanists today, has an extensive seed bank . Together with the Herbarium of Harvard University and the Australian National Herbarium , Kew is working on the IPNI database , by means of which binding plant names are determined and made available.

As usual in botanical gardens, the plants in Kew Gardens are provided with information labels. These contain the commonly used English name of the plant, the botanical name and, if the plant was imported, the place of origin. Information sheets on specific plants, projects or structures in the Royal Botanic Gardens are available, and most are also available online.

In the themed playground, Climbers and Creepers, children learn how plants feed and multiply. You can experience the plant world from the perspective of insects in and on oversized plant models. The models are interactive and react to movement and the like.

The worldwide fame of the English Kew Gardens led, among other things, to the fact that in the second half of the 19th century an entrepreneur in Toronto, Canada named his amusement and recreation park on Lake Ontario The Canadian Kew Gardens . These parks still exist in a slightly modified form, since they were acquired by the city council in 1907 as the public park at Kew Gardens .