The lighting climate zones of the earth: from above / below to the middle: polar zones, medium widths, tropical zones

The lighting climate zones, also known as astronomical, mathematical or solar climate zones, are based on the knowledge that the climate primarily depends on different levels of solar radiation. The angle (Greek: klíma inclination) and thus the intensity of solar radiation and its seasonal course depend only on the geographical latitude if atmospheric influences are neglected .

The division of the earth into lighting climate zones is carried out astronomically precisely at the tropic and polar circles. This creates the astronomical tropics (Greek tropē turning) up to 23 ° 26 ′ latitude, the central latitudes up to 66 ° 34 ′ and the polar zones (Greek pólos axis). Within the astronomical tropics, the sun is at its zenith twice a year and always reaches a midday height of at least 43 °. In the polar zones, the sun is below the horizon at noon during the polar nights , whereas it is even above the horizon at midnight during the polar days ; it never reaches a midday altitude greater than 47 °. The radiated energy is correspondingly different.

Modern climatology divides the solar median latitudes once again at the 45th degree of latitude with regard to the real conditions on the earth's surface . Half of the lower latitudes are called subtropics, those of the high latitudes are called medium latitudes. The earth's surface is divided into four almost equally wide belts from the equator to the pole by the resulting four climatic zones. Between them, the solar radiation at the upper limit of the atmosphere differs, in addition to a decrease in the annual total from the equator to the poles, especially qualitatively: 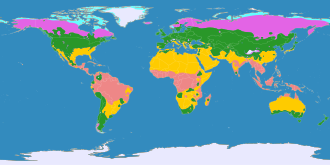 The actual conditions on the ground are characterized by the physical climatic zones. For them, the stipulation applies in particular that the width specifications of the lighting climate zones are only to be adopted approximately, so that the exact limits can be determined locally on the basis of other criteria. In addition, the irradiated areas must be taken into account. There are further differences here: B. in the radiation balance , i.e. the difference between radiated and radiated energy. On the earth's surface, the differences are even more pronounced due to the influence of the atmosphere:

These balance differences are balanced out by heat transport, which essentially determines the weather. The planetary circulation is created , which is also arranged zonally and has corresponding climatic effects.

Climatic zones of the climatic classifications

Climate classifications define climate types according to climate factors or climate elements. It is desirable that the climatic regions resulting from these climatic types are compatible with the solar climatic zones. For example, the climate zones can then be further subdivided, e.g. B. in cold tropics and warm tropics , arid and humid types. Since the climate classifications are supposed to meet many other requirements, such as extensive correspondence with vegetation and ecological zones , this is a nontrivial requirement.

The physical climate zones in detail

The tropics lie around the equator between the tropics. The day length is between 10.5 and 13.5 hours. The seasons have no thermal characteristics. There is a time-of-day climate: the daily temperature fluctuations are greater than the annual ones. In addition to the warm tropics, there are also cold tropics in mountain regions, which are distinguished from other mountain climates by their constant seasonal conditions. The precipitation-determining phenomenon in the tropics is the trade fair circulation and its seasonal shift. The Passatz circulation causes the constant so-called zenital precipitation around its convergence zone . The convergence zone can almost stand still - in the Pacific and Atlantic - or move cyclically once over the entire tropics over the course of the year, as in the area from Central Africa to the Malay Archipelago . Correspondingly, areas arise in a spectrum from always moist to dry. In addition, the winds of circulation, trade winds and monsoons, act locally onshore and then also cause precipitation.

The subtropics are thermally defined as the climatic zone with high summer and moderate winter warmth. They can be divided into dry, winter damp, summer damp and always damp subtropics. The subtropics and especially the winter-humid subtropics are sometimes referred to as the warm temperate zone .

A widespread definition defines the climate as subtropical where the mean temperature in the year is over 20 degrees Celsius, but the mean temperature of the coldest month remains below the mark of 20 degrees. The differences between day and night are huge. The vegetation ranges from the biodiversity, as it occurs, for example, in the Mediterranean region to the vegetation of the dry savannah to the barren or even completely absent vegetation in deserts such as the Sahara .

The temperate zone shows a large difference between the seasons, but it decreases somewhat towards the equator . Another characteristic is the differences between day and night, which vary greatly depending on the season . These differences increase the closer you get to the pole. The vegetation is characterized by coniferous , mixed and deciduous forests , with the coniferous forests becoming fewer and fewer towards the equator.

The main climatological criteria are the day length fluctuations of the sun (from 8 to 16 hours), which cause thermal seasons, the precipitation that is balanced over the whole year and the resulting very unstable weather. With values ​​around 800 mm, the temperate zone has the second highest amount of precipitation after the tropics. The middle widths are in the west wind zone .

In general, polar regions are understood to mean the region north and south of the polar circles: the Arctic in the northern hemisphere and the continent of Antarctica in the southern hemisphere of the earth. The polar ice and subpolar tundra climates are mostly combined.

The actual polar regions of the earth are the ice climates ( cold deserts ) (Lauer 1995). Temperatures are below or just above zero all year round, rainfall is low and solar radiation from the sun is reduced - on average 40% less than at the equator.

Development of the climate zone classification

Mathematical climate zones go back to antiquity , where the earth, whose spherical shape and axis inclination was already known, was often divided into a total of five zones at the tropic and polar circles (→  Climate (historical geography) ). In contrast to the hot and the two cold zones, only the two temperate zones were initially considered habitable. Subtropical and subpolar zones (actually "located below the Tropic or Arctic Circle") were later added to the zones of the tropics , the temperate latitudes and the polar region, which were initially thought to belong to the temperate zone. This principle is still used in part to the present day.

The climatic classifications created in the twentieth century tried u. a. also to do justice to this system. In particular with the effective classifications , which only depend on actually measured climatic elements , this initially only succeeded to a limited extent, since the delimitation based on temperature variables proves to be problematic. The genetic classifications derived from global circulation required additional zones. The zones in all of these systems were consequently given different names for the most part.

See also : "History of Science" in the Geozone article

The man-made global warming that is taking place now will undoubtedly lead to a shift in climatic zones over the coming decades. As a rule, it will be a north shift (or elevation shift of the elevation steps ). According to information from the BMBF in 1990, an increase in temperature per degree Celsius will shift the climate zones by 100 to 200 km.

The most decisive factor is the speed with which climate change will take place. It depends on whether the communities can adapt or not. A rapid rise in temperatures of several degrees Celsius will have consequences for most ecosystems, which, however, are difficult to predict because of the complexity of the systems. What is certain is that the extinction of animal and plant populations will intensify.