The title of this article is ambiguous. For the geometric term for obtuse triangles, see Arctic Circle (Geometry) . 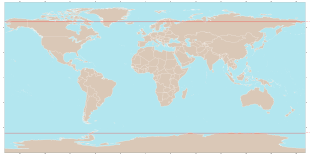 Polar circles is called the circles of latitude 66 ° 33 '55 "(≈ 66.57 °) the northern and southern latitude on which the sun on days of the solstice just no longer up or goes down . Their radius corresponds to the axial distance of the tropics from the equator .

The Arctic Circle was already known in ancient Greece : Pytheas reported in the fourth century BC. From the midnight sun , and Eratosthenes wrote about the polar circles a century later. In medieval Europe, the polar circles were drawn on the Cantino Planisphere from 1500.

The polar circles limit the polar regions . Its position results from the inclination of the earth's axis in relation to the perpendicular to the ecliptic of currently 23.43 °. The distance between the polar circles and the nearer pole is 2602 km and the equator 7383 km. Its length is 15,996.3 km.

Since the inclination of the earth's axis changes slowly ( obliqueness of the ecliptic ), the polar circles also shift. At the moment they are approaching the poles by about one arc minute in 128 years, or 14.4 meters per year.

On the day of the winter solstice , the sun is just not rising at the Arctic Circle. That is the day on which the summer solstice is in the other hemisphere .

Because of the refraction of light in the earth's atmosphere (see astronomical refraction ), the phenomenon occurs not only exactly on the polar circle, but also a little further away from the pole (from about ± 65.96 ° latitude) that the sun does not set on one day of the year.

The same applies to the winter solstice. Because of the astronomical refraction, however, you have to be a bit closer to not being able to see the sunrise:

The closer you get to the pole, the deeper below the horizon the sun is:

While the civilian population in the Arctic Circle and on Svalbard also lives far beyond (over 78 ° north latitude), there is no civilian population near or south of the Arctic Circle. The southernmost civil place on earth , the Argentine Esperanza station , is at 63 ° 23 'south latitude; this corresponds roughly to the proximity of the poles to Trondheim in central Norway .

Areas within the Arctic Circle do not cross the day-night boundary every day . Hence the polar night occurs here , i.e. H. in winter the sun does not rise there for at least one day (longer as the latitude increases).

Half a year later, polar day occurs in the same places : In summer the midnight sun shines for the same number of days, i.e. H. the sun doesn't go down.

In the polar night, however, it does not necessarily stay dark within the polar circles, as other factors have to be taken into account: