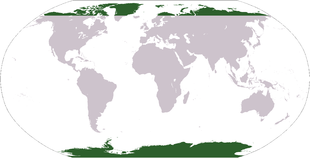 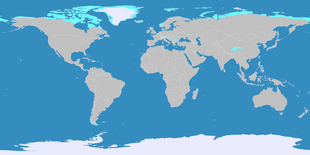 Polar climatic zone of the earth, consisting of the:

The polar region is understood to mean the regions of the earth that are located between the poles and the associated polar circles. These areas beyond 66.6 ° latitude also be high latitudes called .

The Arctic Circle comprises the Arctic , with the Arctic Ocean at its center . The southern polar circle includes Antarctica , which mainly includes the ice-covered continent Antarctica . The subpolar transition zones can also be included in climatic terms. The polar regions are also referred to as the eternal ice (polar permafrost ), even if this does not apply to the areas of northern Norway heated by the Gulf Stream , or the ground thaws on the surface at times.

In addition to the cold climate with lots of snow and ice, the polar day with the midnight sun and the polar night , which lasts up to six months, are special features of the polar regions , but also the northern lights .

There are also ice-covered polar regions on Mars . 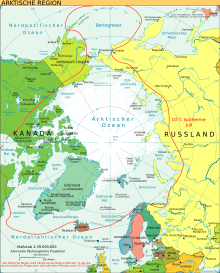 From a geometrical point of view, the polar regions are spherical caps with a radius of around 2600 km around the poles. In terms of climate and vegetation , they are mainly on the pole side of the natural tree line . Tundra vegetation can still survive in the outer polar region, but the extremely inhospitable ice climate makes plant growth practically impossible at high latitudes . The animals living here (e.g. polar bears ) are therefore exclusively dependent on animal food. Likewise, the coming plankton as the basis of the food chain to a particularly great importance.

While the demarcation of the polar region is relatively easy in the south - it includes the Antarctic mainland and the surrounding pack ice  - the demarcation in the north is much more difficult. The old definition, according to which everything north of the Arctic Circle belongs to the Arctic, does not do justice to the climatic conditions along this circle, since the ocean currents in the areas of the Arctic Ocean have a significant influence on the climate. The Hudson Bay in Canada is frozen over for six months, while the port of Hammerfest ( Norway ), more than 1000 kilometers further north, remains ice-free all year round. A different definition of the polar climate has therefore become established: an area is considered to be arctic if the mean temperature in the warmest month (July in the northern hemisphere) does not exceed 10 ° C.

The polar or arctic climate is characterized by long, very cold polar winters, in which the sun does not rise above the horizon for days or weeks and the ground is deeply frozen ( permafrost ); and through foggy, cool polar summers, in which the sun rises above the horizon, but its rays only reach the earth's surface at a shallow angle of incidence, so that the ground only thaws superficially. Accordingly, the vegetation period is very short and the land, even where it is not permanently covered by ice, is very bare. It can katabatic winds and polar lows occur.

The high alpine climate is comparable to the polar climate , as the conditions here are similar, in particular with regard to the average temperatures and the permafrost soils.

Although the polar zones are hostile to life - which makes exploring these areas a risky adventure despite modern technology - forms of life can be found both in the polar regions of the northern hemisphere (e.g. polar bears ) and in those of the southern hemisphere ( z. B. penguins , some species of birds , insects , in the sea marine mammals such as whales and many fish ) that are optimally adapted to the difficult living conditions there.

Only relatively few plants manage to survive in the polar climate zone. When the sun's rays allow it and the ice cover melts, which can also occur in particularly protected areas in the Antarctic , some species of lichen , grass species (e.g. billy grass) and moss species come to light . This is particularly the case in the Antarctic islands and in southwest Greenland .

There are few human settlements in these areas, most of them being inhabited by Eskimos in northern Alaska and Greenland. Alert , Nunavut , located at 82 ° 28 'N. Br., Is the northernmost permanently occupied human settlement on earth. The Antarctic continent itself is uninhabited , apart from a few weather and research stations .