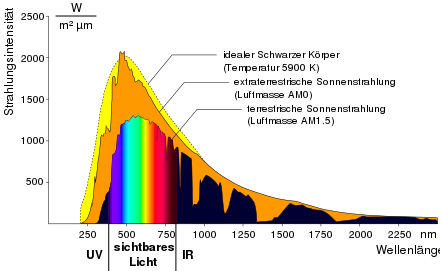 Intensity of solar radiation at AM 0 (near-Earth space) and AM1.5 (approximately at the highest point of the sun in Karlsruhe) compared to the emission of an ideal black body at a temperature of 5900 K.

In addition to electromagnetic radiation , the sun also emits mass particle radiation, which is usually not counted as solar radiation. It consists of the charged particles of the solar wind and the neutrinos , which are created in the interior of the sun during nuclear fusion and subsequent reactions. 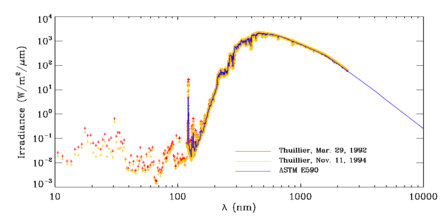 Spectral intensity of solar radiation in a double-logarithmic plot .

The spectrum of the sun's electromagnetic radiation has its maximum at about 500 nm wavelength (blue-green light ), but ranges from hard X-rays with less than 0.1 nm to long radio waves . The continuous spectrum from about 140 nm ( UVC ) to about 10 cm (microwave) is approximately that of a black body with a temperature of almost 6000 K, which corresponds to the temperature of the photosphere . This light spectrum is divided into ultraviolet light (UV: 100–380 nm), visible light (VIS: 380–780 nm) and infrared light (IR: 780 nm-1 mm) with the limits of our eye perception.

In the range from near infrared radiation (NIR) to UV, the spectrum contains a large number of absorption lines , the so-called Fraunhofer lines . They arise from the absorption of radiation in the photosphere of the sun.

Solar flares , the frequency of which depends on solar activity , briefly increase radiation in the X-ray range by several orders of magnitude, but make little contribution to total radiation. They are often accompanied by long-wave radio emission ( English radio bursts ), which depends on the intensity profile as type I to type V is categorized.

The calm sun shines not only in the light area, but in the entire radio window . There, their spectrum is no longer that of a black body , rather the effective temperature increases from approx. 6000 K at 1 cm wavelength to 1,000,000 K at 10 m. The apparent diameter of the sun also increases with the wavelength, and the radiation is increasingly dominated by the outer atmosphere. The calm sun is thermal bremsstrahlung of free electrons. The most important radiation components of a disturbed sun are:

Sun exposure to the earth

The neutrinos created in the interior of the sun during nuclear fusion carry away 2% of the fusion power. The total electromagnetic radiation output of the sun is dominated by the thermal radiation of the photosphere, which fluctuates by less than 0.1%.

The power falling to the earth fluctuates by almost 7% over the course of the year due to the eccentricity of the earth's orbit . The average power per area is called the solar constant. It is considered outside the earth's atmosphere and amounts to

Attenuation by the atmosphere

The intensity of solar radiation is lower on the ground than outside the atmosphere, the absorption and scattering of which is strongly dependent on the wavelength: the portion that can be perceived by the human eye, which makes up almost half of the solar radiation, mostly reaches the surface of the earth in clear weather and a high position of the sun . The invisible radiation is predominantly near infrared radiation (NIR), which makes up approx. 46% of the radiation output and around a quarter of which is absorbed in the atmosphere, mainly by water molecules. Of the ultraviolet radiation , which makes up less than 10% of the radiation, UVA largely penetrates, mainly weakened by Rayleigh scattering , which is also responsible for the fact that the sky is blue and that one turns brown in the penumbra. UVB is strongly absorbed by the ozone layer, UVC by atmospheric oxygen.

If the solar radiation falls at an angle, it is distributed over a larger surface of the earth and the irradiance drops. This effect runs with the sine of the elevation angle . The influence of the seasons in the tropics is hardly noticeable. Since the position of the sun is always steep there at noon, there is a daytime climate . Outside the tropics, there is an increasing difference between summer and winter towards the poles , both due to the angle of incidence and due to the increasing differences in day lengths towards the poles .

In Central Europe , the midday summer sun is 60 ° to 65 ° high and radiates in ideal cloud-free weather conditions with a direct radiation strength of around 700–900 W / m². In winter it is only 13 ° to 18 ° and in cold, dry air, values ​​over 800 W / m² can be reached at noon. The duration of sunshine is counted for irradiation times in which the direct radiation reaches values ​​of over 150 W / m² and the shadows begin to show contrast.

The warming of the earth's surface depends on the length of the bright day . At the end of June the duration in Central Europe is around 16 hours, in December 8 hours. The ratio of the total irradiated solar energy between these months is about 5: 1 to 10: 1, but is tempered by heat storage mainly by the oceans ( maritime climate ).

In the microclimate , the irradiance depends on the angle of incidence as well as on the sun exposure .

The temperature of the earth's surface is globally determined by the radiation balance , the radiation budget. This records the interaction between absorption and reflection as well as re-emission and scattering. 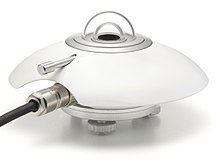 A pyranometer for measuring solar radiation

The solar radiation is measured using pyranometers (placed parallel to the ground), pyrheliometers (tracking the sun) or sunshine autographs . The latter are now out of date in modern measurement technology and were mainly used to determine the duration of sunshine . The solar constant, however, is measured outside of the atmosphere using radiometers .