As transverse waves, electromagnetic waves show the phenomenon of polarization . In free space , the vectors of the electric and magnetic fields are perpendicular to each other and on the direction of propagation. The transversality may be violated if - as with plasma oscillations ( plasmons ) - carriers of chemical properties, e.g. B. metallic or bound electrons are involved. The sources, propagation properties and effects of the radiation differ accordingly in the various areas of the electromagnetic spectrum .

Identify and measure the presence of electromagnetic waves

Receivers for electromagnetic radiation are called sensors or detectors , and in living beings, photoreceptors . Radio waves can be detected by antennas .

Which can be an electromagnetic wave to wave velocity measure, on the one hand in the vacuum universal constant speed of light , as well as deviating values for the phase velocity in a transmissive (transparent) medium. The intensity can also be measured, which is equivalent to the power or the energy transported per unit of time through a specific cross section .

There are different methods of measuring the wavelength, depending on whether it is shorter or longer wavelengths. Wavelength and frequency can be passed through

convert into each other.

Examples of experiments in which the wave character comes into play:

For certain properties of electromagnetic waves (e.g. photoelectric effect ), the wave model described above is not sufficient to describe all observable phenomena, rather the particle properties of individual photons , the quanta of the electromagnetic field, come to the fore. The wave character (e.g. interference ) remains fully intact. One therefore speaks of the dualism of particle and wave .

Within the framework of this concept of light as a particle, each frequency is assigned the energy of a single photon , which is Planck's quantum of action . On the other hand, particles, such as electrons moving across several atoms , also have wave properties (see also electrical current ). Both aspects of electromagnetic waves can be explained in terms of quantum electrodynamics .

Examples of effects in which the particle character comes into play:

Photons with sufficient energy (e.g. from a few electron volts upwards) have an ionizing effect on matter and can trigger chemical ( photochemical ) effects if the binding energies are exceeded ( photochemistry ). This chemical effectiveness is also known as actinity .

Waves in the medium

The phase velocity with which a monochromatic wave moves in a medium is typically lower than in a vacuum. In a linear approximation it depends on the permittivity and the permeability of the substance,

and is therefore dependent on the frequency of the wave (see dispersion ) and, in the case of birefringent media, also on its polarization and direction of propagation. The influence of static fields on the optical properties of a medium leads to electro- optics or magneto-optics .

A direct force effect (e.g. change of direction) on a propagating electromagnetic wave can only take place through the medium of propagation (see refraction , reflection , scattering and absorption ) or be mediated (see nonlinear optics and acousto-optical modulator ).

Visible light represents only a small part of the entire spectrum and, with the exception of infrared radiation (heat), is the only area that can be perceived by people without technical aids. At lower frequencies, the energy of the photons is too low to trigger chemical processes. At higher frequencies, however, the range of ionizing radiation ( radioactivity ) begins , in which a single photon can destroy molecules. This effect already occurs with ultraviolet radiation and is responsible for the formation of skin cancer with excessive sun exposure.

Sensitivity distribution of the three types of cones in humans: The sensitivity of the rods is shown in black . The curves are each scaled so that their maximum is 100%.
See also : Electromagnetic environmental compatibility

When it comes to the interaction of electromagnetic radiation with biological matter, a distinction must be made between ionizing radiation (greater than 5 eV) and non-ionizing radiation. With ionizing radiation, the energy is sufficient to ionize atoms or molecules, i. H. Knock out electrons. This creates free radicals that cause biologically harmful reactions. If the energy of photons reaches or exceeds the binding energy of a molecule, each photon can destroy a molecule, so that, for example, accelerated aging of the skin or skin cancer can occur. Chemical binding energies of stable molecules are above about 3 eV per binding. If the molecules are to change, photons must have at least this energy, which corresponds to violet light or higher frequency radiation.

When it comes to the interaction of non-ionizing radiation, a distinction is made between thermal effects (radiation has a warming effect because it is absorbed by the tissue ), direct field effects (induced dipole moments, changes in membrane potentials), quantum effects and resonance effects (synchronization with the oscillation of the Cell structure).

A photon with a wavelength of 700 nm or shorter can cause the conformation of the rhodopsin molecule to change . In the eye of this change is recorded and processed as a signal from the nervous system. The sensitivity for a certain wavelength changes with modifications of the rhodopsin. This is the biochemical basis of the color sense . Photons of light with a wavelength above 0.7 µm have an energy below 1.7 eV. These waves cannot cause chemical reactions on molecules that are stable at room temperature. Because of this, animal eyes usually cannot see infrared or thermal radiation. In 2013, however, researchers discovered that the cichlid Pelvicachromis taeniatus can see in the near-infrared range. There are also other sense organs for infrared radiation, such as the pit organ in snakes .

Photons can excite vibrations in molecules or in the crystal lattice of a solid . These vibrations make themselves felt in the material as thermal energy . Additional vibrations excited by electromagnetic waves increase the temperature of the material. In contrast to the effect of individual photons on chemical bonds, what matters here is not the energy of the individual photons, but the sum of the energy of all photons, i.e. the intensity of the radiation. Long- wave electromagnetic radiation can indirectly change biological substances through heat denaturation .

Speed ​​of light and special relativity

→ Main articles : Speed ​​of light  and Special Theory of Relativity

How fast does light about spreads , was known since 1676th However, until 1865 there was no connection to other physical phenomena. James Clerk Maxwell was able to produce this between 1861 and 1862 using the Maxwell equations he found , which predict the existence of electromagnetic waves. Their speed agreed so well with the then known speed of light that a connection was immediately established. Heinrich Hertz was able to demonstrate these waves experimentally in the 1880s.

In classical mechanics, waves (in the direction of propagation ) are defined by the wave equation

described. The term here refers to the deflection of the wave and its phase velocity , which can be interpreted as the propagation velocity of the wave.

From Maxwell's equations, the relationship for the electric field strength in a vacuum can be :

derive (in SI units ; see section Mathematical Description ). In this respect the electric field strength behaves like a wave; the size

occurs as the speed of propagation. This speed is composed exclusively of natural constants that are independent of the observer's reference system, which is consequently transferred to the size . 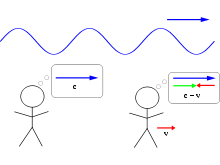 This contradiction to classical mechanics is resolved in favor of Maxwell's equations: The fact that electromagnetic waves propagate in all inertial systems with the same speed - the much-cited constancy of the speed of light - is a postulate in Einstein's special theory of relativity published in 1905 . The so-called Lorentz invariance replaces the Galileo invariance .

If one considers the propagation of electromagnetic waves in polarizable media, the polarization must also be considered:

Derivation of the electromagnetic wave equation

The mathematical relationships associated with wave propagation can be understood on the basis of Maxwell's equations. In particular, the same form of the wave equation can be derived with which other types of waves, for example sound waves, propagate.

In a vacuum, i.e. in a charge-free space with the exclusion of dielectric , dia- and paramagnetic effects, the material equations of electrodynamics and . In addition, the current density and charge density are zero.

Based on Maxwell's third equation

one applies the rotation operator to both sides . This gives:

If one inserts the fourth Maxwell's equation into it ,

The vector-analytical relationship applies in general to this

If one applies this relation and takes into account that the charge-free space is considered, in which the divergence is zero according to Maxwell's first equation , then it follows:

If you now put (2) and (3) together, the following wave equation results :

Almost all waves can be expressed by equations of form

This gives the equation from (4)

Analogously, the relationship for the magnetic flux density can be

derive. The solutions to these equations describe waves that propagate in a vacuum at the speed of light . If the electromagnetic wave propagates in an isotropic material with the dielectric constant and the permeability , the speed of propagation is

The ratio of the speed of light in a vacuum to the speed in the medium is called the refractive index .

With the help of Maxwell's equations, further conclusions can be drawn from the wave equation. Let us consider a general plane wave for the electric field

where is the (constant) amplitude, an arbitrary C 2 function , a unit vector pointing in the direction of propagation, and a position vector. First, by inserting it into the wave equation, one sees that the wave equation satisfies, i.e. that

In order to describe an electromagnetic wave, it not only has to fulfill the wave equation, but also the Maxwell equations. That means

The electric field is always perpendicular to the direction of propagation, so it is a transverse wave . Substituting into another Maxwell equation gives

and there is, it follows

In natural units ( ), both amplitudes have the same value.