An X-ray tube is a special electron tube used to generate X-rays . In its simplest form, it consists of a cathode and an anode , which are hit by electrons accelerated from the cathode under high voltage . The electrodes of the earliest X-ray tubes were melted into a partially evacuated glass vessel, often in the form of an elongated tube - hence the name component tube . The name was given after the discoverer of radiation, the German physicist Wilhelm Conrad Röntgen . Today's high-performance tubes have a highly evacuated, robust metal-ceramic housing. 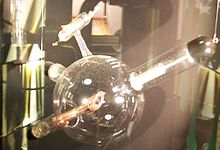 An old-style medical X-ray tube, until around 1920

Schematic drawing of an X-ray tube

The cathode emits electrons , which in the electric field of the applied high voltage (25-600 kV) in the direction of the anode accelerates be. There they hit the anode material and when they are decelerated they generate three different types of radiation: the characteristic X-ray radiation , bremsstrahlung and lily field radiation (a form of transition radiation ).

In the case of high-performance tubes such as those used in computed tomography (CT) and angiography , the vacuum container is made of metal, which can withstand much higher temperatures. In the course of time, technical improvements were made to X-ray tubes, but these did not change the principle of generating X-rays.

While only the outer shell electrons of the atoms are involved in sources of visible light , the high-energy electrons accelerated in the X-ray tube in the anode also knock electrons out of the innermost shells of the atoms of the anode material. Either electrons from higher energy levels or free electrons “jump” into these gaps. Since the binding energies of the innermost electron levels are very large, there is no visible light, but the characteristic X-ray radiation with discrete quantum energies or wavelengths typical of the material. The energy released corresponds to the difference between the binding energy of, for example, the K-shell and the more energetic N-shell . Of course, all other discrete quantum energies are also possible, for example those between K and L shells , between M and K shells, M and L shells or - as mentioned - also from “free” electrons to K or L -Bowl.

However, with the exception of mammography and crystal analysis, this discrete or characteristic X-ray radiation with the respective quantum energies and thus wavelengths is not used, or only used to a small extent, for image generation during X-ray fluoroscopy.

In mammography, an anode plate made of molybdenum with appropriate filters is used, so that in this case the K-radiation of the molybdenum is used for the absorption of the mammary gland . Discrete wavelengths are also required for crystal structure analysis. Apart from these exceptions, only X-ray braking radiation is used for imaging in medicine and materials testing .

Electrons in the inner shells can be knocked out of the atom not only through external impacts, such as in the X-ray tube, but also through the process of internal conversion .

The X-rays are generated in typical X-ray tubes, for example for medical diagnostics, through the acceleration and deceleration of the electrons when they are scattered on positively charged atomic nuclei of the anode. Therefore, this radiation is also referred to as bremsstrahlung in international parlance. Every accelerated electrical charge (this also includes deceleration) generates electromagnetic radiation. The wavelength of the radiation depends on the strength of the acceleration. The continuous X-ray spectrum depends on the acceleration voltage between cathode and anode. In terms of quantum mechanics, the shortest wavelength and thus the highest energy of the X-ray photons is given by the energy of the electrons hitting the anode. A few electrons manage to transfer their entire kinetic energy to individual photons through hard scattering. This so-called Duane-Hunt limit energy does not depend on the anode material, but solely on the kinetic energy of the electrons. The tube voltage determines the hardness of the radiation and thus its penetration. Electron current and voltage define the intensity and thus the absolute brightness of the X-ray image.

In 1919, Julius Edgar Lilienfeld was the first to describe a gray-white radiation visible to the human eye at the anode of X-ray tubes, the lily field radiation named after him . The change in permittivity between the vacuum of the tube and the anode material was only recognized as its cause in later years.

In the cathodes, the electrons can be released in various ways, in particular by heating or by high field strengths. Each of the types requires a specific type of cathode.

The cathode of this type of tube, also named Coolidge tube after its inventor William David Coolidge , consists of a filament , which usually consists of a tungsten wire . This hot cathode is heated to about 2000 ° C by current flow, so that glowing emission of electrons from the metal takes place. The electrons form a negatively charged electron cloud, which counteracts the escape of further electrons. The electrons are only accelerated to the anode when a positive voltage is applied. If the tube only consists of a cathode and anode, it is called a diode. The anode current is determined by the field and, from a saturation value, by the filament heating current.

The filament is only heated to moderate temperatures here, depending on the material. Heating up alone does not result in emissions. However, this means that many electrons are at an increased energy level above the Fermi level. If a so-called extraction grid is placed over the filament, which is positive in relation to it, very high field strengths of several volts per micrometer are generated in the space between the cathode and the extraction grid. This causes electrons to be drawn out of the filament. The potential of the so-called vacuum level - the potential that an electron has to reach in order to be really free from the original solid - is lowered by the strong external field with increasing distance from the surface of the metal / filament. The electrons can now tunnel through this potential to the vacuum level and leave the solid. Behind the extraction grid follows the negatively charged control grid - the Wehnelt cylinder.

Field emission cathodes have a very small emission area, so that a small point of impact on the anode can also be achieved with appropriate electron lenses. As a result, the origin of the X-rays is approximately a point source, which enables a more detailed examination of even very small objects.

With a stationary anode, the electrons hit an area typically 1 mm × 10 mm in size. In the area of ​​this focal point, the wear of the anode material can become very high. For example, tungsten plates embedded in copper are used. Tungsten has a particularly high conversion rate of electrical energy into X-ray energy and at the same time has a high melting point.

The fixed anodes of devices for crystal structure analysis are mostly water-cooled because of the long measurement times, with recooling being used more and more often to save water.

The first rotating anode was developed by Ernst Pohl in Kiel in the 1930s . It usually consists of a composite plate made of a tungsten outer layer and an underlying high heat-resistant molybdenum - alloy , via a shaft to a rotor is fixed (squirrel cage). Outside the X-ray tube there is the stator coil package for driving the rotor on the principle of an asynchronous motor . The electrons hit the edge of the plate. By rotating the plate, the heat from the focal point is distributed on the edge of the plate. This leads to a longer service life of the anode and enables a greater beam intensity than would be achievable with a fixed anode until the anode material melts.

The number of revolutions of such anodes is different: while anode plates with a diameter of about 8 to 12 cm rotate at 8000 to 9000 revolutions / minute and usually not in continuous operation (the service life of ball bearings in a vacuum is only a few hundred hours; the plate is therefore accelerated and after the Recording braked again), high-performance anodes with a diameter of about 20 cm rotate at 3500 to 6000 revolutions / minute in continuous operation and are preferably mounted on wear-free hydrodynamic slide bearings . Due to the strong heat development (99% of the energy used becomes heat), the anode plate must be cooled. In the case of tubes with ball bearings, this happens only through heat radiation, and in the case of tubes with liquid metal plain bearings, additionally through direct heat dissipation into the interior of the bearing and then into the cooling water or cooling oil. Another advantage of hydrodynamic plain bearings is the wear-free, almost noiseless operation, so that for this reason too, the anode does not need to be accelerated and decelerated. 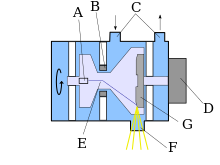 A more recent development is the rotating envelope tube. With this technology, the anode is designed as part of the wall of the tube and the entire tube rotates. The cathode sits in the center of the tube's axis of rotation and the electron beam is magnetically directed onto the circular path of the anode. With this construction it is possible to cool the anode directly with oil, since it is part of the casing of the tube. Metal or glass housings are used as the housing, whereby the glass housing can simultaneously take over the function of the insulator between anode and cathode. In the case of metal housings, additional insulators made of tubular glass , glass or ceramic must be installed. This allows very powerful tubes.

A suitable shielding in a housing is necessary for the safe operation of an X-ray tube. This shielding causes:

Often the tube is cooled by oil and also insulated.

The used as amplifying elements or switches in various fields of electronics electron tubes emit undesirably X-rays at high voltages. This fact led to serious damage to the health of radar technicians who worked on radar devices from the 1950s to the 1980s whose high-voltage interrupters were inadequately shielded.