The permittivity ε (from the Latin permittere : allow, leave, allow), also called dielectric conductivity or dielectric function , indicates in electrodynamics and also in electrostatics the polarization ability of a material through electrical fields .

The factor here is the substance-dependent relative permittivity. However, it depends not only on the type of substance, but also on the frequency of the active fields, among other things.

In a dielectric, the orientation of stationary electrically charged dipoles leads to polarization effects. Such materials can conduct the electrical flow by a factor (relative permittivity) better than empty space.

Permittivity is a material property of electrically insulating , polar or non-polar substances, which are also called dielectrics . The property takes effect when the substance interacts with an electric field, for example when it is in a capacitor .

In a capacitor filled with material, the charge carriers of the insulation material are oriented towards the vector of the electric field and generate a polarization field that counteracts the external field and weakens it. Assuming a given electrical excitation field , also called electrical flux density, this phenomenon of field weakening can be described by assigning a factor to the electrical field constant (permittivity of the vacuum) to the insulating material . In a vacuum, the reference material for an insulating material is the relative permittivity

From the external electrical excitation the electrical field then results with the permittivity :

Under the influence of a fixed voltage  U applied to the capacitor plates and the electric field (plate spacing  d ), the electrical excitation results with the permittivity as a proportionality factor :

The electrical susceptibility is linked to the relative permittivity via

According to the Poisson equation of electrostatics, the permittivity can also be viewed as a proportionality factor between the space charge density and the second partial derivative of the potential field:

Permittivity of the vacuum

The unit of permittivity can be expressed as:

Since the electrical polarizability of air is low, the permittivity of the air ( ε r  ≈ 1.00059) can often be approximated with sufficient accuracy . This is particularly the case with radar and radio technology .

In addition to the Coulomb's law , the Ampere's law and Faraday law of induction , the relationship between μ 0 , and c another link electromagnetic and mechanical units, which fall in the choice of the electromagnetic unit system is taken into account.

The relationships in the SI are given above. In systems of units that explicitly trace the electromagnetic quantities back to mechanical basic quantities, namely the different variants of the CGS system of units , the number is chosen as the quantity of the dimension :

For gaseous, liquid and solid matter it is . However, in other states of matter, e.g. B. in plasma , also values .

As a synonym for (relative) permittivity, the previous designation (relative) dielectric constant is still in use. The designation as a constant is inappropriate because it is generally a function of several parameters, in particular frequency and temperature; it also depends on the magnetic and external electric field.

In general, the relative permittivity is a second order tensor . This reflects their directional dependence, which results from the crystalline (or otherwise ordered) structure of matter, e.g. B. for birefringent materials that u. a. when retardation plates are used. The tensor property of permittivity is the basis of crystal optics .

The frequency dependence ( dispersion ) of the permittivity in matter can be modeled quite well using the Lorentz oscillator and is e.g. B. very pronounced in water, cf. Illustration.

Like the electrical permittivity, the refractive index of a material also depends on the frequency , since according to Maxwell's equations it has the following relation to the permittivity:

Here and μ are meant for the relevant optical frequency (order of magnitude 10 15  Hz). The optical dispersion is an expression that also at the frequencies of visible light is not a constant number.

In tables , the numerical value is usually given at low frequencies (order of magnitude 50 Hz to 100 kHz) at which molecular dipoles can follow the external field almost instantaneously. 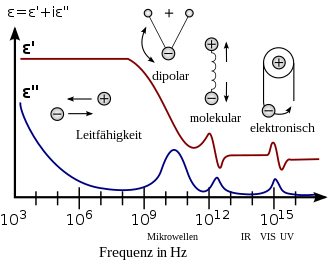 Course of the complex-valued relative permittivity over a wide frequency range, split into real (red) and imaginary parts (blue) with symbolic representation of the various causes such as relaxation and, at higher frequencies, atomic and electronic resonances

The contributions of various mechanisms in the material (e.g. band transitions ) can be specified in the real and imaginary parts and their frequency dependence can be added - a more detailed representation can be found under electrical susceptibility .

The lagging effect becomes stronger with increasing frequency . By quickly and repeatedly repolarizing insulating materials, alternating fields of high frequency convert electromagnetic field energy into thermal energy . This heat loss is called dielectric loss and is described by the imaginary part or the complex-valued relative permittivity.

A widespread application that takes advantage of the dielectric heating phenomenon is in the microwave oven .

In dielectric heating, the loss is power density , based on the volume of material

The power loss associated with dielectric heating, when integrated over the heating period, corresponds exactly to the internal energy that was supplied to the material volume with electromagnetic waves, as described in thermodynamics .

At even higher frequencies, with which charge carriers in the band model of a crystal can be excited, energy is also absorbed ( dielectric absorption ).

The temperature-dependent, for example, the complex-valued relative permittivity of water, the real part of which assumes a value of around 80 at a frequency of 1 GHz and a temperature of 20 ° C and around 52 at 95 ° C. The decrease in permittivity with increasing temperature is related to the increasing degree of disorder of the charge carriers with an increase in internal energy. From a molecular point of view, the polarizability decreases due to the increasing intrinsic movement of the charge carriers with higher internal energy; From a macroscopic point of view, the relative permittivity decreases with a rise in temperature.

Tabulated, comprehensive overviews of frequency- and temperature-dependent, complex relative permittivities of many materials can be found in Industrial Microwave Heating and especially in Dielectric Materials and Applications .

Relationship with absorption and reflection

Using the Kramers-Kronig relation , the dispersive relationship between the complex permittivity and the optical parameters refractive index and absorption coefficient  k can be shown:

In the case of non-magnetic materials ( ) it follows after a coefficient comparison :

For the calculation of theoretical spectra of reflection and absorption , which can be compared with measured spectra and adapted, the components of the complex refractive index must be determined directly from the real and imaginary part of the permittivity:

Also can u. a. the reflectance  R can be calculated for a ray coming from the vacuum (or air) which is reflected perpendicularly at an interface to a medium with a refractive index :