Germanium (from Latin Germania ' Germany ', after the country in which it was first found) is a chemical element with the element symbol Ge and the atomic number 32. In the periodic table it is in the 4th period and in the 4th main group (14th . IUPAC group , p- block and carbon group ). It was first detected in the mineral argyrodite in 1886 . 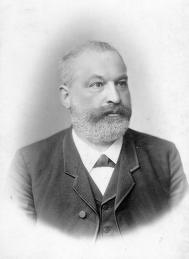 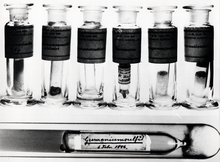 Preparations of the element germanium made by Clemens Winkler.
Above: The preparations shown at the 1904 World Exhibition in St. Louis
Below: Germanium sulfide from February 6, 1886

When Dmitri Mendeleev designed the periodic table in 1871 , he came across a gap below silicon and postulated a previously unknown element, which he called eka-silicon. Mendeleev made predictions about the properties of eka-silicon and its compounds, but these were rejected by science.

In 1885, Clemens Winkler (1838–1904), a chemist at the Freiberg Mining Academy , found that when he was working with the newly discovered mineral argyrodite, its quantitative analysis always yielded a shortfall of around seven percent. As often as the analysis was repeated, the shortfall remained more or less constant and Winkler finally suspected that the mineral contained a previously unknown element. After four months of work, he finally managed to isolate a white sulphide precipitate on February 6, 1886 , which could be reduced to a metallic powder in a stream of hydrogen . Based on the previously discovered planet Neptune , Winkler initially wanted to name the new element Neptunium . However, since this name had already been used for another suspected element, he named it germanium after the place of discovery. Winkler initially suspected that the germanium was the eka stibium postulated by Mendeleev , while Mendeleev initially wanted to classify it as eka cadmium rather than eka silicon. After further properties were determined, it was confirmed that it was probably the predicted element eka-silicon. Mendeleev had derived its properties from his periodic table, so this discovery contributed to the recognition of the periodic table:

The origin and etymology of the name germanium could also result from a semantic misunderstanding in connection with its predecessor element gallium , because there are two theories for the naming of gallium. After the first, the French chemist Paul Émile Lecoq de Boisbaudran named the element after Gaul , the Latin name of his native France . The second gives the Latin word gallus (cock) as the source of the name, which in French means le coq ("the cock"). Paul Émile Lecoq de Boisbaudran would have named the new element after his own name. Winkler assumed that the previous element gallium was named after the nationality of the French discoverer. He named the new chemical element “germanium” in honor of his country (Latin Germania for Germany). 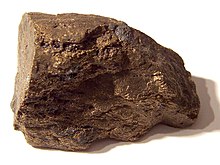 Germanium is widespread, but only occurs in very low concentrations. The Clarke value , i.e. the average content in the earth's crust, is around 1.5 g / t . In nature it usually occurs in the form of sulfides or thiogermanates and is often found as a companion in copper and zinc ores , including in Mansfeld copper shale . The most important minerals are argyrodite (Ag 8 GeS 6 ), canfieldite , germanite (Cu 6 FeGe 2 S 8 ) and renierite . Some plants enrich germanium. This property leads to highly controversial theses regarding the physiology of plants (“plant defense against viruses”), with which applications in homeopathy are justified.

The germanium oxide (GeO 2 ) containing flue gases from zinc ore processing are particularly suitable for producing germanium. The germanium is enriched from the flue gas by dissolving the fly ash in sulfuric acid. After the dissolved GeO 2 and ZnO have been precipitated, further processing is carried out by distilling the metal chlorides. The hydrolysis then leads back to the oxide, which is reduced to germanium with hydrogen. The representation of high purity germanium can, for. B. be done by the zone melting process.

Germanium is in the semimetallic series in the periodic table , but according to the more recent definition it is classified as a semiconductor . Elemental germanium is very brittle and very stable in air at room temperature. It is only oxidized to germanium (IV) oxide (GeO 2 ) when it is heavily glowing in an oxygen atmosphere . GeO 2 is dimorphic and is converted from the rutile modification (CN = 6) to the β-quartz structure (CN = 4) at 1033 ° C. In powder form, it can be easily ignited and continues to burn after removing the ignition source. In compact form, it is not flammable.

Germanium is bivalent and tetravalent. Germanium (IV) compounds are the most persistent. Germanium is not attacked by hydrochloric acid , potassium hydroxide solution and dilute sulfuric acid . In alkaline hydrogen peroxide solutions, concentrated hot sulfuric acid and concentrated nitric acid , however, it is dissolved with the formation of germanium dioxide hydrate. According to its position in the periodic table , its chemical properties are somewhere between silicon and tin .

Germanium is one of the few substances that shows a density anomaly . Its density in the solid state is lower than in the liquid. Its band gap is about 0.67 eV at room temperature  .

As a semiconductor , germanium in single crystal form was the leading material in electronics in the middle of the 20th century, especially for the manufacture of the first diodes and bipolar transistors available on the market , until it was replaced by silicon in these areas. Applications are found today in high-frequency technology (e.g. as silicon-germanium compound semiconductors) and detector technology (e.g. as X-ray detectors). For solar cells made of gallium arsenide (GaAs), wafers made of germanium are sometimes used as the carrier material. The lattice constant of germanium is very similar to that of gallium arsenide, so that GaAs can grow epitaxially on germanium single crystals.

Its second main application is in infrared optics in the form of windows and lens systems made of poly- or monocrystalline germanium as well as optical glasses with infrared permeability, so-called chalcogenide glasses. Areas of application for this include military and civil night vision devices and thermal imaging cameras .

Other significant uses are in the manufacture of optical fibers and polyester fibers: In modern glass fibers for telecommunications, with the aid of germanium tetrachloride in the chemical vapor deposition enrichment of germanium dioxide generated in the inner fiber core. This results in a higher refractive index in the core compared to the fiber cladding , which ensures that the light waves are guided. In polyester chemistry, germanium dioxide is used as a catalyst in the production of certain polyester fibers and granulates, especially for recyclable PET bottles (PET = polyethylene terephthalate ).

68 Ge is used in the Gallium-68 generator as the mother nuclide for the production of Gallium-68. Also found 68 Ge as a source for Detektorkalibration in positron emission tomography application.

As a high-purity single crystal , germanium is used as a radiation detector.

The substance bis (carboxyethyl) germanium sesquioxide ( Ge-132 ) has been touted as a dietary supplement for use in a number of diseases including cancer , chronic fatigue syndrome , immune deficiency , AIDS , high blood pressure , arthritis and food allergies . So far, no positive effects on the course of the disease have been scientifically proven.

The responsible authorities expressly warn against the consumption of Ge-132 , as serious damage to health and death cannot be ruled out.

Medicinal use of germanium

A therapeutic efficacy of the anti- neoplastic substance Spirogermanium in cancer diseases has not been proven. There are no approved finished medicinal products with the active ingredient spirogermanium. In Germany, pharmaceutical preparations (recipes) containing germanium are considered questionable , apart from homeopathic dilutions from D4. Their production and their distribution are therefore prohibited. Germanium metallicum is available in the form of homeopathic medicines . Di- potassium germanium citrate lactate is described as a component of homeopathic preparations .

Germanium and its compounds have a relatively low acute toxicity . Traces of germanium can be found in the following foods: beans , tomato juice , oysters , tuna and garlic . According to the current state of science, it is not an essential trace element. There is no known biological function for germanium. No germanium deficiency diseases are known.

Health damage caused by germanium occurred several times in humans after prolonged intake of germanium compounds as food supplements. This can lead to functional disorders of the kidneys up to (irreversible) kidney failure, which can be fatal for the patient . Peripheral neuropathy and other secondary neurological damage have also been reported.

It is known from animal experiments that germanium has a low acute oral toxicity. In rats, the LD 50 value (the dose at which half of the test animals die) is 3700 mg per kilogram of body weight.

By currently available data from animal experiments Germanium is not teratogenic or carcinogenic .

The mechanism of toxicity of germanium is not yet fully understood. However, specific pathological effects on the mitochondria of different cells were observed.

It is also discussed whether germanium might interact with silicon in bone metabolism. It can block the action of diuretics and reduce or block the activity of a number of enzymes , such as dehydrogenases . In animal experiments , mice show an increased hexabarbital-induced sleep duration if they were also treated with germanium compounds. This suggests that cytochrome P450 activity is also restricted. There have been reports of organic germanium compounds that block the detoxification enzyme glutathione-S-transferase .

Germanium is very easily absorbed by the body when ingested. It is distributed over the entire body tissue, primarily in the kidneys and the thyroid . In contrast to inorganic germanium compounds, organogermanics do not accumulate in the human body. However, there are only a few studies of germanium metabolism.

It is essentially excreted in the urine. Excretion via bile and faeces also takes place.

Ge (II) and Ge (IV) representatives of the germanium halides are also known. Germanium tetrachloride , (GeCl 4 ), a liquid with a boiling point of 83 ° C, is formed when germanium oxides are exposed to hydrogen chloride and is an important intermediate in the production of germanium. Highly pure GeCl 4 is used in the manufacture of optical waveguides made of quartz glass in order to produce a high-purity germanium (IV) oxide layer on the inside of the quartz fibers. The disproportionation of germanium (II) iodide with the formation of germanium and germanium (IV) iodide can also be used to produce highly pure germanium layers :

Germanates are compounds of germanium that are derived from its oxide. In almost all minerals containing germanium, the germanium is present as germanate.

Germans are the names of the hydrogen compounds of germanium, which form a homologous series of chain molecules of different lengths. Monogerman or germanium hydride (GeH 4 ) is a gas and is used in the semiconductor industry for epitaxy and doping.