This article deals with the chemical element lutetium ; for the geological level Lutetium see Lutetium (geology) .

Lutetium is a chemical element with the element symbol Lu and the atomic number 71. In the periodic table it is in the group of lanthanoids and is therefore also one of the rare earth metals . Like the other lanthanoids, lutetium is a heavy metal with a silver sheen . Because of the lanthanide contraction , lutetium atoms have the smallest atomic radius , and the element also has the highest density and the highest melting and boiling point of all lanthanides.

The element was discovered in 1907 almost simultaneously, but independently of one another, by Georges Urbain , Carl Auer von Welsbach and Charles James . Although it was decided in 1909 that Urbain was entitled to the discovery and thus the name Lutetium proposed by him was determined, the name Cassiopeium (Cp) proposed by Carl Auer von Welsbach was long common , especially in German-speaking countries .

Lutetium is one of the rarest rare earth metals and is therefore only used economically to a limited extent due to the difficulty in separating it from the other lanthanides. One of the most important applications of the element is the use of lutetium oxyorthosilicate for scintillation counters in positron emission tomography . 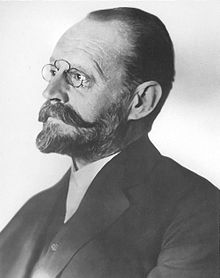 Lutetium was discovered in 1907 as the penultimate lanthanide (only the radioactive and therefore unstable promethium was discovered later) by three chemists almost simultaneously and independently of one another. The French Georges Urbain , the Austrian Carl Auer von Welsbach and the American Charles James examined the ytterbium, discovered in 1878 by Jean Charles Galissard de Marignac , in more detail. Urbain reported on November 4, 1907 in the Paris Académie des sciences that he had obtained two elements from the ytterbium of Marignac by 800-fold fractionation of ytterbium nitrates, which he had obtained from Xenotime . He named these Neo-ytterbium and Lutecium after the old name of Paris, Lutetia .

A short time later, on December 19, 1907, Carl Auer von Welsbach announced, as a result of research that he had carried out since 1905, that he had inferred from the spark spectra of various samples that he had obtained by fractional crystallization of ytterbium ammonium oxalate that this must consist of two different elements. He named these Cassiopeium (Cp, after the constellation Cassiopeia , corresponds to Lutetium) and Aldebaranium (Ab, after the star Aldebaran , corresponds to ytterbium). However, he could not extract any pure substances.

Charles James also worked on the separation of ytterbium with the help of ytterbium magnesium nitrate salts and received larger quantities of the pure salts in 1907. However, after learning of Urbain's discovery, he waived any claims to the discovery of the new element.

In the following time there were some disputes between Urbain and Welsbach - intensified by the political differences between France and Austria-Hungary - about recognition as the legitimate discoverer of the new element and thus also about the right to determine the name of the element. The International Atomic Weight Committee, consisting of Frank Wigglesworth Clarke , Wilhelm Ostwald , Thomas Edward Thorpe and Georges Urbain, finally decided in 1909 on Urbain and its element names. However, the name Neo-ytterbium was changed to Ytterbium. The name Lutetium for the element was finally determined by the IUPAC in 1949 . Until then, many German chemists in particular had clung to the name Cassiopeium.

The exact atomic weight was determined in 1911 by Theodore William Richards using lutetium (III) bromide , which was purified in 15,000 fractional crystallizations . Metallic lutetium was first produced in 1953. 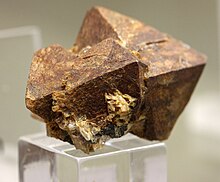 Lutetium is a rare element on earth, its abundance in the continental crust is about 0.8  ppm . It is the rarest lanthanoid after the unstable promethium and thulium , but more common than elements like silver (0.079 ppm), mercury or bismuth .

No lutetium minerals are known, the element always occurs as an admixture in other rare earth minerals, especially those of yttrium and the heavier lanthanoids such as xenotime or gadolinite . Xenotim from Malaysia contains not only yttrium, dysprosium , erbium and ytterbium but also 0.4% lutetium. Bastnäsite, a mineral of the lighter cerite earth, contains only traces of the element, monazite up to 0.1%.

Important sources for lutetium are the xenotime deposits in Malaysia (there as an accompanying mineral to cassiterite ), as well as ion-adsorbing lateritic clay minerals in the southern Chinese provinces of Jiangxi and Guangdong . Because it is difficult to extract, it is only produced and used in small quantities and is expensive. Due to the low demand, the supply of lutetium is not viewed as critical. 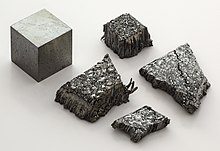 The extraction of lutetium is complicated and time-consuming, especially due to the difficult separation of the lanthanoids. The starting minerals such as monazite or xenotime are first digested with acids or alkalis and brought into solution. The separation of the lutetium from the other lanthanides is then possible by various methods, the separation by ion exchange being the technically most important method for lutetium, as well as for other rare lanthanides. The solution with the rare earths is applied to a suitable resin to which the individual lanthanide ions bind to different degrees. They are then detached from the resin in a separation column with the help of complexing agents such as EDTA , DTPA or HEDTA. The different strengths of binding to the resin thus separate the individual lanthanides.

A recovery of Lutetiummetall is by reduction of Lutetiumfluorid with calcium possible at 1500 to 1600 ° C.

Lutetium is a soft, silvery heavy metal. The lanthanide contraction causes lutetium, the lanthanide with the highest atomic number, to have the smallest atomic radius at 175 pm . As a result, it also has the highest density ( 9.84 g / cm 3) and the highest melting point (1652 ° C) and boiling point (3330 ° C) of all lanthanides.

Lutetium is a typical base metal that reacts with most non-metals , especially at higher temperatures . It reacts slowly with oxygen under standard conditions in dry air, faster in the presence of moisture. Like other base metals, metallic lutetium is flammable, especially if it has a large surface. The reaction of lutetium and hydrogen is not complete, the hydrogen instead enters the octahedral gaps in the metal structure, and non- stoichiometric hydride phases are formed , the exact composition of which depends on the temperature and the hydrogen pressure.

The radionuclide 177 Lu - complexed with ligands such as DOTA - is used as a short-range beta emitter in therapy against neuroendocrine tumors and prostate cancer .

Metallic lutetium is of no economic importance, it is only used in small quantities for scientific purposes. As an alloy, the element, like the other lanthanides, is a component of mischmetal .

In compounds, lutetium can be used as a catalyst for the cracking of petroleum and for polymerization reactions , as a scintillator material in positron emission tomography or as a dopant for magnetic bubble memory made from gadolinium gallium garnet .

Lutetium has no biological significance and is only found in extremely small quantities in the human body. In experiments on rats, it was found that ingested lutetium is mainly stored in the liver and , to a lesser extent, in the bones and spleen .

Little is known about the toxic effects of lutetium and its compounds on living things. In rats, acute toxicity was determined for lutetium chloride with an LD 50 value of 315 mg / kg for intraperitoneal administration and 7100 mg / kg for oral administration over a period of seven days. A chronic toxicity could not be determined. Dissolved lutetium ions are toxic to bacteria such as Aliivibrio fischeri . Lu 3+ ions have an EC 50 value of 1.57 μM and are therefore more toxic in terms of bacterial toxicity than zinc or cadmium ions and are comparable to copper ions .

In compounds, lutetium always occurs in the +3 oxidation state.

A number of organometallic compounds are known. Compounds with a direct bond between lutetium and carbon are only known to a limited extent, since with these, as with many transition metals, secondary reactions such as β-hydride elimination can easily occur. They are therefore stable with sterically demanding residues such as the tert-butyl group or a large number of small residues such as in a hexamethyllutetate complex [Lu (CH 3 ) 6 ] 3+ . The most important ligands of lutetium are cyclopentadienyl and its derivatives. A sandwich complex of lutetium is not known, however; the most important classes are those with the formulas CpLuX 2 , Cp 2 LuX and Cp 3 Lu (X can be a halide, hydride, alkoxide or other). With three cyclopentadienyl ligands, two ligands η 5 and one η 1 are bound as a bridge to another lutetium atom.

Lutetium reacts with oxygen to form lutetium (III) oxide , Lu 2 O 3 , which, like the other trivalent oxides of the heavier lanthanoids, crystallizes in the cubic lanthanoid C structure.

The technically most important lutetium compound is lutetium oxyorthosilicate . This is a scintillator doped with cerium and is used in scintillation counters in positron emission tomography . Due to the very short decay time of 40 ns, it has displaced other materials such as bismuth germanate there .

Lutetium aluminum garnet (LuAG), for example with europium doped, is inter alia, in the infrared - lasers and as phosphor in white light emitting diodes and field emission displays used.