Gadolinium is a chemical element with the element symbol Gd and the ordinal number 64. In the periodic table it is in the group of lanthanoids and is therefore also one of the rare earth metals .

The element was first discovered in 1880 by the Swiss chemist Jean Charles Galissard de Marignac . He examined the components of samarskite and their different solubility in potassium sulfate solutions. Several fractions were formed depending on the solubility. In one of the fractions he found the spectral lines of an unknown element in the absorption spectrum . Since he could not obtain sufficient material for an exact determination, he called this Y α . In addition, he was in another group which also unfamiliar Y β , but this quickly turned out that it is the right from Marc Dela Fontaine and Paul Émile Lecoq de Boisbaudran found samarium acted. After the existence of Y α could be confirmed by William Crookes and Paul Émile Lecoq de Boisbaudran, Lecoq de Boisbaudran named the new element on April 19, 1886 in consultation with Marignac Gadolinium , in honor of the Finnish chemist Johan Gadolin , with the symbol Gd.

Metallic gadolinium was first extracted by Félix Trombe in 1935 . He used the electrolytic reduction of a melt of gadolinium (III) chloride , potassium chloride and lithium chloride at 625–675 ° C on cadmium electrodes . A short time later he discovered the ferromagnetism of the element together with Georges Urbain and Pierre-Ernest Weiss .

Gadolinium is a rare element on earth, its share in the continental crust is about 6.2  ppm .

The element occurs in many minerals of the rare earth metals in different contents. The gadolinium content in minerals of the ytter earth such as xenotime is particularly high . In xenotime deposits from Malaysia the gadolinium content is about 4%. However, monazite also contains 1.5 to 2% of the element, depending on the deposit, whereas in bastnäsite the proportion is lower at 0.15 to 0.7%. There is only one known mineral in which gadolinium is the rare earth metal with the highest percentage. This is the very rare uranyl carbonate lepersonnite (Gd) with the chemical composition Ca (Gd, Dy) 2 (UO 2 ) 24 (SiO 4 ) 4 (CO 3 ) 8 (OH) 24 · 48H 2 O.

Because of the small amounts of gadolinium contained in the ores and the similarity with the other lanthanoids, its separation is difficult. After digestion of the starting materials such as monazite or bastnäsite with sulfuric acid or sodium hydroxide solution , various ways of separation are possible. In addition to ion exchange , a process based on liquid-liquid extraction is particularly important. In the case of bastnäsite as a starting material, the cerium is first separated in the form of cerium (IV) oxide and the remaining rare earths are dissolved in hydrochloric acid. Then, with the help of a mixture of DEHPA (di (2-ethylhexyl) phosphoric acid) and kerosene in liquid-liquid extraction, europium , gadolinium, samarium and the heavier rare earth metals are separated from the light ones. The former can be separated chemically by reduction to bivalent europium and precipitation as poorly soluble europium (II) sulfate . Liquid-liquid extraction is used again to separate gadolinium, samarium and the rest. The mixture is dissolved in dilute hydrochloric acid, treated with a mixture of DEHPA and trimethylbenzenes (Shellsol A) and separated in a mixer-settler apparatus.

The extraction of elementary gadolinium is possible by reducing gadolinium (III) fluoride with calcium .

Gadolinium is only produced and required to a limited extent. As with all rare earth metals, the most important producer is the People's Republic of China . 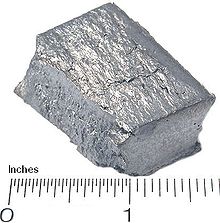 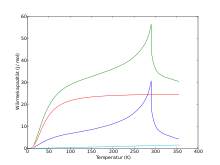 The silver-white to gray-white shiny metal of the rare earths is ductile and malleable. It crystallizes in a hexagonal densest crystal structure with the lattice parameters a = 363 pm and c = 578 pm. Above 1262 ° C, the structure changes into a body-centered cubic structure.

In addition to this high-temperature phase, several high-pressure phases are known. The sequence of the phases corresponds to that of the other lanthanoids (except europium and ytterbium). The hexagonal structure is followed (in each case at room temperature) at pressures above 1.5 GPa, a structure of the samarium type, above 6.5 GPa a double-hexagonal crystal structure is stable. Face-centered cubic packing is most stable at pressures between 26 and 33 GPa. At even higher pressures, a double-cubic face-centered structure and the monoclinic Gd-VIII are known.

Gadolinium is a component of ceramic high-temperature superconductors of the type Ba 2 GdCu 3 O 7-x with a transition temperature of 94.5 K. The pure element is not superconductive .

With 49,000 barn, gadolinium has the highest capture cross-section for thermal neutrons of all known stable elements because of its isotope Gd-157 (with 254,000 barn) . Only the radioactive Xe-135 , with 2.65 million barn, reaches ten times that of Gd-157. The high burn-up rate ( burn-out-rate ) limited use as a control rod in nuclear reactors but significant one.

Gadolinium is relatively stable in dry air; in humid air it forms a non-protective, loosely adhering and flaking oxide layer. It reacts slowly with water. It dissolves in dilute acids . Metallic gadolinium dust is inflammable and explosive.

Gadolinium - Gallium - Garnet was used to manufacture magnetic bubble memory . It is also used in the manufacture of rewritable compact discs .

Additions of 1% gadolinium increase the machinability and the high temperature and oxidation resistance of iron and chromium alloys . Corresponding gadolinium-iron- cobalt alloys can be used for optomagnetic data storage.

Gadolinium, because it has a Curie point close to room temperature , could be used in refrigerators that work on the principle of adiabatic magnetization . Such cooling devices would do without chlorofluorocarbons (CFCs), which could damage the ozone layer, and would have no mechanical parts that wear out . Conversely, an engine can be operated by supplying it with hot and cold water. This could z. B. win the remaining energy from warm industrial wastewater.

Gadolinium is used in the form of gadolinium oxide in modern fuel assemblies as a burnable absorber material which, after a fuel assembly change at the beginning of the operating cycle , limits the excessively high reactivity of the reactor resulting from an excess of nuclear fuel . As the fuel elements burn up, the gadolinium is also degraded.

Intravenously injected gadolinium (III) compounds such as gadopentetate dimeglumine are used as contrast media in examinations in the magnetic resonance tomograph . Due to the high toxicity of free gadolinium ions, complexing agents with a high complexation constant, such as the chelates DTPA (diethylenetriaminepentaacetic acid) and DOTA (1,4,7,10-tetraazacyclododecane-1,4,7,10-tetraacetic acid, with Gd = gadoteric acid) are used ) is used. Because of the seven unpaired electrons in the f-shell , gadolinium ions are strongly paramagnetic . The contrast medium enables the surrounding protons - essentially water - to relax more quickly. This significantly increases the differences in contrast between different tissues in an MRT image. But gadolinium can be deposited in the brain, according to the US FDA. The Federal Association of German Nuclear Medicine (BDN) advises that the funds should only be used for unavoidable examinations for the time being. Gadolinium is administered intravenously, for example, to show tumors and inflammatory changes in the brain. If the blood-liquor barrier is disturbed, an accumulation occurs in the suspicious area and thus provides important diagnostic information.

There is no known biological function of gadolinium.

Free gadolinium ions behave in a similar way to calcium ions, that is, they are mainly built into the liver and the bone system and can remain there for years. Free gadolinium also acts as a calcium antagonist - the ionic radii of calcium and gadolinium are almost the same - the contractility of the myocardium and inhibits the coagulation system .

Solutions of free gadolinium ions applied intravenously are acutely toxic. The smooth and striated muscles, the function of the mitochondria and blood coagulation are affected by the toxicity.

The toxicity of free gadolinium is classified as high. In complexed form, such as the gadolinium in the approved contrast media , it is generally well tolerated, taking the contraindications into account. Since 2006 there have been increasing reports that patients with renal insufficiency may develop nephrogenic systemic fibrosis after administration of various chelates of gadolinium, in particular Gd-DTPA . A new study provides evidence that gadolinium in contrast media could lead to deposits and possibly structural damage in the brain after repeated MRIs . However, it has not yet been possible to determine whether damage will actually occur.