Osmium ( listen ? / I ) is a chemical element with the element symbol Os and atomic number 76; in the periodic table of the elements it is in the 8th group, the iron group . It is a hard, brittle, steel-blue transition metal and belongs to the platinum metals . With 462 GPa, osmium has the highest compression modulus of all elements, only surpassed by aggregated diamond nanorods , and with 22.6 g / cm 3 the highest density .

Biological functions of osmium are not known in human or other organisms . Technically, osmium is only used because of its high price when durability and hardness are crucial.

Osmium, the heaviest homologue of the 8th group in the periodic table, was discovered in 1804 by Smithson Tennant together with iridium in the residue of platinum dissolved in aqua regia . The name "osmium" comes from the radish-like odor ( ancient Greek ὀσμή osmē "smell, stench") of its low concentration volatile tetroxide . The two French chemists Louis-Nicolas Vauquelin and Antoine-François de Fourcroy discovered this metal in platinum at the same time and named it ptène .

The first important application of the metal was its use by Carl Auer von Welsbach as a material for filaments in light bulbs at the beginning of the 20th century . The name of the company Osram is derived from the metals osmium and tungsten used for this purpose . In practice, however, the use of osmium had some disadvantages. In addition to the high price, the difficult processing was a particular problem. Osmium is brittle and cannot be pulled into threads. The filaments were therefore made by spraying an osmium-containing paste and then burning off the organic components. The threads obtained in this way were, however, too thick for high tensions and also sensitive to vibrations and fluctuations in tension. After a short time they were first replaced by tantalum and finally by tungsten.

Osmium is very rare with a proportion of 1 · 10 −8 in the earth's crust . It is almost always with the other platinum metals ruthenium , rhodium , iridium , palladium and platinum socialized . Osmium is often found in solid form , but also in bound form as sulfide , selenide or telluride .

In terms of osmium deposits, a distinction is made between primary and secondary deposits. Primary deposits are copper , nickel , chromium or iron ores , which contain small amounts of platinum metals in bound form. There are no stand-alone osmium ores. In addition to these ores, there are secondary deposits or soap deposits in which osmium and the other platinum metals occur naturally. The metals were washed out by the water after weathering and - due to their high density - have accumulated in suitable places (see gold ). Osmium occurs primarily in the natural alloys Osmiridium and Iridosmium , which, in addition to osmium, primarily contain iridium and are differentiated according to their predominant component.

The most important deposits are the platinum metal-rich nickel ores in Canada ( Sudbury , Ontario ), Russia ( Urals ) and South Africa ( Witwatersrand ). Secondary deposits are located at the foot of the Urals, in Colombia , Ethiopia and Borneo .

Osmium as a mineral

Since the redefinition of the platinum group element minerals and alloys by Donald C. Harris and Louis J. Cabri in 1991, all hexagonal alloys with Os as the main element are addressed as osmium within the ternary system Os-Ir-Ru. The mixed crystal mineral names iridosmin , osmiridium and rutheniridosmium , which were previously used in parallel, are accordingly discredited and are now considered varieties of osmium.

Since this redefinition, osmium has been recognized as an independent mineral by the International Mineralogical Association (IMA). According to the systematics of minerals according to Strunz (9th edition) , osmium is classified under system no. 1.AF.05 (elements - metals and intermetallic compounds - platinum group elements (PGE) - ruthenium group) ( 8th edition : Osmium series I / A.05a ). The systematics of minerals according to Dana , which is mainly used in English-speaking countries , lists the element mineral under the system no. 02/01/02/01

In total, more than 200 sites for native osmium and its varieties are known worldwide (as of 2017).

The production of osmium is complex and takes place in the course of the extraction of other precious metals such as gold or platinum . The methods used for this use the different properties of the individual precious metals and their compounds, whereby the elements are gradually separated from one another.

Ores containing precious metals or anode sludge from nickel or gold mining are used as the starting material . The ore is first dissolved in aqua regia . Gold, palladium and platinum go into solution, the other platinum metals and silver remain behind. The silver initially reacts to form insoluble silver chloride , which can be removed with lead carbonate and nitric acid (formation of silver nitrate ). Rhodium can be dissolved and separated off as rhodium (III) sulfate by melting it with sodium hydrogen sulfate and then leaching it . Thereafter, the remaining residue is melted with sodium peroxide , whereby osmium and ruthenium are dissolved and the insoluble iridium remains. When this solution is treated with chlorine, the volatile substances ruthenium tetroxide and osmium tetroxide are formed . When alcoholic caustic soda is added, only osmium tetroxide dissolves and can be separated from the ruthenium in this way. The osmium is precipitated as a complex with ammonium chloride and finally reduced to metallic osmium with hydrogen :

Osmium is only obtained in very small quantities, the production quantity is around 100 kg per year worldwide. 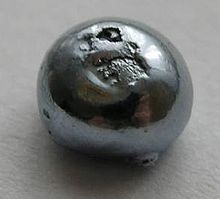 Osmium as a melting pearl

Metallic osmium is a heavy metal that shines even at higher temperatures and has a steel blue color. It crystallizes in a hexagonal close packing of spheres in the space group P 6 3 / mmc (space group no. 194) with the lattice parameters a = 273.5 pm, c = 431.9 pm and two formula units per unit cell. Template: room group / 194

Osmium is the element with the highest density before iridium . Crystallographic calculations result in osmium 22.59 g / cm 3 and for iridium 22.56 g / cm 3 in the natural isotope ratio . This makes osmium the densest naturally occurring element on earth.

Of all platinum metals, osmium has the highest melting point and the lowest vapor pressure . Its compression modulus of 462  GPa is among the highest of all known elements and compounds; it is even less compressible than diamond with 443  GPa , only aggregated diamond nanorods are even harder (up to 491 GPa ). Below the transition temperature of 0.66 K, osmium becomes a superconductor .

Osmium belongs to the noble metals and is therefore inert. It only reacts directly with the non-metals fluorine , chlorine and oxygen . A reaction between oxygen and compact osmium only takes place when it is red heat . Depending on the reaction conditions, osmium tetroxide (less high temperatures, high oxygen pressure ) or osmium trioxide (only stable in the gas phase) is formed. Finely divided osmium forms traces of highly toxic osmium tetroxide even at room temperature.

Osmium collector bars (made from pressed and sintered powder) in front of iron and aluminum bars of equal weight (1 troy ounce each  ). The difference in size illustrates the different densities of these elements.

Due to its rarity, its complicated manufacturing process and the associated high price of 400 US dollars per troy ounce (as of Nov. 2018), there are relatively few technical applications for the element  . Due to the high toxicity of the oxides, osmium is rarely used in its pure state. Hard osmium-containing alloys of platinum metals are used in abrasive and wearing applications such as in the tips of fountain pens, phonographic scanning needles, shafts and tenons in instrument construction as well as electrical contacts . An alloy of 90% platinum and 10% osmium is processed into medical implants and artificial heart valves and used in pacemakers . Sometimes osmium is used as a catalyst for hydrogenation . Osmium was also used in an alloy with tungsten in the filaments of Osram light bulbs.

In modern analytics this evidence is no longer important; Today, osmium can not only be detected using instrumental methods such as neutron activation analysis , voltammetry , atomic spectrometry or mass spectrometry , but can also be quantified with high accuracy . The NMR spectroscopy and X-ray diffraction enable the structural analysis of organic and inorganic osmium.

Osmium tetroxide is poisonous. Dusts can cause lung irritation with hyperemia up to pulmonary edema and lead to skin or eye damage. Since small amounts of osmium tetroxide are always formed from powdered metallic osmium in air, caution is advised with this form of the element.

Metallic osmium is highly flammable as a finely divided powder or dust , but not flammable in compact form. To extinguish osmium fires, metal fire extinguishers (class D) or extinguishing powder must be used, under no circumstances may water be used because of the risk of explosion from the hydrogen produced .

Compounds and complexes in the oxidation state from −II to + VIII are known, the most stable oxidation state is + IV. Osmium, together with ruthenium and xenon, is one of the few elements that reach the highest known oxidation state + VIII. Osmium forms compounds with most non-metals such as oxides , halides , sulfides , tellurides , and phosphides .

Osmium tetroxide OsO 4 is the best-known compound of osmium and one of the few stable compounds in which osmium has the + VIII oxidation state . The compound is formed by the action of oxidizing agents such as nitric acid on metallic osmium. It is a volatile solid that has a very strong oxidizing effect. In contrast to many other oxidizing agents, the reaction can proceed under stereochemical control. Because of these properties, the compound has found some uses in spite of its high toxicity and high price. Osmium tetroxide is often only used in catalytic amounts.

It is used to fix and enhance the contrast of lipids (fats) and cell membranes in electron microscopy and for securing evidence ( fingerprints ). In organic chemistry it is used as an oxidizing agent for the cis- hydroxylation of alkenes to vicinal diols and in the Jacobsen-Katsuki reaction or in the Sharpless epoxidation for stereoselective epoxidation.

A large number of compounds are known with the halogens fluorine , chlorine , bromine and iodine . The possible oxidation states of the osmium range from + VII for osmium (VII) fluoride to + I for osmium (I) iodide .

Furthermore, compounds with arsenic and sulfur are known, which also occur in nature and are recognized as minerals erlichmanite (OsS 2 ), osarsite (OsAsS) and omeiite (OsAs 2 ).

In addition to these compounds, numerous complex compounds are known. Osmates , anionic complexes of osmium , are derived from osmium tetroxide . Many complexes in various oxidation states are also known with other ligands such as ammonia , carbon monoxide , cyanide and nitrogen monoxide . The osmium complex osmocene , which belongs to the metallocenes , can be formed with organic ligands such as cyclopentadiene . In addition to classical complexes, in which each metal-ligand bond can be clearly determined, there are also non-classical complexes. These have metal clusters made up of several osmium atoms. Its specific shape can be determined with the help of the Wade rules .