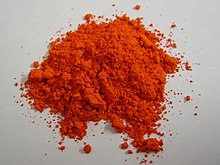 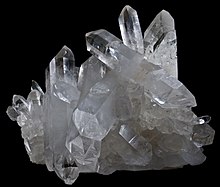 Corundum crystals are a naturally occurring, colorless modification of aluminum oxide . Well-known color varieties are the blue sapphire (colored by Fe / Ti) and the red ruby (colored by Cr). 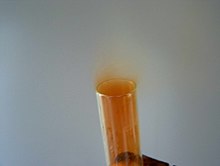 Oxides (also commonly known as oxides ; from Greek ὀξύς, oxýs, sharp, pointed, acidic) are oxygen compounds of an element in which it has the oxidation number −II. Most oxides are formed when flammable substances react with oxygen (origin of the word oxidation ): When they oxidize, they release electrons to the oxidizing agent oxygen, so that oxides are formed.

Depending on the binding partner, there are two groups of oxides in chemistry :

According to their stoichiometric composition, a distinction is made between monoxides, dioxides, trioxides, tetroxides, pentoxides, such as carbon monoxide, chlorine dioxide and sulfur trioxide. The majority of the earth's crust and mantle consists of oxides (mainly silicon dioxide ( quartz ) and salts derived from it, the silicates and aluminum oxide). Also water belongs to the group of oxides. Ethylene oxide is an example of an organic oxide.

Oxides are made by:

The black copper (II) oxide shown above can therefore be used, for. B. be synthesized by the following reactions :

Furthermore, the red copper (I) oxide could be converted into black copper (II) oxide by means of oxygen. Copper (II) oxide is also produced when roasting sulphidic copper ores by annealing copper (II) sulphide in air or in a stream of oxygen (by-product sulfur dioxide).

How easily a metal forms an oxide depends on the electronegativity and oxygen affinity of the element. The less noble a metal, the more violently it can generally react with oxygen and form oxides. In addition, the reactivity also depends on the passivation of an element, since with many elements a tightly adhering oxide layer prevents further reaction. The metal can only react further if this is permeable to oxygen or is removed.

Properties of the oxides

There are - classified according to their reaction with water - acidic, basic, amphoteric and indifferent oxides

The O 2− ion on which the metal oxides are based is formed during the redox reaction of the oxidizing agent oxygen with a metal . It only exists in melts and in combination with cations (in the form of salts ), but not as a free ion , because it is an extremely strong base and is thus quantitatively protonated to the hydroxide ion in aqueous solution ( acid-base reaction ) . Metal hydroxides contain the OH - ion and are mostly obtained from salt solutions and alkalis.

In non-metal oxides there is usually no oxide anion, since non-metals form a covalent bond with one another. The peroxide ion, which is similar to the oxide ion, has an oxidation number of −I instead of −II, since two oxygen atoms are connected to one another. Non-metal oxides react with water to form acids (with oxo anions such as sulfate, carbonate, etc.). They are therefore to be regarded as hydroxides of acidic character.

The binding capacity of oxygen

Oxygen is a strong oxidizing agent and forms isolable oxides with almost all elements , with the exception of the noble gases helium , neon , argon , krypton and the halogen fluorine (fluorine occupies a special position here because the oxygen compounds OF 2 , O 2 F 2 and O 4 F 2 can be represented, but because of the higher electronegativity of fluorine , these substances are not referred to as fluoroxides, but rather as oxygen fluorides ).

Natural metal oxides serve as ores for metal extraction. The oxygen is removed from them by smelting - for example by means of carbon ( blast furnace process ) - and the pure metal is obtained.

Metal oxides were used as pigments as early as the Stone Age and were also called earth pigments.

Another application in recent times is its use as an isolator in information technology .

Individual oxides and other oxygen compounds

A rusted lock on a container: iron slowly oxidizes to rust in the presence of water and air

Oxygen compounds with oxygen in other oxidation states are: