The title of this article is ambiguous. Further meanings are listed under Ion (disambiguation) .

An ion [ i̯oːn ] is an electrically charged atom or molecule .

Fast ions moving in one direction are studied or used in atomic physics , nuclear physics and particle physics , see ion radiation , ion source or particle accelerator . A plasma (e.g. inside the stars ) is a disordered ensemble of ions (mostly completely ionized, i.e. electronless atomic nuclei) and the split off electrons , which both move randomly in all directions like the molecules of a gas , corresponding to the high temperature but much faster.

The following statements essentially relate to slow or stationary ions.

In his research on electricity , Michael Faraday was dissatisfied with the terms that were available to him to describe chemical decomposition under the influence of electric current. He therefore turned to William Whewell, among others, in early 1834 . He suggested the terms ion , cation and anion , among others ; since then they have been used by Faraday. They then quickly spread through scientific nomenclature .

If you mix table salt and water, the sodium and chloride ions are dissolved in the water , ie separated from each other and surrounded individually by water molecules.

Ions form from atoms when they release or accept electrons. Although the separation of charges requires energy, the ions formed can be energetically favorable if they have particularly stable configurations, for example if they meet the octet rule .

Positively charged ions, so-called cations , are formed when atoms release electrons. Since the atomic nucleus still has an identical positive charge (in the neutral atom the number of protons in the nucleus corresponds exactly to the number of electrons surrounding it), the ion appears in its entirety as a positively charged particle.

The aqueous milieus of cells and organisms ( electrolyte solution) are mentioned as an example . Here they play a decisive role for the electrical processes in membranes , especially for excitability ( membrane potential , action potential ).

The ion charge indicates how many positive or negative electrical charges an ion has. It is indicated by a superscript Arabic number followed by a plus or minus sign. The general form is A n - or A n + . 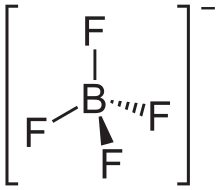 The complex anion of tetrafluoroboric acid

In the case of complex ions, the molecule is put in square brackets and the ion charge is given in superscript behind the brackets.

In spectroscopy , Roman numerals are also used to identify the spectra of ionized atoms , with spectral lines of the neutral atom being denoted by I (one). For example, "He I" is assigned to the lines of neutral helium and "C IV" to the lines of triple ionized carbon .

Properties of the ions

The radius of ions differs from that of the corresponding atom. The cation radius is smaller - due to the non-occupancy of the outer atomic orbitals - that of the anions is usually larger, since the outer orbitals are filled with electrons and / or other orbitals are newly occupied. Depending on the ratio of charge to radius, ions have different polarizing effects in chemical bonds .

Ions of different charge form salts through ionic bonding . Solutions that contain ionic substances conduct electricity and are therefore called electrolytes . The cause of the conduction of the electric current is the translational mobility of the ions within the solution. Information about the translational mobility of ions in the electrolyte solution, such as their diffusion coefficient or their mobility in an electric field, can be obtained using field gradient NMR methods. The measurement of can also take place with the “classical method” of the “moving boundary”.

A cyclic ion is an ion that is built up in a ring structure ( cyclic compounds ).

Ions with more than three under or excess charges are rarely found in chemistry .

In physics ions at specific experimental purposes, for example, ion sources produced, but they are also found in nature, such as the solar wind , the Rekombinationsleuchten of meteors in auroras , during a thunderstorm lightning or a Elmsfeuer (see also electric meteors ).

In the case of molecules with two or more functional groups , it can happen that they have a positive charge on one group and a negative charge on another (overall, the molecule is then neutral). Such polar molecules are also known as zwitterions .

Electrolytes play an important role in metabolism processes and in batteries , for. B. Lithium-ion batteries .