Impact ionization by an electron

Another form of ionization, which is particularly relevant in chemistry, is the attachment of electrons to a neutral atom or molecule, so that a negatively charged ion ( anion ) is created. Also, chemical ionization effected by addition of ions (protons, cations, anions), for example. B. in mass spectrometry .

If the nucleus of an atom is pushed out of the electron shell - e.g. B. by a fast neutron - it also becomes an ion. However, the term ionization is not common for this process.

In the literature, there are also formulations such as "acids that give weakly nucleophilic anions when ionized - such. B. HSO 4 - from H 2 SO 4 - can be broken down into […]. ” In a broader sense, the elimination of a proton in an acid-base reaction can also be subsumed under the term ionization.

Various processes can lead to ionization:

To describe the impact ionization process , symbols such as (e, 2e), (e, 3e), (γ, 2e) etc. are often used - analogous to the notation in nuclear reactions . The first character in brackets stands for the projectile. After the decimal point are the free particles produced (in addition to the ionized atom and including the projectile, provided that it is not absorbed - as in the case of the photon ). For example, “2e” means that two free electrons leave the atom. In (e, 2e) a single ionized atom is produced by the collision of an electron with an atom, in (γ, 2e) a doubly ionized atom is produced by the interaction of a photon with an atom.

Ionization energy as a function of the atomic number

Plasma is matter with a sufficiently high proportion of free ions and electrons, i.e. high ionization. This qualitative definition is not limited to gases with a low density, but also includes compressed matter with the properties of a liquid. In the case of gases, a distinction is made between low , atmospheric and high pressure plasmas . Almost all of the visible matter in the universe is more or less strongly ionized. 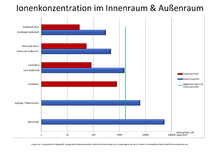 Ion concentrations in the outside and inside air

Air that is ionized by means of ionizers , i.e. electrically conductive air, is used in the processing of products that can become electrostatically charged, e.g. B. Foil or paper rolls. The conductivity of the air reduces the charge and thus eliminates the risk of sparks and the attraction of unwanted dust particles. Transport is also made easier.

Level of ion content in natural and indoor environments:

These ion concentrations are measured with an ionometer. Here the polarity and the respective concentration of the ions can be determined. In nature, the ratio of the natural polarity of the ions is usually balanced, with a slight tendency towards more positively charged ions. The ion concentration depends on the geological composition, the geographical location and the weather conditions.

Ionized air is used, for example, in the food industry for the pasteurization of beer and other beverages. In beverage filling, the bottle is blown out with ionized air before filling begins in order to kill microorganisms.

Ionizing radiation is used in industrial sterilization (e.g. of single-use medical items, to kill insects, inactivation of enzymes). In hospitals which has plasma sterilization , the gas sterilization largely replaced.

In some cases , the generation of ions in direct or indirect ionization creates radicals that lead to chemical reactions and, among other things, the formation of ozone , nitrogen oxides and other pollutants. Ozone can affect the human respiratory system and promote corrosion . The direct ionization (mainly of water molecules) in the human body by radiation leads to the formation of H + and OH - radicals, which attack organic molecules.