The electric field is a ubiquitous phenomenon. It explains, for example, the transmission of electrical energy and the function of electronic circuits. It causes electrons to bind to the atomic nucleus and thus influences the shape of matter . Its combination with magnetism , the electromagnetic field , explains the propagation of light and radio waves.

Description as a vector field

.
The field emanating from the test charge itself and other forces such as gravity are neglected .

1. The area integral of the electrical flux density over a closed area (e.g. a spherical surface) is, according to Gaussian law , the same size as the charge contained in the enclosed volume.

Gaussian law applies regardless of time. Accordingly, it is associated with the idea that the electrical source field caused by charges is already present in the entire room and is not only spreading.
2. A temporal change in the electrical flux density acts like an electrical current and appears as a displacement current in the expanded Ampère's law .

with the electric field constant and the permittivity number .

In the vacuum with the relationship between two fields strictly linear, and: .

A clear idea of ​​electric fields can be obtained from field line images . These consist of oriented field lines (marked with arrows) . The following applies:

Electric field of a point charge

The electric field of a point charge is particularly easy to determine. According to Coulomb's law , the field strength at a given point is:

Here stands for the field generating charge at the origin of the coordinate system, for the position vector of the given point, for the associated unit vector , for the electric field constant and for the relative permittivity.

Electric field of any charge distribution

If there is a continuous charge distribution given by the spatial charge density , the following applies accordingly:

Electric field of a line charge

The electric field of a line charge (an infinitely long, charged wire) with the linear charge density is given by

The basis vector is directed radially from the line charge to the reference point.

Electric field of a surface charge 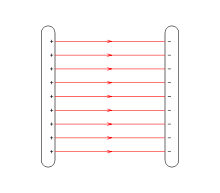 Electric field in a plate capacitor

The electric field between two large plane-parallel capacitor plates that contain charges of the same amount but different signs is approximately homogeneous (strictly homogeneous if the plates are infinitely large). The following applies to the amount of field strength:

This is the distance between the plates, the area of ​​a capacitor plate, the voltage between the two plates and the amount of charge on a plate. The potential changes linearly from one plate to the other by the amount . If the plates are moved apart, the field strength remains constant and the voltage increases. The work done against the electrostatic attraction is in the energy of the field . Outside the capacitor, the field strength is (ideally) 0.

The charges on the capacitor plates are evenly distributed over the facing plate surfaces. The absolute amounts of surface charge density

and the electrical flux density match. However, it is a scalar quantity, whereas it is a vector.

Electric field of a dipole 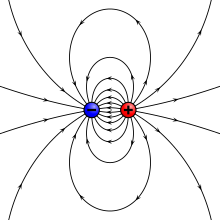 Electric field of a dipole. 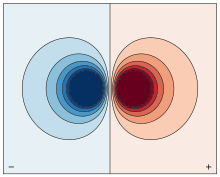 An electric dipole , an arrangement of two point charges and at a distance , creates a rotationally symmetrical field. For the field strength components parallel and perpendicular to the dipole axis the following applies at a large distance in direction ϑ :

Here, ϑ = 0 points from the center in the direction of the positive charge.

Exactly the formula applies in the limit crossing for vanishing with constant magnitude of the dipole moment .

Conductor in the electric field

If you slowly bring a conductor into an external field that is constant over time, it causes a charge shift ( influence ) in the conductor . The inside remains free of space charges, while a charge distribution is established on the surface that keeps the inside of the conductor free of fields. Outside the field lines are always and everywhere perpendicular to the conductor surface, otherwise the transverse component would cause a further charge shift. High field strengths arise at the tips.

Link with the magnetic field

The electric field in general terms is both location- and time-dependent . It is closely linked to the magnetic field via the Maxwell equations and the special theory of relativity . In the special theory of relativity, its vector components are therefore inseparably combined with those of the magnetic field to form a tensor . Depending on the frame of reference in which one is as an observer, i. H. In which relative movement to any space charges that may be present, the electric field is transformed into a magnetic field and vice versa via the Lorentz transformation .

Difference between electrostatics and electrodynamics

In electrostatics , only static charges are considered. Without currents there is no magnetic field. The electrostatic field is therefore not only stationary , i.e. unchangeable over time, but also rotation-free (eddy-free). Such a field can be described by a potential .

Action at close range instead of action from a distance

Until Heinrich Hertz verified electromagnetic waves , the question was whether the forces acting between electrical charges come about directly in the sense of a long-distance effect or through the mediation of space (close-up effect).

As long as only slow changes of the electrical and magnetic quantities are considered, it is not decisive whether one connects one or the other idea with the physical phenomena. However, if one takes into account that impulses and energy can propagate in space with electromagnetic waves, it is difficult to reconcile the idea of ​​an effect at a distance with the observations.

Quantization of the electric field

In the context of quantum mechanics , the fields are usually still regarded as classic, even if the states of the interacting particles are quantized . Quantum field theories combine principles of classical field theories (e.g. electrodynamics) and describe particles and fields in a uniform way. Not only observables (i.e. observable quantities) such as energy or momentum are quantized, but also the interacting (particle) fields themselves; the fields are treated similarly to observables. The quantization of the fields is also known as the second quantization .