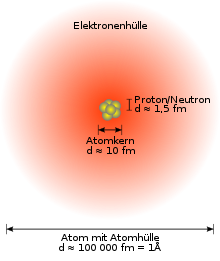 Schematic representation of the atom (not to scale, otherwise the lower arrow would be approx. 100 m long).

In terms that concern the atomic nucleus, the prefix “atom-” was mostly used in the beginning, later largely replaced by the prefix nuclear- borrowed from the Latin word nucleus ( nut or pine nut ) . It describes things or effects that are related to properties or reactions of atomic nuclei, for example nuclear medicine . The individual types of atoms are called nuclides according to the structure of their atomic nuclei .

Structure of the atomic nucleus

The atomic nucleus is, to put it plainly, in the center of the atom; its diameter is about 1 ⁄ 20,000 to 1 ⁄ 150,000 of the diameter of the electron shell . A helium atomic nucleus e.g. B. is around 1 fm (femtometer) in size. However, the atomic nucleus concentrates more than 99.9 percent of the mass of the entire atom.

The density of the core (the ratio of core mass to core volume) is approximately the same for all cores and is around 2 · 10 17  kg / m³. To achieve this density, for example, one would have to squeeze the Eiffel Tower to the size of a grain of sand.

The nucleus is made up of protons and neutrons , which together are also called nucleons . The number of protons is the atomic number , the total number of nucleons mass number called the core (for details about the mass of the nucleus see nuclear mass or mass defect ). The mass numbers of atoms naturally occurring on earth vary from 1 ( hydrogen ) to 244 ( plutonium ). The macroscopic density of condensed matter, on the other hand, varies much less because the atomic radius is determined by the atomic shell, which varies more with the chemical character of the atoms than with the mass number. Nevertheless, so-called heavy atomic nuclei also belong to colloquially / technically heavy elements. For example, lithium (mass numbers 6 and 7) has a density of 0.53 g / cm³, while gold (mass number 197) has a density of 19.3 g / cm³.

Protons are positively charged, neutrons are uncharged. The atomic nucleus is therefore positively charged and can bind negatively charged electrons to itself through the Coulomb force . Since the electrical charge of the electron is equal to the charge of the proton up to the sign , an externally electrically neutral atom must have as many electrons in the atomic shell as protons in the nucleus. Since the atomic shell largely determines the chemical properties, the atomic number also determines which element the atom belongs to, it is the chemical atomic number . Neutrons have roughly the same mass as protons. Their number has only a minor influence on the chemical properties of the atom, but is decisive for the stability or instability ( radioactivity ) of the nucleus. If electrons are removed or added through chemical or physical effects, the atom is electrically charged to the outside and is called an ion . This does not change anything in the atomic nucleus. Apart from radioactive decay - which occurs spontaneously - the number of protons or neutrons in the nucleus can only change through a nuclear reaction , i.e. as a result of a collision with other particles.

A type of atom or atomic nucleus determined by atomic number and mass number is called a nuclide . When isomers nucleus places are the core in durable excitation levels (see below) called; they count as their own nuclides. If one differentiates between nuclei (or whole atoms) of the same element, i.e. with the same number of protons, according to their number of neutrons, one speaks of the isotopes of the element concerned. Nuclides are designated with the chemical element symbol and the mass number, such as B. the most common carbon isotope 12 C or the most common iron isotope 56 Fe (with isomers still with an addition such as “m” for “metastable”). Common, but is redundant and the spelling with mass number and atomic number: .

A total of around 3200 long-lived nuclides are known (as of 2003), which are distributed over around 2700 isotopes and 118 known elements from hydrogen to oganesson . There are around 250 stable isotopes among them. The stability of a nuclide depends on the number of protons and neutrons. If the number of protons is 43 or 61, or greater than 82, or if the ratio of the two numbers is unfavorable, the nucleus is unstable; H. radioactive, and transforms into a more stable nucleus.

The positively charged protons in the nucleus repel each other due to the Coulomb force . Since the nucleus does not fly apart anyway, another force must exist in the nucleus with which the nucleons attract each other and which is stronger than the Coulomb force. This force is called nuclear power (not to be confused with the colloquial term “nuclear power” for nuclear energy ); it is a residual interaction of the strong interaction . Up until now, nuclear power has only been described approximately. Their explanation is, among other things, the subject of nuclear physics . What is certain, however, is the very short range of the nuclear force, which is in the order of magnitude of the nucleon diameter (approx. 1 fm = 10 −15  m). The very short range limits the possible size of atomic nuclei, because a proton on the "surface" of a large nucleus only feels the attraction of its nearest neighbor nucleons, whereas the Coulomb repulsion of all other protons in the nucleus feels . If a sufficient number of other protons are present, then ultimately the repulsion predominates. With the number of protons 82, lead is the last element with stable isotopes, all others are radioactive (see decay series ). The largest nuclear charge observed in natural occurrences is 92 ( uranium ). Nuclei with even more protons ( transuranic elements ) do not “live” long enough to appear as primordial nuclides ; they can only be observed in nuclear reactions after artificial production.

Representation of nuclear fission - chain reaction on a commemorative coin

The binding energy corresponds to the work that would have to be expended in order to break down the nucleus into its individual nucleons. Conversely, this binding energy would be released if it were possible to assemble an atomic nucleus from free protons and neutrons. Because of the equivalence of mass and energy , the formation of the nucleus leads to a mass defect . This means that every atomic nucleus (except 1 H) has a lower mass than results from adding the - unbound - nucleons that form it.

The binding energy per nucleon is different in different nuclei. The energy gain or loss in nuclear reactions is based on these differences in the binding energy per nucleon, i.e. in particular the possibility of obtaining energy from nuclear reactions on an industrial scale. In the fusion of He-4 from smaller nuclei, this energy is particularly high, which is to be used for technical nuclear fusion . Energy is released in nuclear fusions up to the formation of iron, which is why the fusions in stars end there. For the fusion to elements of higher ordinal numbers, however, energy supply is necessary, as it is only available as a supernova when large stars explode at the end of their life . On the other hand, when these heavy atomic nuclei split, energy is released, which is used technically for energy generation in U-235 and other fissile materials.

Like the electron shell, atomic nuclei have discrete energy levels . (The sequence of these levels continues above the binding energy of a nucleon, which is shown, for example, in the resonances of the excitation function of nuclear reactions.) An undisturbed nucleus is normally in its lowest energy level, the ground state . The higher levels ( excited states) are not stable, but sooner or later the nucleus changes from there to a more stable state, usually the ground state, whereby the energy difference is given off as a photon ( gamma radiation ) or to an electron in the K shell. Particularly long-lived ( metastable ) excited states are called isomers .

The term radioactivity describes the property of unstable atomic nuclei to transform themselves spontaneously with the release of energy. Most of the elements have only a few stable isotopes or even only one ; there are no stable isotopes for the atomic numbers 43 ( technetium ), 61 ( promethium ) and all above 82 ( lead ).

In the case of unstable atomic nuclei, a distinction is essentially made between three types of decay:

Because of the above-mentioned existence of short-range attractive and long-range repulsive forces in the nucleus, the binding energy per nucleon decreases towards high mass numbers. Therefore, alpha decay occurs in some nuclides with mass numbers above about 140, and spontaneous splitting above about 230 . Both types of decay lead to nuclides with lower mass numbers.

The release of gamma radiation requires that the nucleus is in an excited state (see section on energy levels ) and therefore mainly occurs immediately after an alpha or beta decay, provided this does not lead directly to the basic state of the daughter nucleus . That is why the gamma emission is sometimes referred to as gamma "decay", analogous to the other processes of radioactivity.

In nuclear physics there is no uniform model for a comprehensive description of all processes in the atomic nucleus. Compared to atomic physics with the successful quantum mechanical atomic model , a special, massive center of force is missing in the core, and the forces between the nucleons are much more complicated than the purely electromagnetic interaction in the atom. Therefore, different core models are used for different questions. The most important are:

In addition to these models, there are others that are used for more specific purposes:

The models of the atomic nucleus show two opposite, greatly simplified starting points:

Realistic models are characterized by a suitable combination of both approaches.

The following relationships can be established between the individual models:

Each of the models mentioned can only be used for a specific area of ​​nuclear phenomena; a consistent and comprehensive theory has not yet been formulated.

Rutherford's discovery of the atomic nucleus

The key experiment that led to the discovery of the atomic nucleus was carried out by doctoral student Ernest Marsden in the laboratory of Nobel Prize winner Ernest Rutherford on December 20, 1910. During control experiments to produce a sharply delimited beam of α-particles, he had noticed that the particles were allowed to pass through thin metal foils 99.99% of the time you can walk through it with almost no distraction, but in isolated cases you can be distracted by more than 90 °. The strong deflection contradicted the expected result: According to the Thomsonian model of the atom ("raisin cake model", English plum pudding model ) adopted at the time, the atom would have consisted of electrons floating in a diffuse, positively charged cloud. It was known that α-particles are ionized atoms of the noble gas helium and that they cannot deviate that far from their orbit either from positively charged clouds or from numerous collisions with electrons. The purpose of the experiments was actually to investigate the properties of this cloud more closely. Rutherford interpreted the unexpected result to mean that the atoms of the foil largely consisted of empty space, which allowed the alpha particles to pass unhindered, while small, electrically charged and very massive particles existed in it, which the alpha particles very strongly from one of the rare particularly close collisions could throw their course. Brief rough calculations showed Rutherford that these “nuclei” had to be at least 1000 times smaller than the atom, but contain practically all of its mass.