An atom is assigned an atomic radius with which its spatial size can be approximated. An absolute radius of an atom - and therefore also an absolute size - cannot be specified, because an atom shows different effective sizes depending on the chemical bond type and, according to the ideas of quantum mechanics, has no defined limit anyway. The atomic radius is determined from the distance between the atomic nuclei in the chemical compounds of the relevant type:

Relation to the position in the periodic table

Illustration of the proportions of the covalent atomic radii of the elements of the periodic table (to scale).

The atomic radii increase from top to bottom within a group of the periodic table and decrease from left to right within a period. This is explained by the fact that the atomic number and thus the positive charge of the nucleus increase within a period . Thus the negative electrons of the atom are more strongly attracted. The reduction in the atomic radius within the period from halogen to noble gas can be attributed to the particularly stable electron configuration of the noble gases. The increase in radius, from one row to the next within each group, results from the fact that new shells are filled with electrons.

Pictures 1 and 2. On the left the cubic-primitive grid. In the closest packing of spheres (right), the centers of the atoms in a plane form equilateral triangles and, with one atom from the plane above, tetrahedra

Characterized to an array of atoms by a straight line, the auffädelt the atom center points, the distance between two rows in one plane in the cubic primitive / sc-grid is just D . In the face-centered cubic / fcc lattice it is smaller, namely D · (√3 / 2) (= height of an equilateral triangle) and the distance between two planes is equal to the height of a tetrahedron [D · √ (2/3)]. From the product of the two factors one finds: A fictitious gold cube with a cubic primitive crystal structure would have a volume √2 ≈ 1.41421 larger, or its density would be √2 smaller. If one carries out the calculation with the lower density, one obtains D = 288 pm or r = 144 pm, in agreement with the result from the X-ray diffraction. 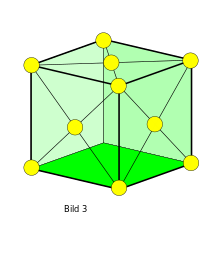 Fig. 3. The face-centered cubic cell contains six half atoms on the faces and one eighth of the eight atoms at the corners, so together they contain four whole atoms.

The classic crystallographic method counts how many atoms there are in a unit cell. In the case of face-centered cubic (fcc), this contains parts of four whole atoms (Fig. 3). The volume in which there are four atoms can be determined from the atomic mass, the density and the Avogadro number, i.e. the size of the unit cell (in this case, the shape of a cube). The diameter of an atom is the distance between the centers of two atoms that are closest to each other in the cell. They are arranged along the diagonal of the surface (and not along the edge, since they are further apart). This is four atomic radii long (in Figure 3, the atoms are shown smaller for the sake of clarity). The edge length, the length of the diagonal and thus the atomic radius are obtained from the volume. With the cubic-primitive unit cell, the calculation can also be carried out for polonium.